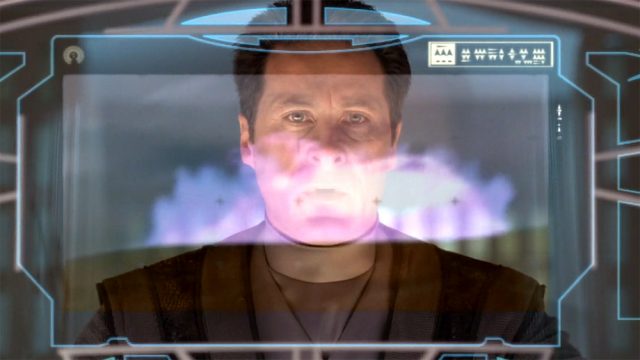 “I’m asking you to do the right thing. And you know it.”
– Colonel Jack O’Neill

One of my favorite things about the Stargate franchise, and especially Stargate SG-1, is its focus on ethics. It’s one of the most consistent thematic through-lines of the franchise, and I don’t know of any other television show that focused on ethics in quite the same way. Other shows that deal with ethics usually do so either from a “root for the bad guy” or “the ends justify the means” angle, like Breaking Bad or Dexter. But not Stargate.

Stargate focused on ethics from the point of view of fallible human beings who were nevertheless committed to try and do what was right at all times, often regardless of the consequences. It was an incredibly positive message.

From the beginning, the members of the SG-1 team displayed a strong ethical standard. Some early episodes, such as “The Broca Divide,” explored the concept of situational ethics. Here Daniel wonders whether they have the right to interfere in an apparently pre-historic mating practice. Sam vehemently disagrees, calling it rape. Before they can react further, the People of the Land of Light intervene and the team (and the show’s writers) are spared the decision. 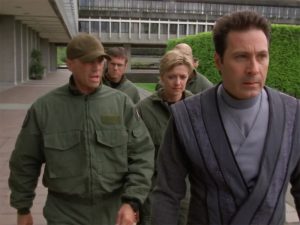 SG-1 often faced ethical quandaries in its missions — including an ill-fated mission to the planet Tollan. From “Between Two Fires”

But other than a few moments like this, Stargate SG-1 almost always came down firmly on the side of a non-situational ethic: for the team there is an immovable ethical standard of behavior to which they seek to adhere. And when they fail to do so, or think they might have failed to do so (even by accident), there is always a sober moment of reflection.

In this way, SG-1 stands apart even from Atlantis and Universe. The writers of the original show never let the team off the hook with a firm, apparently unchallenged statement of justification the way they sometimes did on the spin-offs (like the genocide of the Asurans in “Be All My Sins Remember’d,” or even the willingness to use torture in “Critical Mass”).

In that way the show was very hard on its main characters, keeping them accountable even when they made a decision that arguably had to be made — such as betraying Fifth in Season Six’s “Unnatural Selection.” The show had an extremely deep sense of an immutable ethical standard.

The quote at the opening of this article is from Colonel Jack O’Neill near the end of the fifth season episode “Between Two Fires.” In this episode, SG-1 travels to Tollana for the funeral of their old frenemy, Omac. While there they interact with Chancellor Travell from the Tollan governmental body, the Curia, and their friend Narim. The team soon discovers that not all is as it seems, and with Narim’s help they make an unsettling discovery: the Curia is working with a Goa’uld. 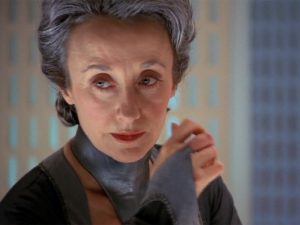 High Chancellor Travell (Marie Stillin) finds herself in over her head with the Goa’uld.

In the hopes of saving their own planet, they are helping the Goa’uld build weapons of mass destruction, utilizing Tollan phase-shift technology that will allow the bombs to be deployed through any barrier – even Earth’s iris. When SG-1 learns the truth, O’Neill asks Narim to help them destroy the weapons.

Now Narim is faced with a terrible dilemma. He knows that the destruction of these news weapons will trigger a Goa’uld attack on the planet. In anguish, he tells Colonel O’Neill that he is being asked to put his whole planet at risk. O’Neill argues that what he is asking Narim to do is save Earth and countless other planets from destruction.

Jack finishes with the powerful line quoted above: “I’m asking you to do the right thing. And you know it.” And Narim does.

That isn’t the only moment of ethical conviction in the episode. Tanith, the Goa’uld the Curia are working with, demands that Chancellor Travell send one of the weapons to Earth as a demonstration. Daniel Jackson calls her out on her mistaken rationalization that the Tollan themselves are not killing anyone. Travell was not expecting to have to actually pull the trigger.

Travell says that she had no choice, but Sam doesn’t let her off the hook — responding with a simple and forceful, “Yes. You did.” Sam’s body language and the expression on her face clearly delivers the unspoken “and you know it” – a perfect mirror to the moment between O’Neill and Narim just moments before. 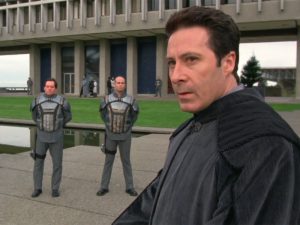 Narim (Garwin Sanford) must move carefully after he begins to suspect his government.

But things are never so cut-and-dried for those caught up in the middle of conflict. Narim is shocked and appalled every time he learns of a new betrayal of trust by his government, and struggles to know how to respond. Afraid that he might be committing treason, he gets upset when SG-1 first asks for his help in figuring out what is going on. And when Narim finally confronts Travell about her choices, she challenges him with the assertion that he would not find it so easy were he in her shoes.

This is the moment he thinks of when O’Neill and Teal’c ask him to destroy the weapons. This is what Narim has to overcome. Though he knows he could be dooming his planet and everyone on it, his high ethical convictions lead him to make the choice that will save many other worlds — and restore the Tollans’ honor.

He not only sets in stone his conviction that what the Curia has done is wrong, but takes the next, much more difficult step: taking action to set it right.

Stargate SG-1 always knew that some things are more important than survival, and “Between Two Fires” is a beautiful example of that ethic. Yes, Tollana is destroyed. But Narim faces his fate bravely. He takes responsibility for what he has done, and for what his government has done. In the SG-1 story world, as in life, doing the right thing doesn’t always mean coming out ahead — but it does mean ending well. The series asserts again and again that, in the end, that is far more important. 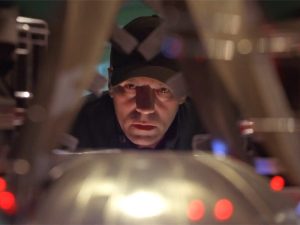 It’s a wonderful depiction of the reality of tough choices, moral courage, honor, and sacrificial love. And the show is all the more nuanced for the writer’s refusal to depict Travell as a villain. Although she and the other members of the Curia have chosen to work with the Goa’uld, they have done so for the preservation of their people, not for personal gain.

The Goa’uld is the clear villain in this story. Travell is the ordinary person who made a difficult but finally dishonorable choice in response to a threat.

Her mirror image is found in Narim, who struggles with his part in the whole mess right up until the moment he decides to destroy the weapons. His courage is an equally human counterpart to Travell’s fallibility: in the end, Narim is the hero who makes the hard choice for the right reasons and accepts the consequences, come what may.

Narim’s choice is especially poignant because we don’t know for certain that SG-1 — the “good guys” who challenged him to act according to an ethical standard, at the likely expense of his people — actually would have done the same in his shoes.

After all, every time they have been presented with an alternate reality, our team choose their own world as the most important (“Point of View,” “Ripple Effect”). Faced with the death of Cassandra, they made a deal with Nirrti that resulted in her continued freedom to wreak havoc on the rest of the galaxy (“Rite of Passage”).

And their desire to return home in Season Two’s “Prisoners” caused them to accept Linea’s help and get her out … without even trying to see if she was imprisoned for a reason. (That unquestioning trust resulted in significant damage to another planet in the third season episode “Past and Present.”)

WHAT WOULD YOU DO? 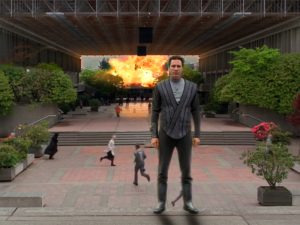 Narim takes actions that commit his people to a losing battle.

We’d like to think that the team would do what they must to prevent the destruction of many worlds. And we’d probably take it for granted that they would find some way to save themselves while they were at it. But what would they really do in a case of immanent self-preservation?

It’s a question “Between Two Fires” invites us to consider as viewers: What would we do in the same situation? Although none of us are likely to be presented with an ethical dilemma on quite this scale, we have, throughout history, faced such dilemmas at other levels. Perhaps the most obvious example is Nazi Germany. It is easy as outside, future observers to look back and “know” what we would do were we living in such an environment. But, as we see with Narim’s struggle and Chancellor Travell’s decision, it is not so easy in the moment.

That is why so many ordinary Germans chose to look the other way — and why we are so inspired by the stories of those who risked, and in many cases lost, their lives attempting to protect their neighbors.

And so when we look at world history, and when we watch shows like Stargate, we are reminded that these decisions are not always as easy as we think they will be — even if we know what the right thing to do is. This makes a careful consideration of the question “What would you do?” all the more important.

How far would you go to protect yourself, or your family? What would you be willing to rationalize in the name of safety?

Read Next:Stargate Ethics: Crossing The Line In ‘The Other Side’

Rachel Lulich is a writer, freelance editor, and Air Force Veteran. She discovered Stargate in college and has loved science fiction ever since. Her first novel, Random Walk, is a hard sci-fi space adventure.

Rachel is an excellent writer and writes what she see’s is true and morally correct!!!!

Wow this was a really good read! Have to go back and watch that show again.

David A Morse
Reply to  mellowmia

I just began rewatching the series and saw it. It’s a wonderful morality tale. We don’t need to look back at Nazi Germany though, we merely have to watch our USA nightly news.