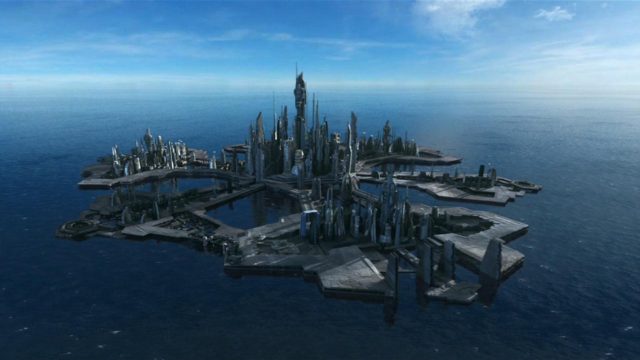 For those who wonder what the cancelled Stargate Atlantis movie might have looked like, we now have a better idea.

Over the last few days long-time Stargate producer Joseph Mallozzi has uploaded several pages of the Stargate: Extinction screenplay to his blog. He has also posted other behind-the-scenes content from his time on SGA, SGU, and Dark Matter.

Mallozzi joined the Stargate SG-1 writing team in 2000, and with Paul Mullie was an executive producer and day-to-day showrunner for the final two seasons of Stargate Atlantis. The series went off the air in 2009.

Stargate: Extinction was originally announced as the first of several planned Stargate Atlantis direct-to-DVD movies that would continue the Atlantis story after its cancellation. Mallozzi and Mullie wrote the script, and Stargate veteran Andy Mikita was slated to direct.

But despite repeated guarantees that the film was a high priority, economic hardships and a declining DVD market caused MGM to permanently shelve the project — and its SG-1 counterpart, Stargate: Revolution — back in 2011.

With these newly declassified pages Mallozzi has breathed new excitement into fandom over the ill-fated project.

Today the page count of public material stands at four, with more potentially on the way. But there is already plenty to analyze and discuss. So let’s dive in. 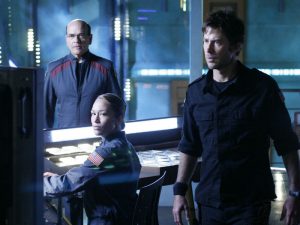 The first page comes from a scene that takes place on Earth, with two major beats that go hand in hand. One is between Colonel John Sheppard and Major Paul Davis (played by Colin Cunningham). Major Davis warns Sheppard that he may be unauthorized to carry out an unspecified action.

Colonel Sheppard says not to worry, as “General O’Neill’s got my back.”

The second beat immediately clarifies what is going on here: Sheppard is going to visit Todd the Wraith, who is now being held in custody at Area 51 on Earth. Sheppard comes to seek Todd’s help on a return trip to the Pegasus Galaxy.

Todd teases him: “What, and leave all this? I suppose I could be persuaded.”

The page then ends with an establishing shot of the city of Atlantis on the surface of the Moon. That this would be the city’s new (temporary) home Mallozzi revealed to fans some years ago. This allows the city to be utilized by Homeworld Command as a nearby base of operations, yet while keeping it out of the view of the general public. 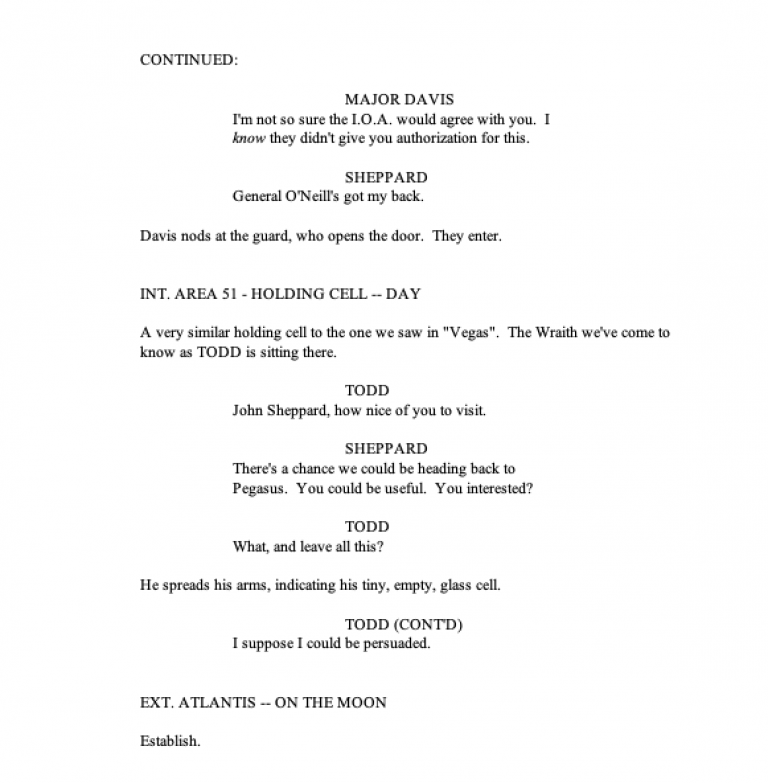 The second page has a bit more to offer in the form of plot details, diving headfirst into a technobabble exchange between Dr. Rodney McKay and a new character, a scientist named Kara.

It appears that the two are working together inside a power relay station, and are discussing a mechanism by which power can be collected from the matter exchange between a white dwarf and the system’s primary star. The setting implies that, by this point in the story, Atlantis has left Earth’s solar system and is somewhere en route back to Pegasus.

Mallozzi also noted in his blog post that he “loved the opportunity to tackle far-out yet theoretically sound sci-fi concepts” in Stargate, and was excited to explore a new phenomenon in Extinction.

Here, that appears to be one species’ use of advanced technology to collect usable power from its stars. 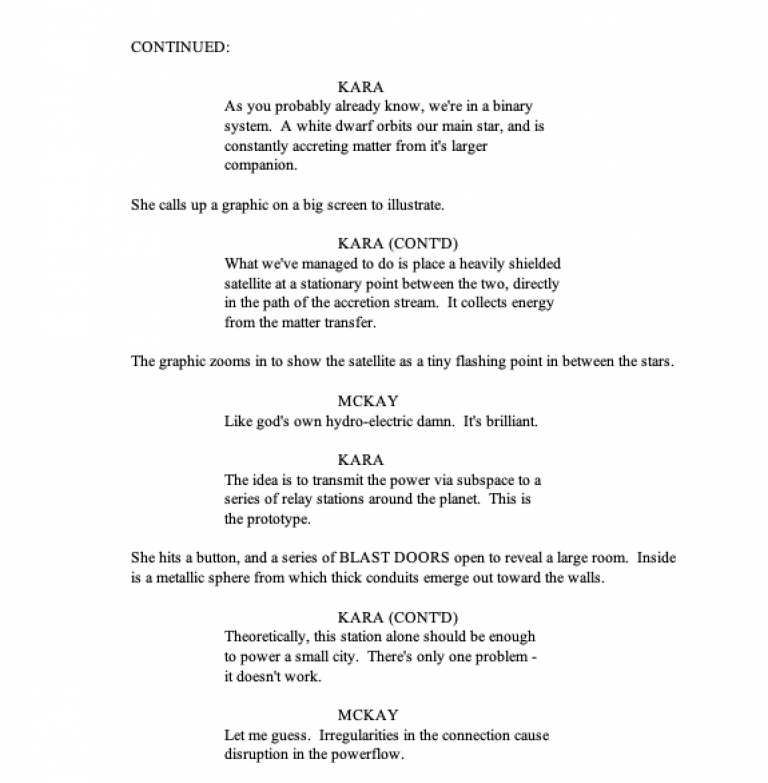 The third page released this week depicts an action sequence in space, with Sheppard taking fire in a Puddle Jumper. Meanwhile Woolsey and Zelenka monitoring the situation from the Atlantis control room.

While this page is also light on context — with the light-craft attack force remaining shrouded in mystery — the snappy dialogue and kinetic action are enough to paint a vivid picture familiar to fans of the television show. 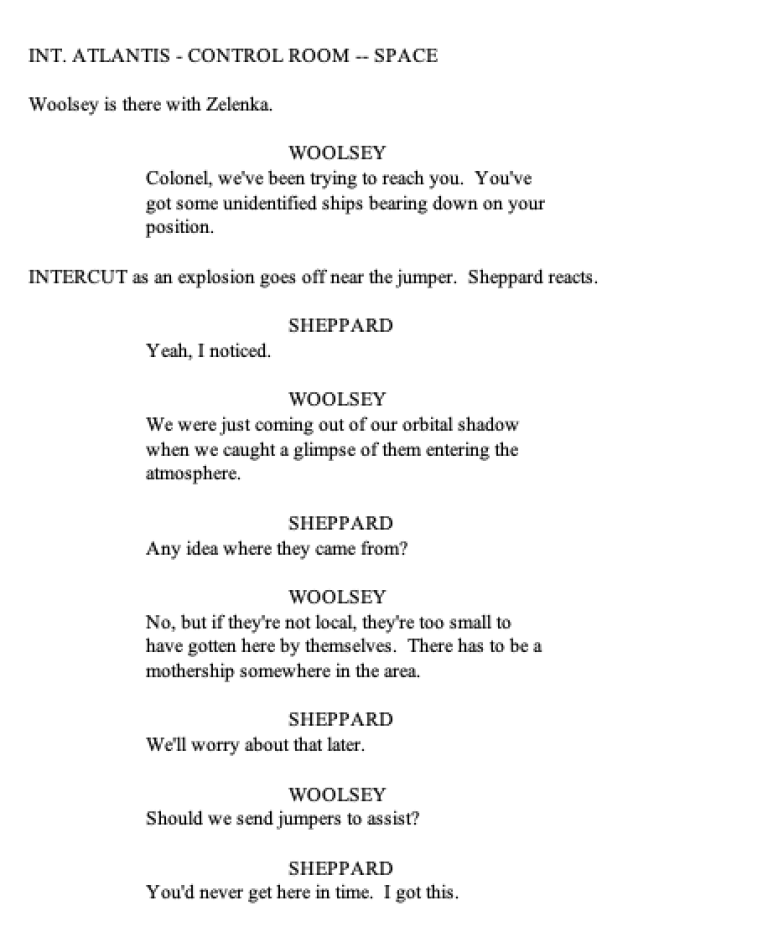 Finally, there is a fourth page that introduces a Future Todd — who appears to be gifting our heroes with a way to avoid the destruction of the great city. 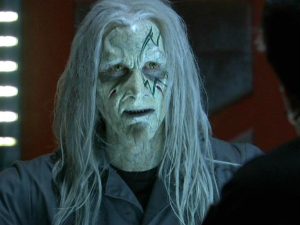 Todd (Christopher Heyerdahl) was still in custody inside Atlantis when the ship traveled to Earth. From “Enemy At the Gate”

Now whether Atlantis was destroyed earlier in Extinction (our timeline) or whether Future Todd is simply trying to avoid that scenario based off his own experience … well, that can’t be determined based on what we have seen so far. These pages are just scattershot glimpses of the script. (We don’t even know if the pages are sequential.)

But the unveiling of such a scenario (time traveling Wraith and the destruction of Atlantis) certainly ups the stakes, and provides us with a deeper glimpse into the plot mechanics of the film. Clearly there is much more at stake in the story than simply flying the city home and picking up the ongoing fight against the Wraith. 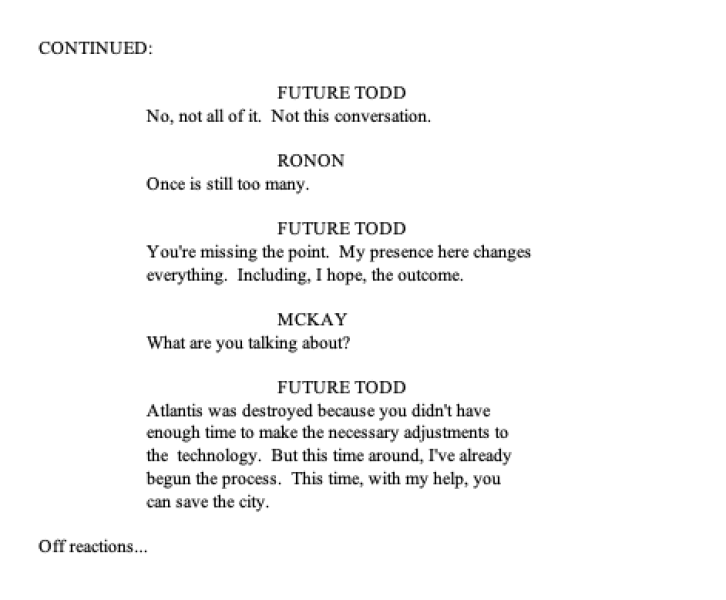 While these pages provide an undeniably exciting look inside the Atlantis adventure that never was, Mallozzi previously revealed fairly extensive plot details on Stargate: Extinction back in 2013 — after it became clear the production was dead.

According to his summaries the movie was going to pick up not long after the Stargate Atlantis finale “Enemy at the Gate”. That episode saw the Ancient city coming to rest in San Francisco Bay after a battle with a Wraith hive ship high in Earth’s orbit.

While Atlantis has been successfully relocated to the Moon, early on in the story the city’s self-destruct mechanism is activated. The team quickly discerns that the only way to deactivate it is to return to the Pegasus Galaxy. 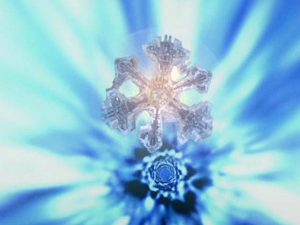 Atlantis would have returned to interstellar space in Stargate: Extinction. From “Enemy At the Gate”

Our heroes scramble together a plan to use the wormhole drive to return Atlantis to its distant home, but the drive burns out mid-journey.

Atlantis is now stranded in the Triangulum Galaxy — a whopping 300,000 light years from home.

Per his blog post, what follows is “a high-flying adventure involving a mysterious civilization tapping the limitless potential of the accretion streams between two stars, time travel, and a race against time to avert not only the destruction of Atlantis but the extinction of an entire race.”

These four script pages certainly look to pay off each of those things.

While Stargate fans would certainly appreciate more story spoilers or script pages (if not the whole PDF document), these small glimpses provide some much-needed insight into where producers intended the story to go.

In response to calls for the full script, Mallozzi noted on social media that the Extinction script belongs to MGM — and any decision to make it available to fans, or adapt it in another medium, rests with the studio.

While we wait for more, head over to GateWorld’s Stargate: Extinction page to learn more about the unproduced Atlantis film — ranging from production information to additional plot details.

And special thanks to Joseph Mallozzi for sharing this rare glimpse into Stargate’s history! View the original posts on his blog.

Sorry to burst your bubble, but Atlantis seasons 4 and 5 were by far the show’s worst. Cast changes, a new darker direction, pointless storylines, the Wraith being reduced to the level of pantomime villains. Let’s not even think about the “that would NEVER happen” romance between McKay and the blonde doctor (because why have funny, honest, heroic Ronan when you can have “nice guy” McKay, the whiny, nasty, sarcastic coward?). McKay became almost unbearable and the storylines just got stupid. All the good things about seasons 1 to 3 were ejected.

It was the same thing with SG-1. SG-1 got better with each season up until season 8. Season 9 and 10 went down hill mainly because Jack left and Vala sucked.

Happens with so many good shows.

Let’s just say it’s your opinion. Don’t act as it would be the consensus of the fandom.

I really disagree Stargate Atlantis was evolving in a really nice way. I think it was at its peak during season 5 and I was so excited for a season 6.

Contrary, I strongly believe that the last seasons 4 & 5 was the best of sGA !

On the contrary seasons 4 and 5 introduced an immense wealth of material, the number of interesting storylines that were opened up were some of the most exciting for Stargate overall. In particular to take our biggest and most powerful ally the Asguard and having an evil version of them was so darned exciting and scary – seasons worth of storyline there alone. Those Borg type creates, the replicators, the Travellers, the Genni treaty, the working relationship with the Wraith Todd, not to mention we still had a whole CITY to explore… it really made the Wraith themselves quite irrelevant… Read more »

I really wish they would just publish the whole screenplay online, even if it was only behind the paywall on Stargate Command

Why do you want to deny fans from 189 countries the chance of reading these pages? You do realize that paywall is only open to 6 countries, right?

Some fan you are, denying the entire community access. You fit right in with the MGM/Command lot.

Sure wish the movie had been made.

I don’t like the reason for Atlantis having to return. Self destruct because it’s out of Pegasus is a lazy reason. Give us something better….
Like an imminent Wraith or Pegasus Asgard attack threat, and a need to return with force to wipe out the threat, and free all the humans in Pegasus stuck in this cycle of being fed upon / destroyed

In the novels that were commissioned O’Neill claimed Atlantis for the united states in a bid to make the IOA freak out and force them to send it back to Pegasus rather than deal with the political repercussions of it ending up under the control of any one nation.

Like all other Studios MGM have a duty of care when they AXE a show without an conclusion is to provide fans with a story conclusion and ending in a form of a tv series or movie.

I think they should just novelize the script, like Sally Malcolm wrote the novelization of Rising, so everyone has a chance to buy the novel (digital or paperback, or audio if you’re into that sort of thing), and read it at their own leisure.

My question is even more basic: why is he “revealing” these pages?

Because he’s sad it wasn’t made

There’s the comics too following the script or continuing things on at least.