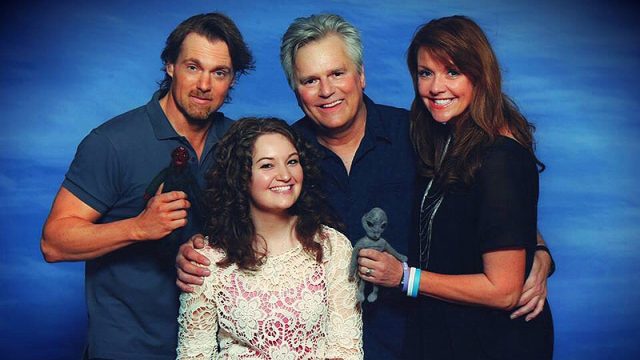 Every day this week we are counting down to the 25th anniversary of Stargate (1994), with “Finding Fandom.” Today Jacqueline steps into the convention world, where fans can experience Stargate fandom on the ground.

This series has already looked at various areas of the Stargate fandom – from the fans’ appreciation of the series itself to sharing their talents through skills such as making replica props or creating artwork. But there is another area that plays a huge role in the lives of some fans.

If having no sleep for 72 hours, consuming various takeaway meals, and holding in-depth conversations about television shows at 2 a.m. in the middle of a hotel lobby with a Stormtrooper, Spider-Man, and a Stargate cosplayer sounds familiar … then it’s safe to say you have experienced the convention circuit. 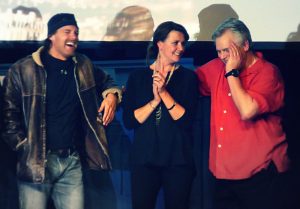 The first event I attended was actually an in-store signing with Michael Shanks and Christopher Judge in the early 2000s. I was so excited – and shocked – that they were coming to my home city. This was an event I was not going to miss … so I may or may not have skipped school that day. (I think it’s OK to admit that now?!)

I was nervous as I waited to meet two of my television heroes — but I also remember the conversations I had with other fans in the queue. There were debates as to the best character, or the funniest scene. The day was incredibly special. It left me hooked and shortly afterwards I started attending more in-store signings, with conventions then following.

There was something about the experience – an experience I didn’t even know existed until that point – that I loved. I can’t put my finger on exactly what it was, but it wasn’t just because I finally had the opportunity to meet one half of SG-1. There was an atmosphere, a buzz in the air that was shared by all of those attending that brought us together. Our love of the show gave us common ground, opening up a myriad of conversations and striking up friendships.

Most of us are familiar with the big events like London Film and Comic-Con, San Diego Comic-Con, and FedCon. There’s also Gatecon and Cal Mah, and guest-specific cons such as “Meet The Man” or GABIT. But whatever the event, wherever it is being held, it’s a chance to come together and share our love for the shows. Young and old, male and female, long-time fans and those newer to the franchise — conventions are open to all.

“Conventions are like annual pilgrimages to some people,” MissRainbowPie said. That’s as accurate a description as I’ve ever heard. But there’s also that old saying that you should never meet your heroes. Yet this genuinely is not the case for Stargate. 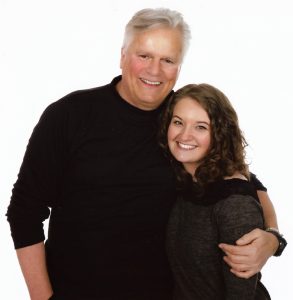 RDA has been one of my favorite guests to meet.

The cast and crew are among the nicest people I’ve ever had the fortune of meeting over the years – an opinion shared by a significant number of fans I spoke to.

clairec007 is a familiar face to many fans and a regular on the convention circuit. “I’ve attended all the Chevron [UK-based] cons, plus three cons overseas and two Gatecon events in the UK,” she said. “The main reasons I go are for the guests, but I love meeting up with fellow attendees, some of which have become good friends. I crew most of the conventions that I attend and have had the pleasure to GA several of the actors.”

“I started going to conventions in 2008,” bluewaterishome said of their own experiences. “It was Gatecon in Vancouver (where Richard Dean Anderson was a guest), and this summer I attended my 27th convention. I attend them for many reasons. I love hanging out with other Stargate fans and meeting the Stargate cast and crew. It’s also allowed me an excuse to see more of the world and meet folks from so many countries. The farthest I have traveled to for a convention has been Sydney, Australia.”

LetitiaTHELemon is also a keen convention-goer: “I’ve been to over 40 conventions in eight years, all for various things – general comic cons, gaming conventions and specific show- / film-related events. I mostly go to conventions for the guests, if there are particular people that I want to meet.”

“I attend way too many cons,” laughed AngieVonAsgard. “I mainly go to see my favorite actors and to hang out with my friends. I absolutely love conventions and the excitement in the air.”

“We go for the actors and for the friends we’ve made,” Twinsyl said. “We have attended events but we have also organized some small conventions. In the first we had Alexis Cruz [“Skaara”], and Peter Williams [“Apophis”] in the second. Both were charming guests. They were great!” 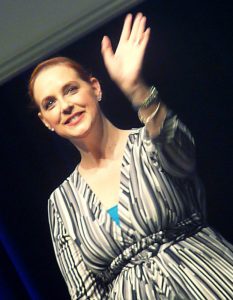 Suanne Braun (“Hathor”) has spoken of her appreciation of the fans. Photo: Jacqueline Purse

The guest stars have fun, too. But when asked what they love about conventions, many fans will admit that it is seeing their fellow fans and the friendships those fans have forged. It’s a really special relationship.

real_sgafan said: “Conventions started as part of my love of the show, and my first Stargate conventions were in Vancouver when they still were filming. Everyone was in town and would just “show up”; the sets were there and we were able to tour them. But what happened unexpectedly was the friendships. We all went to VanCon together and over a decade later, a small group of us met, once again, at Chicago Con this last June. We are lifelong friends, have gotten together outside of conventions and stay in touch.

“Without the fandom and the conventions, we would’ve never met. We are literally from all over the U.S. So, while at this point, many of the guests at conventions recognize us by name and are always a joy to see and talk to, we love getting together as friends just as much, or even more.”

XFchemist said much the same thing: “It gives me the opportunity to get together with friends I’ve met [because of the show]. Conventions let me be me, the real me, for a weekend with no risk of getting mocked or judged for what I love. I can sit on the floor of a hotel lobby and talk for hours about fictional characters, and nobody thinks I am weird.”

“There’s just something fun about meeting people from all walks of life who may or may not have anything in common with one another except one thing; their love for these characters and their story,” BeaJmut537 said. “My main purpose [at cons] is to connect with people who have the same interest than me,” carterisawesome added. “It’s always a blast to see Stargate cosplay and to just chat and hang out.” 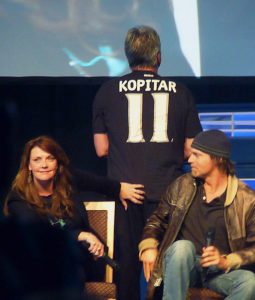 “I attend pop culture conventions two times a year,” said Sara Kehoe, “and at least one of the days I attend, I’ll wear my SG cosplay. I’ve gotten into a lot of great conversations with fans when they see my gear. One day I hope to attend a Stargate-specific convention, although I did get to meet Richard Dean Anderson when he came to my local convention.”

Going to cons can be an expensive hobby, and the location of a particular event can also be a deciding factor on whether or not a fan is able to attend. Other times, it might be that a fan just hasn’t had the opportunity to go to an event before – or they’ve only recently discovered they exist.

JACQSTER65, for example, recently attended their second convention and loved it: “I enjoy meeting the cast as well as other fans. It’s great to see everyone dress up and I’m impressed by how creative people are with their cosplay. Everyone is so friendly and welcoming; it really is a family.”

There are others, including stacypa42041454, who just last year got to attend their first convention: “I got to meet Richard Dean Anderson, Joe Flanigan, and Jason Momoa and I really enjoyed meeting them. I got to sit in on some panels which was a lot of fun, and met other Stargate fans. Everyone was friendly and we had some great conversations. I also enjoyed seeing the cosplayers; some of their costumes were fantastic.”

As fun as conventions can be, they also mean much more to some fans. Sometimes, the opportunity can change — or save — a life.

“My first convention was Amanda Tapping’s AT7 convention in London,” 4thWall_Kat shared. “I was caught up in a major depression and nothing had got me remotely interested in life for years and years before I came across her and her work.

“I had severe social anxiety at that point, so I never really left the house much, let alone to spend the weekend in a foreign country with 200 complete strangers. But I did. And it has since changed everything for me.” 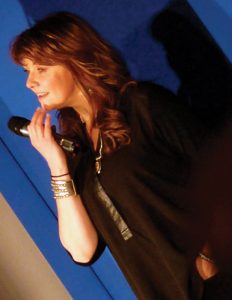 Amanda meets her fans at AT7, hosted by GABIT — a fan-run U.K. event that stands for “Get Amanda Back In Town!” Photo: Jacqueline Purse

MamaNoxErika also went through incredibly traumatic circumstances, which she admits left her “a hermit for 18 long years.” But the discovery of Stargate and the gift of convention tickets from family members opened up an entirely new world.

“In 2014, my family clubbed together and bought me the most weird and wonderful birthday present: tickets to a convention. It was something on my bucket list, but then I started panicking about how I was going to get there as I could not travel out of my own city at all. Only then I realized, that it wasn’t even in my home country – it was in Germany.

“My daughter said it would prove how much I love Stargate … and for the love of Stargate, I did it. But after the convention I needed more, and the following year I attended my second event. Even though I still have major problems travelling, I now use conventions as my therapy to stop me from ever being a hermit again.”

There are occasions when it feels like conventions are given a bad rap. But I’ve only ever had positive experiences. And as I chatted to others about their adventures, I was honored to listen as they confided in me and shared their stories, revealing how these gatherings go beyond meeting their favorite celebrity.

The next article in this series looks further into the family behind the fandom, and just how far Stargate’s reach goes beyond the storylines on the screen. 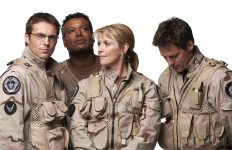 Finding Fandom: The Return of Stargate?→ 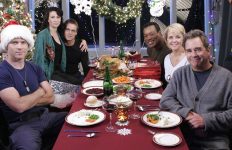 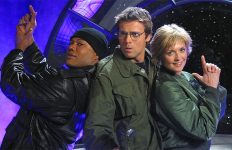 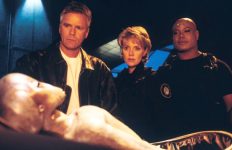 Finding Fandom: Stargate And Its Themes→

Again, well done! Informative with a glimpse into a world I didn’t know existed. I love the human touch your article portrayed. It is amazing how the love of a iconic TV show can bring so many people together for fun and most importantly to Bond and heal each other! Thank you Ms. Purse!