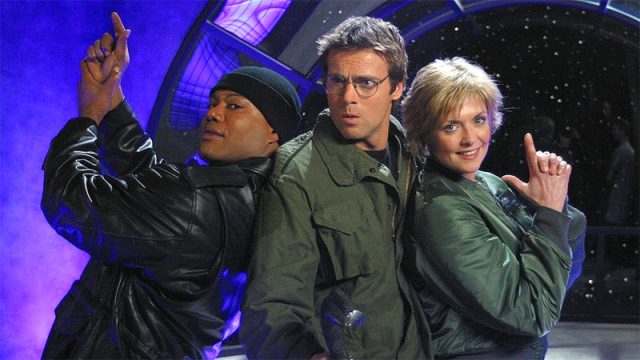 Every day this week we are counting down to the 25th anniversary of Stargate (1994), with “Finding Fandom.” Today Jacqueline talks with fans about creating fan fiction, art, and more.

When a show is off-air, quite often it’s the fans who keep its legacy alive. The cast and crew might still be found reminiscing every once in a while, as they share memories from their time on the set — but it is the fans’ dedication that helps tell the stories when a series has finished.

Within the Stargate fandom, there is a wealth of talent to be found. And these fans play a vital role in keeping the show and its characters alive and active for others. They willingly share their talent and vision and whether it’s through art, writing, costumes or replica props … you name it, and more than likely someone out there has created it (or knows someone who has).

IF YOU BUILD IT …

Sharing this joy of the show comes in many forms, large and small. Let’s start with the large: earlier this year the fan group Les Enfants de Mac Gyver (EMG), or the “Children of MacGyver,” unveiled a 1:1-scale, screen-accurate reproduction of the Pegasus Galaxy Stargate which featured on Stargate Atlantis‘s five-year run. 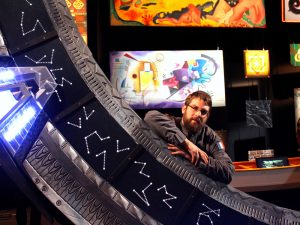 Using a segment of the show’s original prop (cut into segments and sold at auction) to help with the design of the gate, this project was 10 years in the making. And it’s not just a framework; the gate – with a diameter of almost 20 feet – featured a working light track to illuminate the glyphs and chevrons. The team also rigged an Atlantis-style dialing device, with sound effects, to conduct a dialing sequence. If that’s not dedication, I don’t know what is!

But scaling down, there are fans who have made their own custom Funko Pop-style models or action figures for Stargate characters. Others have made replica badges or costumes for cosplayers.

Then there are those who have created art of another sort – by establishing their own podcasts. I listen to a number of Stargate-focused podcasts including the GateWorld Podcast, Walking Through The Stargate, and Chevrons Locked. There are others I’d also high recommend, and all available on various platforms.

But even though they all center around the show, it is interesting to see the different angles each venture takes — whether it is the core content, or their thoughts on an episode or character, etc. This vast array of opinions and fan-created content enables us to keep discovering something new about Stargate, or something we never really thought about before.

While this outlet for fans is ever growing in popularity, there is one aspect of fan-created content that still seems to dominate. And it’s thanks to those who share their talent through art, videos, and fan fiction.

Fan fiction has long been bit of a “grey area” because of copyright and legal issues. However, most will confirm that it’s not an opportunity to “cash in” on someone else’s world. Fellow fan Kirstynumbers explains: “I love fanfic and fanart – it’s a genuine labor of love. It’s not for profit. It’s not to ‘rip off’ someone else’s ideas. It’s done because people genuinely love the material and want more of it. It’s [also] fun to play with characters someone else has created, but you’ve found an affection for.” 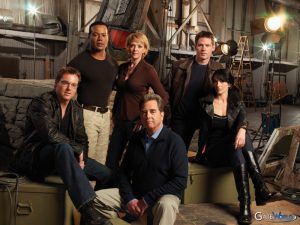 Fanfic allows fans to continue their favorite characters’ stories, even after an episode — or the show itself — fades to black.

“The time and effort people put into their stories is incredible, all for little or no recognition,” BeverleyJeffre2 added.

There was a time when the general consensus seemed to be that fanfic was written by shy, awkward teenage girls, and the content was usually either immature or pornographic in nature. In recent times, however, these vastly incorrect assumptions haven’t been as readily voiced by critics. Opinions regarding fanfic have slowly changed toward the positive. Fanfic has become more mainstream, embraced by a wider demographic, and more widely spoken about.

One outlet that has helped to challenge these perceptions is AO3. “Archive of Our Own” is, by its own definition, “a fan-created, fan-run, non-profit, non-commercial archive for transformative fanworks, like fanfiction, fanart, fan videos, and podfic.” With over two million users it is a huge archive, and the site made waves earlier this year when it won the 2019 Hugo Award in the “Best Related Work” category.

It has helped to reveal the popularity of fan fiction, and to acknowledge the unsung talent of those who freely give of their time and ideas for others.

“Fanfic is honestly some of the best writing I’ve ever read,” Kirstynumbers said, “and I’m a fairly prolific reader in general. I’m so happy that fic seems to be far more accepted now and is finally being recognised for the spirit it’s usually written in.” 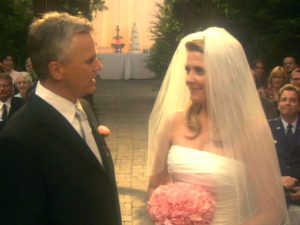 One thing fanfic does is allow viewers to explore those scenarios that never played out on screen. From “200”

Fanfic (and other forms of fan-created works) proved incredibly popular with a number of fans I spoke to. Some of them create these works, and others simply enjoy them.

“There’s just something about certain shows that has a ‘fandom’ quality to it,” xbleeple told me. “And I wish it was something that could be pinpointed, but Stargate definitely has that quality. I was very surprised to find not only an active but a welcoming community as I started poking around for it on Tumblr and FFN, and then AO3.”

“I enjoy the writing of so many others as it expands the show, and I think it’s been part of what’s kept the fandom alive all these years,” sg1on added.

So, just what drives people to create their own works based on this particular franchise?

“I love exploring new sides of my favorite characters,” fems admitted. “Expanding on the show’s world-building and, of course, getting resolution for my favorite ship [Sam and Jack], and the interaction with readers and other fanfic writers is just awesome.”

Popkin16 added: “I wanted to explore the relationships between the characters more. They seem so close on the show, but we never get to see those quiet moments.” 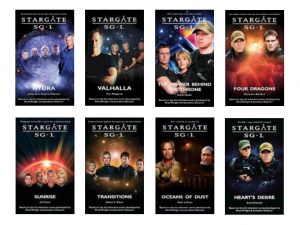 A selection of official Stargate novels from Fandemonium

jengenexer agreed that “there are so many stories to be told and I think the show really fuels the imagination like no other. In fanfic, authors have a way of continuing the story, or deepening it, and I like that. There were a lot of stories told on-screen but I have always felt there were so many more.”

Previously, it used to be that if a fan developed user-generated content in homage to a show, they would be issued with a take-down notice. Now, fans can be seen as creators. This isn’t to say that everyone who writes fanfic is able to claim they created part of the show and therefore own rights to it, of course. But there are some who have made the jump from fan fiction to more official outlets.

Sally Malcolm, for example, started out as a fanfic writer and before going on to launch Fandemonium, the U.K.-based publisher of Stargate’s officially licensed novels. There she has also written several of her own, MGM-approved titles.

And it was fanfic that led BeaJmut537 to discover these novels existed: “I actually never really read much fan fiction at all until this year, and only recently discovered there are books out there! I love to write and find it fascinating and fun to read what other fans write.”

While many enjoy putting their favorite characters into new situations and sharing their own interpretation of episodes, for others the use of art and media is simply a creative outlet. real_sgafan said: “Getting involved is like a switch, and I’ve never been able to identify exactly what flips it. The best I’ve been able to determine is that there’s a deeper level of connection to shows we ‘fandom.’ You relate to something; a character, the story, the themes, at some deeper level than with other shows you enjoy. 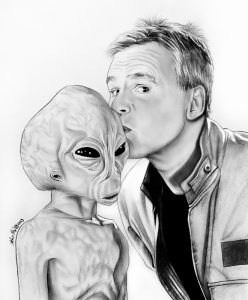 “I don’t think the connection is the same every time or the same for every person, but there is something more than normal that pulls you to it.”

“I’ve drawn for many franchises and fandoms but my love for Stargate was re-kindled by my best friend, and I wanted to share the love with others,” Steffi Hochriegl (Larkistin89) revealed. She was featured on GateWorld earlier this year. “It’s my way of giving something back to the people I admire and who work so hard to give so many of us joy every day; but it’s also my way of dealing with emotions. I’m highly empathic and sensitive, so all of these feelings need to get out. Art is my way of doing that and expressing just how much a show / character / actor means to me.”

Another reason Steffi shares her art is to bring inspiration to others. “Many fans have watched a show or movie simply because I made art for it,” she continued. “Others have taken drawings of mine to court dates or meetings for good luck. Others have told me they started drawing again because of my art. And if there’s just one person I can make happy with what I do, then it’s worth it.”

“I used to create a ton of fanart,” AngieVonAsgard told me. “Everything from GIF sets to manips to more traditional fan art. I’ve always loved Photoshop, so it was a natural progression of being in the fandom.”

samismymuse is another fan who has built up a strong following with their talents for creating GIFs and fan art. “I saw how others made great fan art and I wanted to give it a try,” samismymuse confessed. “I love it because I get lost in time when I work on a wallpaper, and it’s wonderful to share afterwards.” 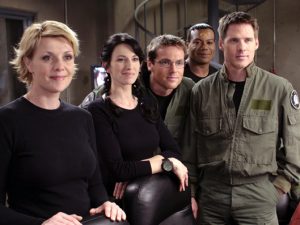 Fans are fueling the show’s legacy with their own creative talents — now more than a decade after SG-1 ended.

“It’s always nice to see different styles people can do [with regards to artwork] and as a freelance graphic designer I can appreciate that,” dana_cz said. “I like pretty things, and I try to create them. With fan videos I like to put fitting songs to characters, relationships, episodes, etc. And I like to see what others can do.”

For MissRainbowPie, editing fan videos is a special gift and something she has been doing for almost nine years now: “I wanted to be a vidder [not just for Stargate], but it’s my favorite show and the one I know the best, so it was the obvious place to start,” she said. “I love editing Stargate because I feel like I’m helping to keep the fandom alive.”

And helping to keep the fandom alive is what it’s ultimately all about. From a personal perspective, it is amazing that these avenues are available for fans to freely dive into their creativity and develop their own skills doing something they love. From a collective perspective, it is part of the reason why Stargate’s fan base is still so active – and why, for some, it feels like we’re still getting new content 20 years later.