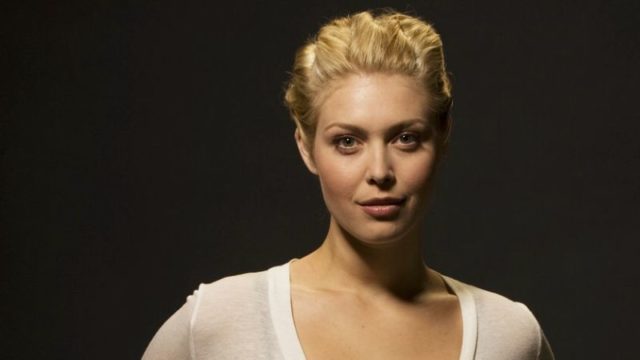 The story of “Sentinels” may sound familiar — an Earth fleet battling alien invaders, feuding political factions, and heroes with a dark past. But creator Mike Disa and the cast of the new audio drama want to tackle this story and the issues it deals with in deeper and more nuanced way than is often seen on television.

In a new behind-the-scenes interview, actress Alaina Huffman talks with Disa about “Sentinels: Point of No Return” and its approach to racism — and how the science fiction story reflects the reality of her own life experiences. She speaks candidly about dating and being married to a black man, seeing racial profiling in action, and having four black children growing up in suburban America.

Huffman played Lt. Tamara Johansen for two years on Stargate Universe. She was recruited into “Sentinels” by co-producer (and co-star) Christopher Judge, who played Teal’c on Stargate SG-1. 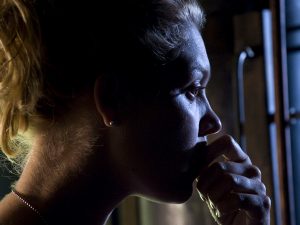 The interview will be posted next week on the “Sentinels” YouTube channel — but we have it for you to watch early!

“It’s nice to put your heart into something, and to be creative and fulfilled,” Huffman said. “I love the idea of it. I love the opportunity we have as artists to tell stories, particularly in genre mediums, where we can explore what we as humanity do to each other. And we can remove our fragility from it, so we can actually tell the story and convey it in a manner that people get. This story is riddled with power struggles, and phobia and bigotry.”

That includes Huffman’s own character: Admiral Katherine Shepard, supreme commander of EarthGuard’s interstellar military fleet. When Earth’s solar system is invaded by a ruthless alien foe, she must rally her people to repel the invaders … and also rescue one of her own.

But the invasion also puts new pressures on the military fleet. The Genen are a race of people genetically enhanced centuries before to allow humankind to spread out to other parts of the solar system, and over generations they have become victims of widespread prejudice. Now in a last ditch attempt to rebuild her decimated security forces, Admiral Shepard must integrate her traditionally “pure-gene” fighting forces — though she too is bigoted against the Genen officers now serving under her command.

Disa said that he wants to tackle racism not only from one side — such as the triumph of a sympathetic, oppressed character (alluding to Data in an episode of television such as Star Trek: The Next Generation‘s “The Measure of a Man”). Instead he intends to show both sides of racial strife and the struggle over integration, and the damage that racism does to both the oppressed and the oppressor, as fully fleshed-out characters in the “Sentinels” story (which is inspired in part by the integration of the Chicago police force in the 1960s and 70s). 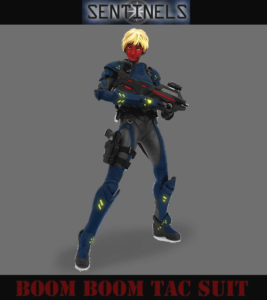 Huffman embraced the challenge of what “Sentinels” is trying to do … even though it gave her some difficult dialogue to speak aloud.

“I actually quite enjoy playing characters like that, because they are relatable,” she said. “I think we all have elements of ourselves that are faulted. … If you read anything from Frederick Douglass, or Booker T. Washington, they can remove the system of slavery or a system of oppression from individuals — because the individuals on either side of it are victims. We’re all victims of the oppressiveness of it.

“And so for someone like my character you can understand: she can confirm every time she turns around [that she has] this ideal. Her mission is to save this ‘higher class’ of people. So every time she turns around she’s seeing something that is standing in the way. And if that’s always represented by ‘the other’ then the other is [perceived as] the problem — when in reality the f—ing system is the problem.”

Be sure to watch the full, 28-minute interview below. (Thanks to Mike and Alaina for sharing it with GateWorld a little early!) For more conversations like this one subscribe to the “Sentinels” YouTube channel.

“Sentinels: Point of No Return” is currently being released as a 12-part podcast. It was adapted from Disa’s script for a television pilot. Learn more about the project here, and to support the indie project look for the audio drama itself on iTunes, Podbean, or wherever you find your podcasts.

Meanwhile Huffman is also currently appearing in a recurring role on the post-apocalyptic drama The 100. The show’s final season is currently airing Wednesdays on The CW. 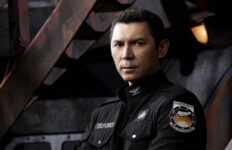 Darren, wonderfully well written article!!!! One small thing. I want to make it clear the series intends to show the damage both sides of racial strife endure and that any oppressor ultimately destroys the worthwhile parts of themselves in the oppression. They should still get their butts overthrown though!

Thank you for commenting, Mike! I’ve filled out the language in that paragraph a bit further.

This part of the conversation — that the humanity of the oppressor is in a sense also damaged by racism — really strikes a chord. James H. Cone, the father of modern Black Theology, makes the same point: to stand opposed to racism as sin is not merely to reject the racist as a sinner, but to recognize that he too stands in need of healing and restoration.

Also, the oppressor faces a variety of problems, like living in the horrible type of society they’ve created, maybe one day the oppressor will end up with a disability or life circumstance where they, themselves are oppressed by the society they created, and they finally see it from the other’s shoes, but it’s too late. Thank You for your article, and for your website, I am so glad I learned about Sentinel because of your article, it gives me hope for our society, knowing that there are still people who care about quality storytelling.

Mike: Thank You and everyone involved for providing our society with entertainment that teaches lessons, as that’s what storytelling is all about to begin with, but is often neglected due to greed and ignorance. That’s the main reason why I’m a Stargate fan, due to the variety of things the Stargate franchise represents, the morals, the history and math, and the crew’s dedication that gives an excellent example of what is important. And, thanks to Darren for this article, as I was not aware that Sentinels existed until now. I automatically know that any project Christopher Judge and Alaina Huffman… Read more »