The Stargate Roleplaying Game makes its global debut this weekend at Gen Con Online, and you’ll be able to tune in from the comfort of your own home. Following last weekend’s game streams at San Diego [email protected], publisher Wyvern Gaming will host a series of games open to players around the world, as well as three live-streaming events.

Wyvern will share three live broadcasts for the Stargate Roleplaying Game: 3-hour events to demo the game this Friday and Saturday mornings, and a special Q&A session with the game’s creators on Sunday. Here’s the schedule:

Saturday, August 1: Stargate RPG Gameplay Broadcast
Time: 9 a.m. ET (3 hours)
Location: YouTube Live (Wyvern Gaming)
If you miss Friday’s event, Brad Ellis is back with another play-through. Watch as a Gatemaster guides a team on another mission through the Stargate. 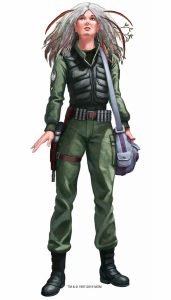 The character Kulera is an Aturen, a new species introduced in the RPG.

Sunday, August 2: Stargate RPG Q&A
Time: 11 a.m. ET (1 hour)
Location: Google Meet
Join the game developers from Wyvern Gaming and lead designer Mack Martin as they answer questions about the Stargate RPG. The team will answer your questions about how the game fits into Stargate canon, to game mechanic choices, and more.

More than 20 other events will give players at home a chance to sign up and play, with 4-hour sessions scheduled from Thursday through Sunday. These games carry a $4 (USD) registration fee for a limited number of spaces, which are now sold out.

Players will be able to participate in sessions playing through the first three episodes in the first season of the “Stargate: Phoenix” living RPG campaign. The storyline is set during the sixth season of Stargate SG-1, with teams based at Stargate Command’s “Phoenix Site” — an off-world base for humans and their allies to join forces against the Goa’uld.

The first three episodes are titled: “Groundbreaking,” “Sanctuary,” and “Twisted Past.” Additional episodes will be published over the coming year, leading to the reveal of the season finale at Gen Con 2021.

The game’s core rulebook will be published next year.

The Stargate RPG’s debut this week will be followed by a formal Kickstarter later in the year, and a 2021 planned publication of the core rulebook.

Gen Con takes place each summer, drawing tens of thousands of players to Indianapolis, Indiana. This year’s COVID-19 concerns pushed the convention to go entirely online, for the first time in its more than 50-year history.

Find the full schedule of Wyvern’s events at GenCon.com, and be sure to register for the event to show your support!

Sign up for more updates on the Stargate Roleplaying Game at StargateTheRPG.com.