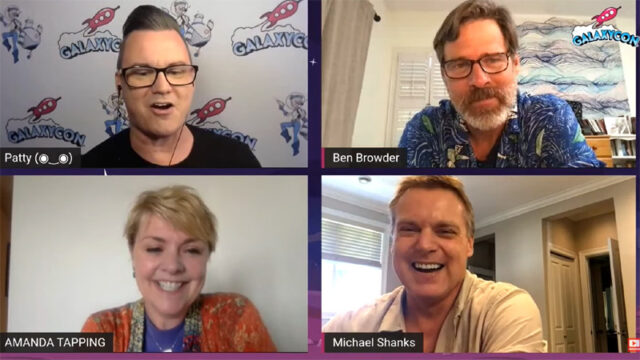 Three of Stargate’s finest are back together for a convention appearance, and thanks to the era of online conventions everyone around the world gets to watch and enjoy their conversation.

The trio talked about filming Stargate: Continuum in the Arctic, working with the U.S. Air Force, influences on their acting careers, and how fun it would be to work together on a theatre stage. They also shared their personal challenges in acting today, including auditioning through Zoom during the COVID pandemic.

They also recalled the food on set — both from Stargate’s famous craft services catering, and also in front of the camera at the S.G.C.’s commissary — including the fan-favorite blue Jell-O.

“I remember when we did ‘Urgo’ we had all those deserts,” Shanks said, “and I purposely skipped lunch so I could eat some ridiculous amount of pie. I remember that vividly!” 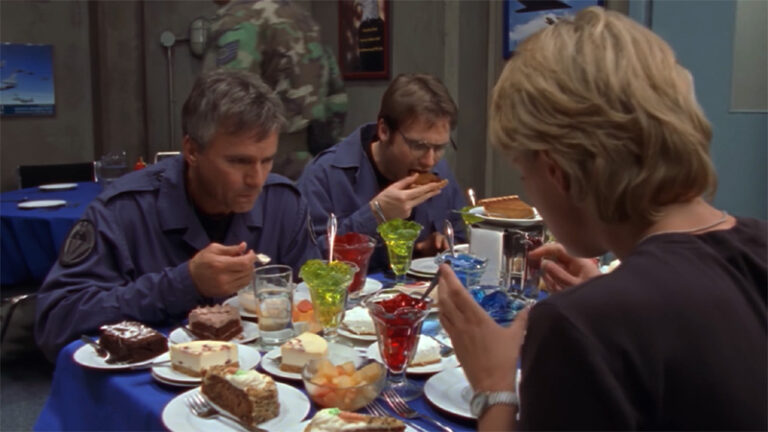 Tapping also confessed that she felt nervous around Browder when he first joined the cast in SG-1‘s ninth season. Browder came over to the series from Farscape, and was something of science fiction royalty for SCI FI Channel.

“When you came in I think we were all nervous, like we had something to live up to,” she told him. “I remember being really nervous around you at first. Not in a bad way — not that you made me nervous. Just wanting to impress.”

Browder responded, “Trust me, I was way more nervous than you were!”

As the conversation wrapped up Tapping brought up Brad Wright’s plan to have an A.I. write a Stargate script, which the cast would then perform in a table reading. “I’m curious as to what it’s going to come up with. I’m curious as to how Daniel dies,” Shanks laughed. “And Ben’s going to get the crap kicked out of him. … And you’re going to have to kiss somebody, Amanda. So … pick one!”

Check out the full, 42-minute conversation with Ben, Michael, and Amanda below. It includes Ben Browder’s pitch for the three of them to star in an historical comedy set in the Tower of London, so that alone is worth the price of admission!

Ok my mouth hurts from smiling so much. I love how at one point Michael and Amanda start competing at making thoughtful little noises.

This brought me so much joy thank you!

Yeah that was good wasn’t it. Lol 😂

I would legit watch that Tower of London show, forget the new Stargate*, someone greenlight this show now!

Thanks so much Darren, this was so enjoyable to see these together again. Now if the general was with them – Jack O’Neill

Does your Gatecon link have any info about getting information on going to it Darren? I’ve always wanted to go to a new one but I can’t find any information about setting it up.

Jeff: Over at Gatecon.com you just need to click on the front-page feature for the 2022 event. You’ll see the ticket info, and can then navigate using the sub-menu for this event (below the header).