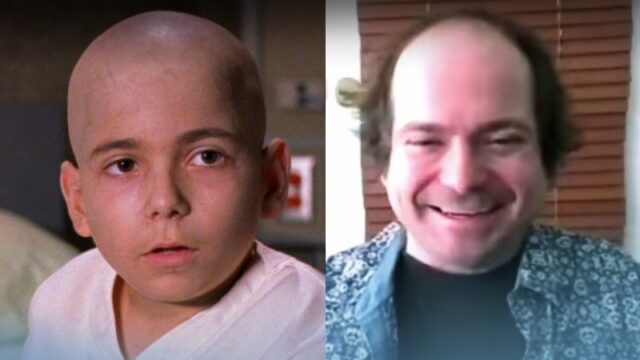 As a kid Jeff Gulka made a big name for himself on The X-Files, where he played the key role of young Gibson Praise. When a casting call came up for a child actor in an episode of Stargate SG-1 — which also filmed in Vancouver, B.C. — he was in prime position to land the role.

At the age of 11 Gulka played “Charlie,” a human child created by the invisible insectoid species the Reetou in order to serve as a go-between with Earth. The Reetou were a very cool, insectoid species who exist out of phase with our world, rendering them almost entirely invisible.

Charlie was human, genetically engineered in order to deliver a warning to Earth: a Reetou rebel faction was plotting a devastating attack, intent on fighting the Goa’uld by wiping out potential hosts. Young Charlie didn’t have long to live, and it made for an emotional relationship with Jack O’Neill (Richard Dean Anderson) when the boy chose the name of Jack’s own late son.

Now 24 years later, Gulka sat down with “Dial the Gate” host David Read to chat about his memories of the experience on set. He reflects on the casting process, working with the SG-1 cast … and the deal he struck with long-time Stargate SG-1 director Peter DeLuise.

“Peter made me promise if I got the part not to have any sugar on set,” Gulka said. “In exchange for it he gave me a Game Shark for the Sega Genesis console!”

Being a mediator between the Reetou and Stargate Command gave the young actor a lot of complex dialogue. “I’m usually pretty good with lines, even if I don’t know what they mean,” Gulka said. That talent certainly served him well as an actor, and especially on science fiction shows with complex mythologies like The X-Files and Stargate. “I was always good at memory stuff. It came easy, even though I probably didn’t know what I way saying.”

Since then he has also appeared on genre shows from Once Upon A Time to The Magicians, Van Helsing, and the modern reboot of Charmed.

For the full conversation with Jeff Gulka head over to “Dial the Gate” on YouTube! And subscribe to GateWorld’s YouTube channel for more interview clips and original videos every week.

wow,, first of all really enjoyed the character! second, looks like you got more hair with age! lucky guy!