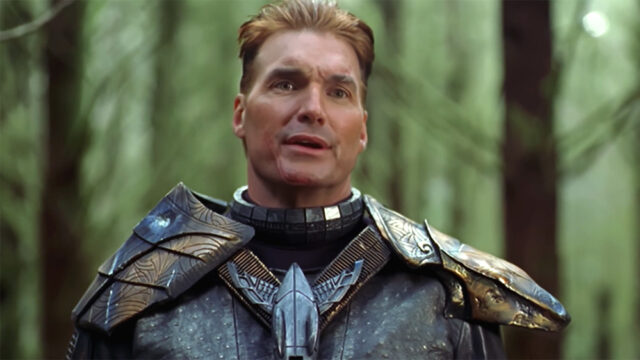 Stargate SG-1 gave us a lot of fascinating secondary characters over ten seasons, from the villainous Goa’uld to allies like the Tok’ra and the Tollan. Some characters are purely evil (looking at you, Sokar), and others pure as the driven snow (who doesn’t love Orlin?).

But of course some of the most interesting characters live in shades of grey, and that’s where Stargate fans found the character of Aris Boch. Played by Flash Gordon star Sam J. Jones, Boch was a bounty hunter and antagonist to SG-1. He captured them and held them at gunpoint (laser point?) in the Season Three episode “Deadman Switch,” eventually forcing the team to help him capture the Tok’ra he was hunting.

Boch was funny and interesting — confident, witty, and sporting his own unique tech. He wore armor impervious to zat blasts. He flew the very first cargo ship we ever saw on the show. He came from a race that the Goa’uld were mysteriously unable to take as hosts. And in the end he showed that he had a heart, destroying his own ship and letting his prisoner go free.

And then we never saw him again.

In a recent conversation with “Dial the Gate” host David Read, SG-1 executive producer Robert C. Cooper (who wrote “Deadman Switch”) finally spoke about the character of Aris Boch, and why the writers never crafted a story to bring him back. (Check out the clip above.)

“I wanted to create a Han Solo-type character who could be kind of a wildcard,” Cooper said. “Some episodes just don’t turn out the way you hoped. Some characters don’t kind of ‘pop’ the way you think they would. Compared to other situations on the show, where you can see something that really came alive — and it’s really no knock against Sam, or anyone who was involved in the episode — it just didn’t work as well [as I’d hoped].”

“I know fans liked it, and I’m glad they did. We just didn’t feel it was as successful as it could have been.”

Cooper and the writers didn’t give up on the idea of a wildcard and a lovable rogue, who the team wasn’t quite sure they could trust. Who did they eventually bring onto the show to fill that role? Cooper said that this character type would eventually bear fruit in the show’s eighth season, with a recurring role — and eventually a place on the regular cast — for actress Claudia Black. 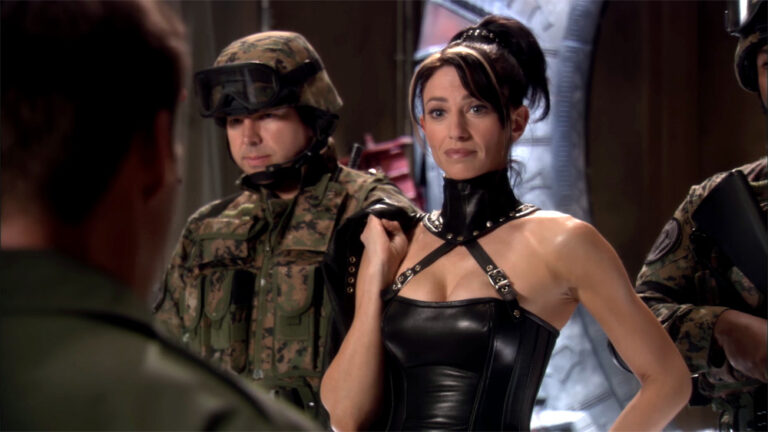 “The DNA of that character and the idea behind it, we tried again,” Cooper said. “And the next time we tried it, it was a lot more successful with Vala. … I think making it a female character, and then Claudia Black just brought something to the role that was special. And when that happens you’re like, ‘Yeah, that’s something that will be additive and bring life to the series.'”

“To become a part of the series in a meaningful way you kind of needed to see that real spark, and something special — which you got immediately with Vala.”

He would have been a great returning character. Always one step ahead and with a smirk to boot.

Yeah it’s called Vala had boobs, And the producers and show runners weren’t afraid to use them.

interesting. When Mrs Black joined the show, I feared it would turn into something “farscape” (a show I really tried hard to enjoy) – and I felt like it did. The entertainment of SG1 was lost. That is not to blame on the actress at all, but somehow she seems to always be written into a character that ruins it for me. I know most of my friends disliked Vala just as much as I did and skipped episodes with her entirely.
Well, to each how they feel.

See, I loved Farscape but Vala just didn’t “fit” into SG1 in my opinion… I didn’t stop watching because she joined but the team dynamic (excluding the introduction of Cam) was definitely off from there on forward…

And as someone mentioned, I think Cooper greatly overestimated how the character of Vala “worked” so well in the series… Maybe she was popular with the writers but beyond that?

I don’t think it worked as well as he thinks it did. The reason that I stopped watching Stargate was because of Claudia Black’s character.

From a story perspective…. Aris Boch was too much of Mary Sue to continue without fundamental changes to the character. It would also have required writing in a whole new race of people (or subspecies of Human? Not sure if that was ever clear.) I’d say he didn’t gel sell with the team, given he was written as an effective antagonist with a minor redemption. His arc was contained the episode and it worked, if not the most memorable. Vala on the other hand, though still written initially as an antagonist, had a lot more humour in her character (something… Read more »

I think he would have made a great reoccurring character in the series… The explanation sounds like BS… I think something else was going on there. I also think that Claudia Black’s character was excellent too. The thing that lost audience was the changes in storytelling, to many long overarching plot’s instead of concise episodes.

I don’t agree with the writers. Aris Boch did “pop” very loudly. A Season 9 episode with him and Vala would have been Wild! Much more so than the lame S10 eps with her Father. Jacek did NOT pop at all.

I really liked this character and enjoyed the episode. Really liked the possibilities Disagree with the fine Mr. Cooper.