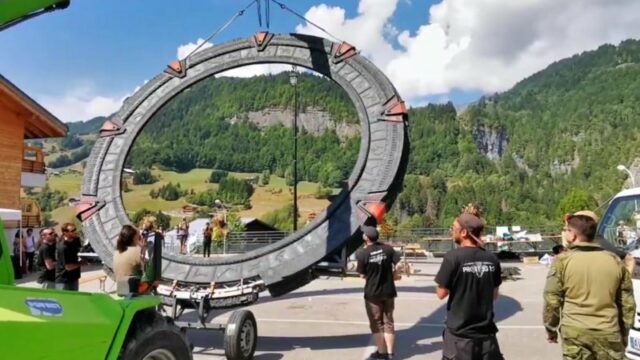 The Stargate is alive and well in France, and on display last week at a unique fan event in Savoy.

A full-scale replica Stargate was erected for science fiction fans to see and take pictures with, thanks to the heroic efforts of the Stargate fan group Les Enfants de MacGyver (EMG) — the “Children of MacGyver.”

It’s an incredible piece of work, screen accurate and complete with illuminating chevrons! The gate is made of resin and cast fiberglass, mounted on a wood and aluminum frame with a diameter of nearly 20 feet (six meters). The team has been working on constructing the gate for several years, and eventually acquired a segment of the original S.G.C. Stargate in order to help them produce a better match.

This is the first time the Stargate has been on display for the public. Take a look at the raising of the gate in this video from EMG:

The original gate props from Stargate SG-1‘s ten years in production were sold at auction and are now in the hands of private collectors.

The EMG team previously unveiled their 1:1 replica of the Atlantis Stargate in London back in 2019. (Check out that one in the video below.) That project took ten years to complete.

EMG told GateWorld in 2019 that the Atlantis gate weighed around 600 kg (more than 1,300 pounds!). That requires a crane to raise the gate for display, though it’s a good deal shy of the 64,000 pounds that the Stargate is said to weigh on the show.

The group isn’t done yet. The video states cryptically “It’s time to dream further,” ending with the hashtag #MakeItSpin — a reference to the infamous words of Puppet General Hammond in the 200th episode of Stargate SG-1. Their hope is to put the screen-accurate prop on tour at fan conventions, and also make it available for rental to private events.

“We really wanted a fully functioning Stargate,” EMG president Quentin Brichet told us in 2019. “The real goal from the beginning was to have the Milky Way Stargate with the spinning glyph track, the lighting orange chevrons, and the locking main chevron. So yeah, we’re going for all of that.”

Will the EMG gate spin the next time we see it? Follow the group on social media, and keep your browser locked on GateWorld! 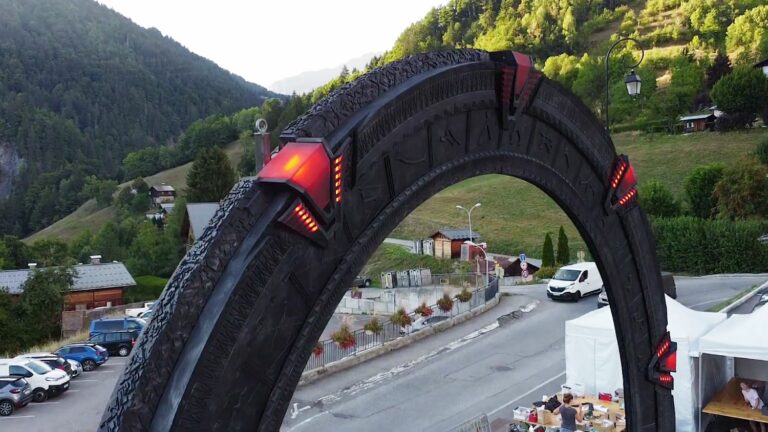 Omg that is so cool! Love seeing fans from around the world do stuff like this Fingers crossed stargate makes a comeback in the coming years.

When you say it is available for public, is it a permanent fixture that people can visit?

Alas, no — it was just a limited event in Savoy. But the EMG team is wanting to reach the point where their gate is available to be rented out for special events and displays.

I feel like this should be on a permanent display at a TV & Cinema museum (like the one in Turin, Italy) or similar. I hope one day we all fans can go and see it somewhere :)

Especially the SGA gate, that looks so sweet!!

Be right back, I need to convince my wife that we need that in our garden as a permanent fixture…

This is so amazing, so talents, so much dedication. I sure hope Amazon are paying attention.