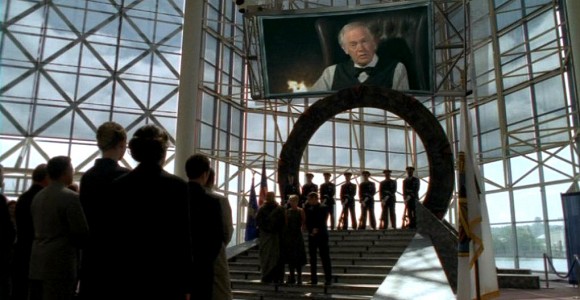 "2010" definitely captured and held my attention. Set ten years in the future and mostly outside the confines of the S.G.C., this episode showcased the talents of actors and behind-the-scenes personnel beautifully, and even provided its share of humorous surprises. Despite what I saw as flaws in props and research, I found "2010" to be thoroughly enjoyable.

Special effects, and set and costume designers were given new ideas to explore, and were able to believably depict what our nation's capitol might look like after ten years of rapid technological developments gleaned from an alliance with a generous and far advanced alien society. I liked the way the Aschen and the humans were distinguished from one another not only by the subtle difference is suit styles, but also through their apparent hearing sensibilities, shown as the Aschen plugged their ears when Daniel, Sam and Teal'c were saluted with gunfire.

As to set design and special effects, I found the J.R. Reed Space Terminal to be quite well conceived; and I was impressed with the lighting effects during the dinner scene at the restaurant when Dr. Fraiser, Carter, Daniel and Teal'c first address the Aschen conspiracy. A brilliant setting sun provides an intriguing atmosphere for that conversation, making the entire restaurant awash in an almost ethereal orange glow.

Of course, as with all episodes of Stargate SG-1, "2010" was much more than good sets and lighting, and the expected amount of subtle humor. Strong characterization and story-telling are even more important to my own continued viewing. And "2010" did not disappoint, managing to go even further than other episodes with respect to characterization.

This episode provided an opportunity for cast members to spread their wings and show more of their characters than what we are typically allowed to see. This is particularly true of Teryl Rothery (Fraiser), Amanda Tapping (Carter), and even supporting cast-member Gary Jones, who is finally identified with a name when Jack "christens" his character (previously known only as "Sergeant") with the first name of Walter.

It was nice to see Dr. Fraiser take on a greater role as she finally becomes an integral member of the group formerly known as SG-1. Rothery did a fabulous job of depicting a doctor whose job has been rendered virtually obsolete by the medical advancements of the Aschen, but whose military training quickly kicks in when she and Sam discover an Aschen conspiracy of devastating proportions.

While Carter battles an emotional outburst borne of despair for her recently discovered infertility, and anger at the Aschen for causing that very condition, Fraiser keeps a cool and calculating head, yet remains wonderfully "human" herself. Dr. Fraiser's voice cracks in sadness as she describes a cryptic phone conversation with General Hammond the night before his death six years earlier. Realizing now that Hammond's death must have been caused by the Aschen, she is clearly disturbed -- but not overly so, managing to maintain the amount of poise and control required given the circumstances at hand.

My focusing on Fraiser's cool head is not meant to belittle Sam Carter's emotions, nor Tapping's depiction of those emotions. On the contrary, Tapping also did a splendid job, giving us a character whose long-held hopes for raising a family with her husband, Joe, have just been shattered, and who must blame herself to some degree for the Aschen's actions. As the primary physicist at the S.G.C. and a key member of the S.G.C.'s primary team, perhaps if she had shared Jack's suspicions of the Aschen ten years earlier, they might have avoided their current situation.

I liked that the character of Joe was also three-dimensional, despite his relatively minor role. As ambassador to the Aschen, he is aware of their plans to limit human reproduction, yet he is not an evil character. When Sam informs him the global infertility rate is in excess of 90 percent, he is stunned by the scale, saying it was supposed to be a third of that. The ensuing argument between Sam and Joe is the most emotionally charged scene of the episode, with Joe claiming his holding this secret is no different than the secrets Sam has held throughout her career. Yet they never lose trust in one another, and Joe comes through in the end, supplying the team with the needed G.D.O.

Jack even comes back in "2010." While the dumbing down of Jack O'Neill has been a hotly-debated subject this season, here he is seen correcting the grammar of Sam's ambassador husband; and, more importantly, it becomes clear that Jack was the only member of the S.G.C. who never trusted the Aschen in the first place.

Good ol' Jack was right all along. Pity no one believed him. That lack of belief obviously made him bitter, not only against his friends but humanity in general -- undoubtedly because of the loss of those friends due to their failure to trust him. Even Teal'c is distanced from him, something which I would never have thought to see. The character development here was dead-on. Given the Jack O'Neill who had just lost his son to his own gun in Kurt Russell's movie, and even the slightly revised version who had finally lost his wife as well in the first episode of the series, a cabin in the woods, far from humanity, is precisely where I would expect to find a Jack O'Neill whose new-found family in SG-1 has apparently abandoned him by refusing to see and share his concerns.

All in all, the characterization in "2010" are what gives it its strength. It was brilliantly scripted and acted, and absolutely believable.

The flaws in "2010" are somewhat obscure, falling outside the scope of everything I've discussed here so far. Now, I know the Tollan told Sam that our understanding of quantum physics was completely wrong, but this should have been addressed somehow, regardless.

Current theories suggest that time travel is a possibility, but that events in a given dimension would not be effected by a change to events earlier in the timeline. Rather, if we change events in our past, we create an entirely new thread of time, without erasing our present thread of time. In other words, we create an entirely new dimension. Yet Sam clearly states on more than one occasion that if SG-1 succeeds in its attempts everything that has occurred within the past ten years will have been erased.

Perhaps this belief could be said to have helped inspire Sam's teammates and friends to accept this suicide mission to send a note back to the S.G.C. of ten years earlier. Okay, at least that's the excuse I'm giving the writers. After all, it was a valiant effort for each of them and a horrible thing to see, as one by one our favorite explorers die under the constant bombardment of laser fire.

I might say there was a third flaw, but at least the writers did not neglect it -- that is, why couldn't they just wrap the note around a rock and throw it through the wormhole? Well, good ol' Jack thought of that one too, but Daniel -- not Sam, as I would have expected -- replied that it would never make it past the lasers. Somehow, I think if each of them threw a rock, at least one of them would stand a greater likelihood of making it through than a much bigger human target; but, as I said, at least this idea was not ignored.