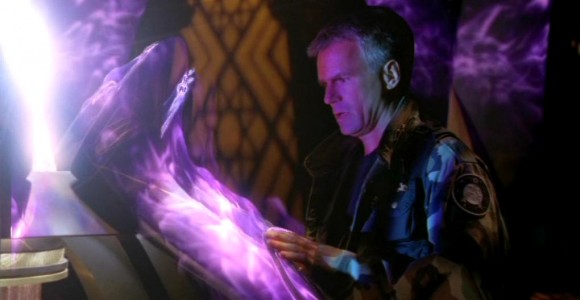 In addition to presenting a fascinating scenario involving the subtle and dangerous narcotic effects of an unseen form of energy and a mesmerizing light, "The Light" is brilliantly acted. Michael Shanks (Jackson) and Richard Dean Anderson (O'Neill) give marvelous performances, as does Kristian Ayre, who plays the abandoned then orphaned boy, Loran. This is an episode that plays heavily to the emotions of its audience. It is, however, a little light in certain elements of plot.

Unfortunately, "The Light" does not come to life as well as it could have. I was left with the feeling that the story had been rushed into production before it was ready. There are holes that should have been covered, if not completely filled. Foremost among these holes: why was SG-5 so utterly absent, and how could Daniel have been so certain the palace had been abandoned for centuries?

The idea of a dazzling light with hypnotic affects really did fascinate me. I thought that part of the story was done quite well. With Teal'c and Sam especially transfixed by this light, I can't quite understand why SG-5 could be successfully recalled back to the S.G.C., not having completely fallen under it's spell themselves. Likewise, why is Jack able to pull himself away?

Yet I'm not bothered by these potential inconsistencies. I can accept the possibility that at least one member of SG-5 stayed out of the "light room" and was able to draw his or her teammates out; as I can also imagine that Jack, as his team's C.O., could maintain enough focus to fulfill his responsibility.

I also enjoyed the story behind Loran. The poor boy arrived on the planet some years ago with his "explorer" parents, and was summarily abandoned when they became "hooked" on the light. Suddenly they were junkies, and there was nothing Loran could do to draw them away from the thing that had drawn them away from him. Nothing except stop bringing them food.

I was deeply touched by the idea of this young boy having grown up alone. His interactions with SG-1 are wonderfully moving, especially when he gives Teal'c his toy gun as a birthday present, and when he finally breaks down, admitting to Jack how his parents had died. This young actor's skills are exceptional. I would have liked to see him interact more with Teal'c and Daniel. I believe there was quite a bit of missed opportunity there.

One scene that brings out the best in the principal actors is the balcony scene. The image of Daniel leaning out over the courtyard, a hand-grip away from falling to his death, is a haunting one. The expression on his face is one of heart-wrenching torment, while the cloudy sky serves to accentuate his desperation. I was profoundly moved by that image, and by the sincerity in his hopeless words. Wow. I can envision it still, as I'm sure I will for a long time to come.

Jack also had some marvelous scenes. The moments when he himself is transfixed by the light, his anger at his complete helplessness in the infirmary while his friend "is on his deathbed," his realization that he is coming down with Daniel's initial symptoms -- are all superbly done, in typical Richard Dean Anderson fashion.

There were, indeed, so many great scenes, I find it doubly disturbing to note the plot holes mentioned earlier.

SG-5 has an important role in this story. They are with Daniel in the palace of the light. They suffer his symptoms, and finally succumb to those symptoms, prompting the warning that Daniel is truly at death's door. However, this team is portrayed as a distinct non-entity, with the single exception of Lieutenant Barber, who commits suicide in a head-on collision with a forming wormhole.

Where are they when Hammond is briefing SG-1 on Barber's death? Why aren't their opinions regarding the Lieutenant's state of mind prior to his suicide as important as Daniel's? They were his team, not SG-1. Their observations should have been far more accurate than Daniel's. The commanding officer of SG-5, at the very least, should have been present for that debriefing.

Apparently, this team only exists as a means to move the main plot along, that is, to get Daniel affected by the light and set the rest of SG-1 on the task of finding the cause of his odd behavior and deteriorating health. Any further mention of this ghostly team seems to have been an afterthought. Sometimes mere reference to another SG team is sufficient to complete a story. That is not the case here, however. SG-5 needed some air time, certainly more than the nameless extras who emerge with Daniel when the team is recalled to the S.G.C.

There are also some flaws in set design. Daniel seems completely convinced that the palace of the light had been abandoned by the Goa'uld hundreds of years ago. Yet I saw nothing to suggest how he could have been so sure of this observation. The palace appears deserted, certainly. But its desertion might easily have been a recent event. There are no falling ceilings, no doors hanging askew. The Goa'uld symbols look like they had been painted yesterday. Even more telling, however, there is no dust or sand or any other debris on the floors.

We later learn that the palace is directly on the shoreline of a body of water. Tides rise and fall. Storms must have occurred at some point during those long centuries. Unless the palace was hermetically sealed, sand, at the very least, should be a frequent pest. Perhaps Loran has been a dedicated housekeeper; yet Daniel makes his observation prior to being made aware of Loran's existence.

The end also seems a bit sudden, somewhat contrived. Daniel's and Teal'c's translation of "instructions" and Sam's insistence that they need only reduce the source of their addiction in small increments over a period of two or three weeks all comes about too suddenly. It is too easy, too neatly packaged. Further, Daniel's recovery from imminent death is taken for granted. After such brilliantly emotional performances earlier in the episode, I was ultimately left feeling empty. Like Loran, I was abandoned.

If I could overlook these problems, I could easily claim this among my favorite of episodes. As it is, however, I must claim it among some of the "second best."

"The Light" has great "Wow" potential. But someone acknowledged it as finished before it truly was, and it suffers as a result.