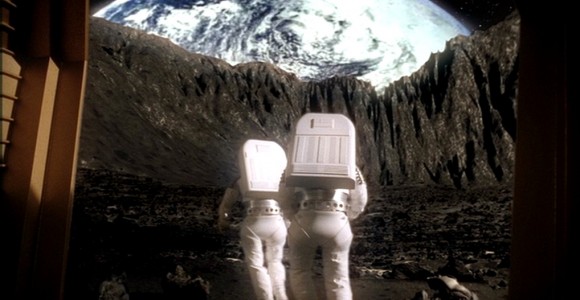 Earth finds itself threatened by something even larger than the Goa'uld when the team learns that an asteroid is on a collision course with the planet.

Julius Caesar may have been more succinct with Veni, Vidi, Vici ("I came, I saw, I conquered"), but Jack O'Neill accurately provided a pithy synopsis of the endeavors in "Fail Safe" with, "We came. We saw. We planted the bomb. We had a little fun with a meteor shower. We went home. It's a great story, isn't it?"

Although O'Neill mentioned that he has never seen Star Wars ("Ascension"), apparently he has seen one or more of the Earth vs. Asteroid / Meteor movies, because when informed of the pending danger to Earth, Jack remarks to Daniel, "I've seen this movie. It hits Paris."

Not only does SG-1 out-do Armageddon and Deep Impact (and other films of this genre), but SG-1 had to contend with a booby-trapped asteroid! (I can hear Jack now, "Oh, how arch!")

After the angst of the last several episodes, and watching the SG-1 team working divided either individually or into smaller component units, it was a joy to watch the team work together in this episode that was, despite the scope of its potential impact, a little more light-hearted in its delivery.

While some viewers may dismiss this episode as a bit of fluff, the episode gained significance when it was revealed that 45 percent of the asteroid's total mass was made up of naquadah. Naquadah, according to Teal'c, is not native to our solar system, and the presence of it established that the asteroid was brought in from somewhere else. Therefore, the evidence pointed to a Goa'uld plan to circumvent the protected planets treaty ("Fair Game") by eradicating Earth with a manufactured natural disaster. Apparently Anubis has immediately begun the process of fulfilling his promise to the System Lords to eliminate the threat of the Tau'ri ("Last Stand").

The one element in the plot that I found inexplicable was that all the wires in the bomb were yellow, when Sam clearly expected the designated wire to be red. Was this an indication that the bomb had been sabotaged, perhaps by the N.I.D.? In the movie The Abyss, the fact that Virgil 'Bud' Brigman couldn't distinguish between the colors of white and yellow on the bomb wires was due to the extreme depth that he was at (no natural light) and that he was using a yellow glow stick for illumination.

Both Joel Goldsmith and Richard Band contributed to the music in this episode. I don't know which composer contributed which segments, but there were a couple of new themes (it sounded like to me at least) in this episode, and they were very interesting. In the scene when Jack and Teal'c first do their space walk, and we can see Earth rising above the asteroid's horizon, I thought the theme sounded similar to the opening movement from Maurice Ravel's "Balero."

Supporting actors Don S. Davis, Teryl Rothery, Gary Jones and Colin Cunningham provided excellent emotional support back at the S.G.C. Particularly moving was General Hammond's stunned reaction to the news that SG-1's cargo ship must have impacted on the asteroid; his announcement that "I haven't been relieved of my command;" and his quiet, reserved wait for the fail safe deadline.

Special effects were again in top form. Interwoven among the space program footage provided by the NASA Lyndon B. Johnson Space Center, were the impressive matte paintings by Jeremy Hoey. The hyperspace effect of riding the asteroid through the Earth was quite imaginative. The cargo ship descending the asteroid crater was fascinating -- reminded me of a falling snowflake.

The new EVA space suits were impressive, definitely an upgrade since "Nemesis." I noticed that Teal'c and Jack's ear receivers were held in place with tape -- a nice attention to detail, as they certainly couldn't open their helmets to replace them while on EVA.

I wonder if this recent effort in saving the planet will get Jack another invite to the White House?

"Fail Safe" helped remind us that even though SG-1 travels all over the galaxy, sometimes the biggest threats show up at our own backdoor -- unannounced, and uninvited.