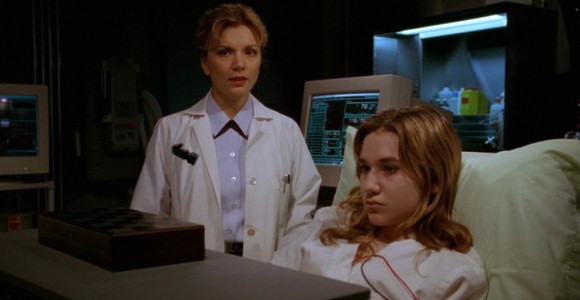 Cassandra mysteriously falls ill, sending SG-1 back to her home planet – where they uncover a dark Goa'uld secret.

In her nearly four years living on Earth, Cassandra has become a beautiful young woman. She's also become a typical teenager, preferring to go out with her boyfriend than hang out at home and have birthday cake with Janet Fraiser (her adopted mother) and Samantha Carter.

When she and Janet clash, Cassie meets young Dominic on the porch and asks him to wait a few minutes. He gives her a birthday present, and they exchange a kiss – but Cassandra falls unconscious, and the porch light explodes overhead.

Sam and Janet rush her to the S.G.C. infirmary, where they discover that her body is generating a low-level electromagnetic field. And she is dying, having been infected with a retrovirus that has laid dormant in her system since she was taken from the planet Hanka four years ago – after the Goa'uld Nirrti wiped out her people, and killed an S.G. team.

Dr. Fraiser learns that the retrovirus is rewriting Cassandra's D.N.A., transforming her into something else. Her brain activity rises to as much as 25 percent above normal. Janet tries to slow the virus down with medication, but has no ability to save her daughter. SG-1 must return to Hanka (P8X-987) to look for answers.

Jackson digs out video taken by SG-7 during their mission to Hanka, before Nirrti's attack. He finds video of a teenager who showed the same signs as Cassie – something the locals call the "mind fire." When young Hankans reached this age, the condition set in, and they went into the forest as a sort of "rite of passage." When they returned a few days later, they were cured.

In her delirium, Cassandra herself speaks of "going into the forest." SG-1 checks out the woods near her old village, and makes a shocking discovery. There is a Goa'uld laboratory deep underground, reachable only by a ring transporter system. They theorize that Hankan children would wander into the forest and find their way into the lab, where Nirrti would study them, heal them, and return them to the village.

But why? What was Nirrti trying to create with the retrovirus? The only clue is the word "hok'taur" – a slang term meaning "advanced human."

Back on Earth, Cassandra's fever rises as her condition worsens. She begins to exhibit incredible telekinetic abilities, and the electrical field she is generating affects every system around her. She pushes Janet away, telling her that she wants this transformation to happen. She knows that she is becoming something special.

But Fraiser pleads with her to fight the virus, arguing that her body can't handle what it's doing to her. If she doesn't fight, she may die.

SG-1 returns to Earth, believing that Nirrti was attempting to engineer an advanced breed of humans – complete with telekinesis, and possibly other abilities – to use as a new host. Children were healed and returned home so that they would pass on their genes, incrementally evolving the race. But when Nirrti found an SG team on Hanka, she destroyed the planet's population for fear that her experiment would fall into the hands of a rival Goa'uld.

Cassandra screams for help, and the team rushes to her side. She claims to have sensed the presence of a Goa'uld. Recalling that Nirrti had the ability to become invisible ("Fair Game"), and that she might be free now that Cronus is dead ("Double Jeopardy"), they break out transphase eradication rods (T.E.R.s, capable of illuminating her cloaking technology) and begin a sweep of the base.

With no place to hide, Nirrti attacks O'Neill and Fraiser in an attempt to get at Cassandra, but is captured. When SG-1 found her laboratory, it notified her. She followed them back to Earth, and has been watching Cassie's transformation ever since. The girl is a valuable key to starting her research on a new planet.

General Hammond demands that she use every means at her disposal to save Cassandra's life. Nirrti offers a deal: she will save the girl if they let her go, and give her a sample of Cassandra's blood. Hammond refuses, and locks her up.

But Cassandra's condition has grown steadily worse, and it appears that there is no other way of saving her life. When Janet realizes that she can do nothing, she knocks out Nirrti's guard and draws a pistol on the Goa'uld, demanding that she help.

Hammond orders the doctor to stand down, but she refuses. But he tells her that this isn't necessary – SG-1 has already convinced him to let Nirrti go in exchange for her help. But she's refused a sample of Cassandra's blood.

The Goa'uld agrees, and is able to restore Cassie's body using a Goa'uld healing device together with a piece of technology that SG-1 brought back from her lab. Cassandra can return to being a normal teenager.

Nirrti is somewhat surprised when O'Neill escorts her to the Stargate and keeps their end of the bargain. But she promises to begin her experiments again on another world.