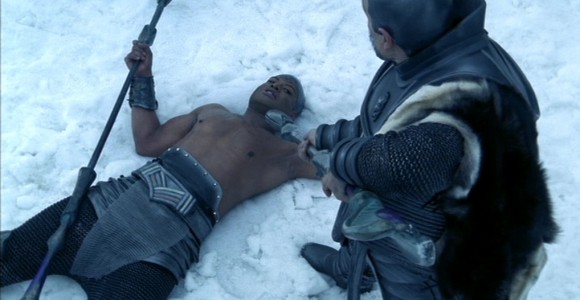 His mind altered by Apophis, Teal'c must undergo a ritual that takes him to the edge of death itself, in order for him to rediscover who he is.

Season Five is certainly off to a great start. "Threshold" is the second episode of the season, and the second "winner." I thoroughly enjoyed this trek through Teal'c's psyche, where we could finally get to know the series of faith-changing events that led to his betrayal of a being he'd once considered a god.

In many ways typical of the fantasy genre, these glimpses into Teal'c's progression from loyal servant to First Prime to shol'vah (or "traitor") still manage to avoid cliché, with the possible exception of a scene in which Teal'c is blindfolded and forced to fight Master Bra'tac. This scene is reminiscent of many well-known moments, both on screen and in print -- the most famous of which is clearly represented by Luke Skywalker's training with Obi-Wan Kenobi in the original Star Wars movie.

However, I'm not at all bothered by the similarity. Given characteristics we've seen in both Teal'c and Bra'tac, I would expect something of this nature in Teal'c's past. Simply put, the scene works; and it works very well.

I also like the added touch of a bare-chested Teal'c in the middle of winter, the student here being forced to battle his own body's desire for warmth; yet at the same time I think the crunch of snow underfoot should actually make it easier for him to hear his master's movements and thus react more successfully.

Still, that winter setting serves yet another, less obvious purpose. None of our previous excursions to Chulak have involved snow, or even hinted at the possibility of winter's arrival. Here, however, we see a snow covered hill and a sky that suggests more might be on the way. I found this a fascinating allegory into Teal'c's life. Where normally we link winter with old age, Teal'c's winter occurred when he was still serving Apophis, the cold and ice symbolizing the nature of his heart at the time.

Master Bra'tac, epitomizing the mentor figure such that fantasy heroes typically strive to emulate, also manages to break the mold. His only goal in proving Apophis as a false god is to guide Teal'c into becoming the System Lord's heart. "Apophis' will can be made to bend," he tells his apprentice. It is only through Teal'c's eyes that he later sees a new vision. Thus the teacher learns from the student, though even then he does not cease his role. He continues to teach, even to the point of taking Teal'c through a "last rite," which he ultimately expects to be a passage to death.

Even so, Teal'c's learning is not limited to the lessons of the teacher. He trusts in his own observations, and learns his greatest lessons from his old friend, Va'lar, as well as from Apophis himself.

Apophis intends to teach Teal'c an important lesson on faith when he orders Teal'c to kill Va'lar. What the System Lord can not anticipate is the direction that lesson will take. Rather than helping Teal'c to understand the importance of serving his god, Apophis instead helps Teal'c to recognize his own lack of omniscience. Teal'c is able to lie, claiming Va'lar is dead. If Apophis were not a false god, he would surely see the lie. Instead, he says Teal'c has done well.

Perhaps Teal'c's greatest lesson, however, involves the actual death of Va'lar. When Teal'c is commanded to burn down the village Va'lar has taken refuge in, he realizes Va'lar must die to hide the fact that he was allowed to live. It is a bitter irony that haunts him. This presents somewhat of a puzzle, for despite these harsh lessons, Teal'c is later seen running up to his master, Bra'tac, practically bouncing like an excited puppy in his eagerness to announce he has finally risen to the status of Apophis' First Prime.

Thus his learning is not yet complete. His doubts grow, though his service does not falter. Apparently, as Bra'tac taught him, he lives to serve as Apophis' heart. (This is something we have seen before, most particularly in Season One's "Cor'ai"). It is not until much later, when SG-1 first arrives on Chulak in their failed attempt to rescue Sha're and Skaara ("Children of the Gods"), that Teal'c sees a better vision -- one of freedom. This is where Bra'tac becomes the student until he can share that vision.

Scenes at the present-day S.G.C. provide the obligatory glimpse at our other favorite cast members, as well as the vehicle to move us through several years of Teal'c's life in mere minutes. However, these moments are far less important, less entertaining and in some cases even less believable or real than the scenes from Teal'c's past.

By "less real," I refer primarily to Daniel Jackson's inability to mentally process Teal'c's delirious utterance of "Va'lar," the name of an old friend. I find it impossible to believe our resident linguist heard this as "velour." This kind of misnomer, typically linked to Jack, is uncharacteristic of someone who studies languages, and, by default, pronunciations. It might be argued that the play on words is simply an indicator of Daniel's obvious discomfort in dealing with a brainwashed Teal'c, a sense that is further revealed by his inability to determine what to say when first prompted by Bra'tac to challenge Teal'c mentally and emotionally. Even so, it doesn't work here.

I do like the way this season is capturing the progressive nature of the relationship between Jack and Daniel. It is clear that Daniel sees Jack in some ways as a mentor. This has been obvious over the years in the evolution of the character of Daniel Jackson, portrayed originally as somewhat of a geek, yet more recently as someone who is strong and quite physically capable in his own right.

The changes in Jack have been far more subtle, but he has become more "human" in Daniel's company. While still thoroughly military-minded, he is growing less emotionally distant. I like that it is Jack, Teal'c's closest friend, who actually initiates the great "challenge" intended to lead Teal'c on the path to recovering his mind -- and his soul. Thus, in a way, the ultimate soldier becomes a spiritual guide; and thus we see another twist in Jack's own rite of passage.

Teal'c's path to the betrayal of his god was a harsh one. How unfortunate for him to have to relive it when he is taken to the threshold of death. But how fortunate for us! "Threshold" is a wonderful episode for story telling. Teal'c's delirium serves as our transport through the past, yet the shifts from past to present and back again are easy to follow, and never confusing.