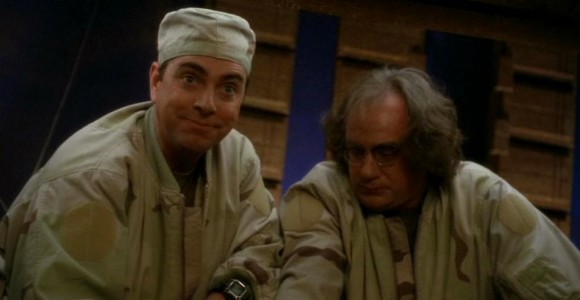 When SG-1 is captured by the Goa'uld, a pair of scientists mount a rescue operation ... whether they're wanted or not.

Three scientists study an ancient Goa'uld ring transport platform on a dusty alien world, as SG-1 "baby-sits." One of the scientists, Jay Felger, watches on in astonishment. He hero-worships the team, and is excited to be in their presence. His friend, Simon Coombs, tells him to get back to work.

But a Goa'uld ship suddenly flies overhead, and a battalion of Jaffa warriors are transported to the surface. SG-1 is pinned down in a firefight, and Colonel Jack O'Neill uses his radio to order the scientists to lay low and head back to Earth as soon as possible. The three men creep up to the edge of a hill in time to witness SG-1 being captured by the Goa'uld.

Felger wants to try and rescue them, and tells the other scientist to report back to Earth. He and Coombs use the ring platform to transport themselves up to the ship before it leaves orbit, and arrive undetected. Coombs is a nervous wreck.

The Jaffa, led by Herak, toss the team into a prison cell. They will be taken to a planet under the control of Anubis, where their master Khonsu – a minor Goa'uld in the service of Anubis – awaits. Khonsu ordered the live capture of SG-1.

Felger and Coombs find the team, and try to break them out of the cell – only to learn that the team doesn't want to go. Colonel O'Neill explains that they're on a mission; Khonsu is a Tok'ra operative with vital information to relay, and this is the only way he can do it without being discovered. Khonsu has learned where Anubis has been getting his advanced technology ("Between Two Fires", "Revelations").

The cell door opens, and a small group of Jaffa enter. Felger and Coombs try to hide behind SG-1, but are discovered. But the soldiers are members of the free Jaffa movement ("The Warrior"), and are loyal to Khonsu the Tok'ra, there to help facilitate SG-1's mission and eventual escape. O'Neill asks them to take the scientists and hide them someplace safe until the mission is over.

Felger and Coombs hide behind a stack of crates in a storage room on board the ship. But when the vessel arrives at its destination, they witness the free Jaffa shot and killed by Herak and his men. Felger and Coombs dress up in the dead men's Jaffa armor and head out to the planet's surface, where SG-1 is being brought before Khonsu.

When the team arrives, however, they learn that the Tok'ra is dead. He had been a known spy, and was shot dead by Herak once SG-1 was in custody. Herak demands that O'Neill reveal the names of all the Tok'ra spies within Anubis' ranks, and imprisons the team behind an energy force field when he gets no information.

Felger and Coombs find a control room inside the facility and communicate with SG-1. Felger heads for the closest armory, while Coombs manages to lower the shield. SG-1 escapes, and Felger brings them zat guns. The scientist has a plan: they'll escape the facility, then signal Coombs to ring out and head for the gate.

The team makes it outside and to the Stargate, battling Jaffa left and right. But Felger learns that Coombs is trapped in the control room. The Jaffa have found him, and are breaking through the door. SG-1 heads back inside, take out the Jaffa at the door, and rescue Dr. Coombs.

Herak and the rest of his men are too late, and catch the team at the Stargate just as they escape to Earth.

Back at the S.G.C., Felger and Coombs are presented with medals for their bravery in helping to rescue SG-1. Colonel O'Neill salutes them, and the beautiful Major Carter plants a big kiss on Felger's lips. If only it wasn't all in his mind ...