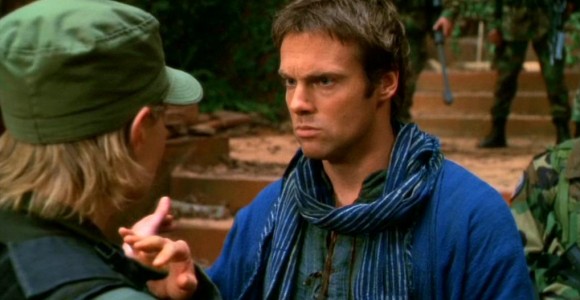 SG-1 discovers Daniel Jackson alive and living on an alien world, with no memory of who he is. The team hatches a plan to lure Anubis into a trap and destroy his new super-weapon.

On the planet Vis Uban, once home to the Ancients, a group of nomadic villagers walks across the field toward the forest. There is a brilliant flash of light, and a man appears, naked, lying on the ground. They approach him and ask him who he is, to which he replies, "I don't know." It is Dr. Daniel Jackson.

On Earth, Jonas Quinn continues his attempts to translate the tablet of the Ancients discovered on Abydos ("Full Circle"), which supposedly tells of the Ancients' Lost City, where they hid much of their advanced weapons and technology. Using Dr. Jackson's notes as a reference, Jonas stumbles upon a revelation, and rushes to tell General Hammond and Major Carter.

Jonas theorizes that the Ancients couldn't have actually lost a city – they only abandoned the newest city they were constructing when a plague nearly destroyed their civilization (when those who survived ascended to a higher plane of existence). Vis Uban was to be the crown jewel of their civilization. Since it was unfinished, it would probably be the last gate address on the list of those that Colonel O'Neill entered into the base computer when he had the Ancients' library downloaded into his brain ("The Fifth Race").

SG-1 gates to the planet and find the ruins of a half-built city. A nomadic group of humans have moved in, and have taken in a stranger they found. The team is astonished to see Daniel walk into the village, dressed as one of the villagers. He has been living there for two months, and has no memory of who he is (or who they are).

The team tries to remind him of his life on Earth, as a member of SG-1, but Jackson is reluctant to explore any of it. He fears that he has done something terrible, or that something terrible has happened because of him and he's not sure he will like the person he use to be. Nevertheless, he finally agrees to return to Earth with SG-1.

O'Neill shows him to a room on the base where he can stay, where they've unpacked some of his personal belongings. Daniel finds a photo of Sha're, his deceased wife, and begins to make a connection with his past. He excitedly talks of her to Teal'c, who must tell Daniel that she is dead. As he continues to explore his past and speak with his friends, some memories begin to return to him. The team theorizes that his amnesia may have been a punishment for breaking the Ancients' rules and interfering, but that Oma Desala (his ascended mentor, and always one for toeing the line) may have made it an imperfect amnesia to get around the sentence. He will regain his memories in time.

The S.G.C. combs the ruins at Vis Uban, but finds nothing in the way of advanced technology. Daniel discovers that he has retained the ability to read the Ancient language, and corrects Jonas's translation and interpretation: the Ancients hid their "Lost City" when the plague wiped out their civilization. Now, Vis Uban provides them with an opportunity to lure the powerful Goa'uld Anubis into a trap, in order to destroy the new super-weapon that Jackson handed over to him ("Full Circle").

The Tok'ra make sure that Anubis finds a fake version of the Ancients' tablet, leading him to Vis Uban. Once he arrives, O'Neill and Carter will pilot the F-302 through the ship's shields (with an instantaneous hyperspace jump, made possible by the rare element naquadria) and destroy the super-weapon's exhaust system – destroying Anubis' big advantage over the Goa'uld System Lords.

But first, Daniel and Jonas ambush a pair of Jaffa and ring up to the ship. They have been injected with a radioactive isotope developed by the Tok'ra, which will shield their life signs from the ship's sensors for exactly eight hours. The two access a computer and find the location of the exhaust vent, relaying it to O'Neill and Carter in time for the attack.

Meanwhile, Teal'c pays a visit to Lord Yu and proposes a temporary alliance in order to destroy Anubis's advantage over Yu and the rest of the System Lords. Yu will take the System Lords' fleet into battle at Vis Uban, attacking Anubis after the weapon is destroyed. Yu agrees, and Teal'c remains on board the flagship with his First Prime – who is concerned about his ailing master's physical and mental health.

The F-302 effectively engages a squadron of death gliders, destroying one of them with its new weapons system. The hyperspace jump is effective at getting them past the shields, and the target is hit. A massive explosion rocks the ship, and the super-weapon is eliminated.

The fleet, however, never arrives. Yu orders his First Prime to turn the fleet around, and Teal'c is thrown into a prison cell when he objects.

Anubis is furious, but he does have one consolation prize. His Jaffa capture Jonas, while Daniel escapes into the bowels of the ship. Jonas swears to tell him nothing, but Anubis reveals his intention to implants a device into Jonas's brain that allows him to download everything he knows.