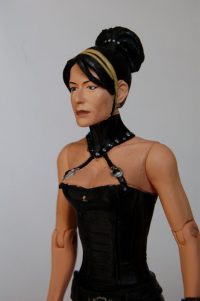 The former host of the Goa’uld Qetesh, Vala Mal Doran spent several years as an intergalactic thief and con artist before trying to steal the Prometheus. As fate would have it, Vala became the fifth member of SG-1 in order to fight against the armies of the Ori — a force led by her own daughter.