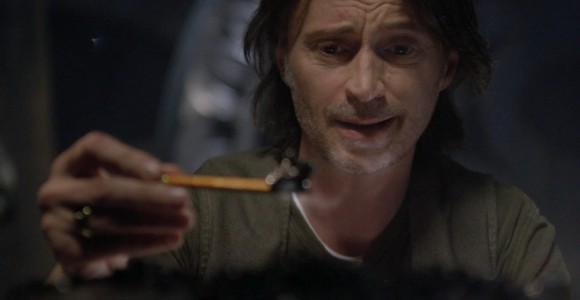 Stranded on the Ancient vessel Destiny, the evacuees from Icarus Base discover that a worn-out life-support system and hull breaches will suffocate them in a matter of hours.

It has been only a matter of minutes since the evacuees from Icarus Base arrived on a derelict Ancient ship traveling through another galaxy, billions of light years from Earth. Most of the civilians and soldiers are still in the Gate Room of the ship, where Lt. Matthew Scott begins to organize search parties. The injured Colonel Young is being tended to by their only medic, Lt. Tamara "T.J." Johansen.

As the soldiers and able-bodied men and women busy themselves fanning out through the ship's corridors, Dr. Nicholas Rush picks up Colonel Young's backpack and exits the Gate Room. T.J. eyes him with suspicion.

Rush finds a private room, and using a lighted box (an Earth-engineered communication pad) and one of the Ancient communication stones he finds in Colonel Young's pack, he swaps consciousness with a waiting Dr. Bill Lee on Earth.

Searching the ship, Lt. Scott, 2nd Lt. Vanessa James and Sgt. Riley come upon a locked door. In the ship's control room, a red light on an interface panel tips Eli Wallace to their location. He opens the door remotely for them at Scott's request, and air rushes out through a huge section of an observation dome that is open to space. Apparently the ship has suffered significant hull damage in the many hundreds of thousands of years it has been flying through the universe, unmanned. Eli reseals the door as Rush orders everyone back to the Gate Room.

Once everyone has reconvened, Rush reveals the existence of the stones – which will allow them to instantaneously communicate with Earth. He also tells the crowd that he has already communicated their predicament, and that General O'Neill has been put in charge. Senator Armstrong and others cry foul. His agitation precipitates a cardiac event, and his daughter begs Lt. Johansen to help him.

Rush suggests people find comfortable quarters instead of congregating in the Gate Room. But I.O.A. representative Camille Wray and others loudly refuse to settle in – and refuse to recognize Rush's authority. Scott puts forth his military authority and restores order, and everyone reluctantly disperses. He tells Dr. Rush that he thinks they are going to need him, so he has his back ... for now.

MSgt. Ronald Greer, Dale Volker, Andrea Palmer, Sgt. Riley, a Marine and Wray inspect the cases brought from Icarus Base. Wray confronts the now-armed Greer about having been in detention before the attack. Before their argument escalates, Riley steps in, and Greer is called away by radio.

Meanwhile, the Marine quietly pockets a number of protein bars. With limited supplies on the ship, the hording has begun already.

Lt. Scott continues to explore the ship, and enters an elevator. He spots a flying orb and pursues it, nearly shooting Eli, who is monitoring the device. It's a flying camera ball he's dubbed a "kino." Eli is clearly thrilled with this new toy, but Scott has little patience for it. They take the kino to the Control Room, where Rush marvels at the discovery.

Meanwhile, Young finally awakens and tells T.J. that he can't feel his legs. Unable to confirm whether this is permanent or a temporary paralysis, she updates the Colonel on Dr. Rush's use of the communication stones – and his insistence that he is now in charge. Colonel Young wants to see Rush immediately.

Delivering the order to him in person, T.J. lingers as Rush oversees opening the air scrubber compartment in the Gate Room. The unit is covered in black sludge. Not only is the air supply running low, but carbon dioxide is now building up. The ship's life support system is well beyond its expiration date.

Meanwhile, the ailing Senator Armstrong is tended by his daughter, Chloe. Even though his heart condition is worsening, he sends her to find out what is happening.

Eli continues exploring the ship remotely with a kino, and finds a door that is jammed in a half-open position. MSgt. Greer and Dr. Franklin, a civilian scientist, locate the door and are unable to close it. Inside is an exterior shuttle with broken windows. As in the observation dome, an energy shield is at less than full power and unable to prevent air from escaping. It's a major air leak that, if they can seal it, will at least buy them a day to try and fix the CO2 scrubbers. Franklin tries, but can't shut the door. Rush climbs into the vessel. He closes the hatch from its control panel – but when he attempts to exit, the hatch opens again.

Someone will have to close the hatch from the inside.

Dr. Rush examines a list of personnel on the ship, noting the injured. As he considers who might have to be sacrificed (based on those he deems least important in the skills they possess), T.J. and Chloe individually update Colonel Young and the Senator. Learning there is only an hour of air remaining, both men understand what must be done. Young, who can now move his legs, orders Scott to take him to the shuttle. He won't order anyone to sacrifice themselves, but he is willing to do it himself. Scott refuses.

Before Young can do more, the Senator goes missing. As Scott and Chloe race to locate him, Greer reveals the Senator is at the shuttle ... with a gun. With Franklin still unable to close the hatch, Greer allows the Senator to enter.

As Chloe arrives, her father seals the hatch, sacrificing himself. Distraught, Chloe turns her anguish on Rush, physically assaulting him. Rush commends the sacrifice which has garnered them time to solve the rising carbon dioxide problem. Without a word, Chloe brushes past him. Finding her in the observation room, Scott offers her what comfort he can by asking about the man who just died so that he could live.

Focused on their survival, Rush diverts Eli's own grieving by sharing what he has learned. The ship is named Destiny. The Ancients built and dispatched her from Earth unmanned, intending to board by Stargate. But they probably ascended before carrying out their plan, leaving the ship continuing along its pre-programmed course for eons.

An alarm sounds. Leaping up, Rush, Eli, Brody and Park run to the Gate Room. Young has informed Wray and others about the Senator's sacrifice. Riley thinks he has found Earth's address in the ship's database, so Young orders him to dial the Stargate. Rush explains there isn't enough power to sustain a wormhole to Earth.

Suddenly, the ship powers down and the Stargate dials on its own. A countdown clock begins. The ship is on autopilot, but Rush believes he has communicated their problem to it. Destiny has located a planet where they will find what they need to repair the CO2 scrubbers. They send Eli's kino through the wormhole to determine the planet's habitability.

Lt. Scott commands the away team of Eli, Franklin, Palmer (a geologist), a Marine and Dr. Rush himself. According to the countdown clock, they have less than 12 hours before Destiny resumes her pre-programmed mission, with or without them. They head out through the Stargate, with Rush casting a glance back at Colonel Young before he goes through.