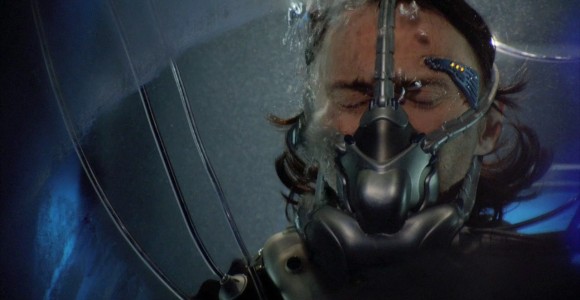 A mishap with the communication stones sends Colonel Young's consciousness to an alien vessel, provoking the crew's first extra-terrestrial encounter.

The loss of Dr. Nicholas Rush ("Justice") reverberates through Destiny. Colonel Everett Young, who beat Rush unconscious and abandoned him on the planet's surface, has flashbacks. Some civilian scientists on the ship suspect his story and wonder if they, too, will suffer Rush's fate should they challenge Young. Others, such as Camille Wray, are increasingly suspicious of Young. Wray threatens that she plans to share her concerns with the I.O.A. leadership when she next uses the communication stones to report to Earth. But first, Young will use the long-distance, body-trading technology to report to Homeworld Command.

As Dr. Caine (filling in for the still-injured Sgt. Riley) prepares the stones, Lieutenants Tamara Johansen and Vanessa James drop by Eli's room. They want him to check for water pressure problems. Seeing Dr. Caine on a live video feed on Eli's console, James confesses her crush on him ... unaware that there is also an open com channel for him to hear her. With the kino ready to record the event, and Lt. Matthew Scott and MSgt. Ronald Greer standing by to welcome the temporary visitor from Earth in the Colonel's body, Young places a stone on the communication pad.

To his surprise, Young finds himself not in the body of someone back on Earth, but with a very alien life form on an strange space ship. On Destiny, a confused alien in Young's body attacks Lt. Scott. As Greer subdues whoever is in Young's body, Caine removes the stone from the transmitter and severs the connection. Certain he did not imagine the experience, Young won't allow anyone else to use the stones until they understand what has happened.

Meanwhile, the hydroponics lab has produced tomatoes. Chloe enthusiastically pops one into her mouth. Its taste is far from tomato-y. Still, she finds hope in the promise of strawberries. Her table companion, Eli, is cranky because he is struggling to learn all that Rush knew about Destiny. Others in the mess are worried about what Young might have done to Rush. And later, in the hydroponics lab, a hidden kino records Wray, Dale Volker, Lisa Park, Adam Brody, and others discussing what to do about Young and military authority. Observing the video feed, Eli feels further burdened.

Destiny drops into normal space, orbiting a planet with purple vegetation and breathable air. Brody warns of possible radiation problems. As Young and Scott go to suit up, Lt. James finds them in a corridor and leads them to a window – where they see an alien ship staring them down.

In the control room, Eli calls up schematics as Young and Scott arrive. Even as he authorizes Eli to broadcast a message, Young feels this is more than coincidence – two alien encounters in one day. That they found Destiny so quickly suggests Destiny was already under alien observation. The aliens answer Eli's friendly greeting with a single word – in English: SURRENDER. Colonel Young orders Scott and Greer to the shuttle and the weapons brought online. Despite orders to report to designated safe areas, many civilian gather on the observation deck to look at the visitors.

The alien vessel launches several smaller ships. Because Rush was still testing Destiny's weapons system, only 30 percent can be used at one time. Eli tries to work around the problem and a way to bring the forward battery to bear. Outside the ship the shuttle engages and successfully destroys several enemy ships, but others slip past and continue toward Destiny's hull. Brody tries to boost power to the shields, but weapons fire is draining Destiny's limited power.

Realizing the danger, James hurriedly evacuates those still in the observation room. Alien weapons fire creates power surges and electrical arcs through the ship's corridors. One ship attaches to the hull and cuts a round hole, giving them access to a corridor. Chloe emerges from her quarters and investigates, and is taken captive. Once the small ship returns, the enemy begins to retreat. Colonel Young learns that Chloe has been abducted, and orders a ceasefire.

Once the shuttle is back on board, Young, Greer, and Scott proceed to the communications room. Young uses the stone to again swap bodies with an alien (having his own body strapped to a chair). He beings searching the alien ship for Chloe, but instead discovers Nicholas Rush held in a water-filled tank. He's unconscious, fitted with a breathing apparatus. Young finds a metal pole and smashes the glass, freeing Rush. When the alien before him makes a human gesture, Rush suspects Young has swapped bodies. He shows the alien how to communicate using its own mind-reading technology, with Rush now on the receiving end of the transmitter.

Confirming that it is Colonel Young's mind inside the alien body, Rush learns about the attack on Destiny and Chloe's capture. Young falls to the ground screaming in pain from the experience, and the alien returns to its body. Rush strangles it to death. He then manages to locate and free Chloe, who is also in a water-filled containment tank.

The enemy vessel attacks Destiny again. Young attempts to reestablish the stone's connection, but the stone won't send him back – the receiving alien host is now dead. He tells no one he located Rush. Instead, he instructs Eli to fire everything at the alien ship. As Young heads for the control room, Lt. Scott goes to the shuttle. Acting against orders, Scott intends to rescue Chloe. Greer decides to join him.

Destiny continues to fire, although her shields are failing. The enemy retreats and jumps to hyperspace. Scott and Greer notice one small ship flying toward them. When it lands, Rush and Chloe emerge.

Explaining his adventure, Rush does not sell out Young by contradicting his story about Rush having been caught in a rock slide. In private, Rush does confront Young. The Colonel tells him that he regrets what he did (though he thinks Rush did deserve it). Each man has damning information on the other – Rush framed Young for murder, Young left Rush behind on the planet on purpose. For the sake of the crew, they agree to an uneasy truce.

For the moment, everything returns to normal as people recover from the experience. Rush meets Wray in the hydroponics lab. Their conversation suggests she knew Rush removed Spencer's suicide weapon and planted it in Young's room ("Justice"). Wray believes that the next time they try to remove Young from command, they will be better prepared.