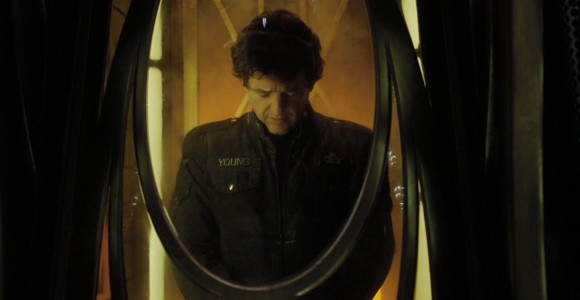 Cut off from every star and every planet in their path, the crew takes a stand against the drone command ships. Meanwhile, Eli comes up with an extreme plan to escape drone space for good.

Lt. Tamara Johansen removes the bandages from a hopeful Lisa Park's eyes ("Blockade"). As MSgt. Ronald Greer and Colonel Everett Young watch, Park tries to see, but she's still blind. When she starts sobbing, Young steps out of the Infirmary.

Meeting Camille Wray in the corridor, the Colonel acknowledges her observation about his needing some sleep. Before he can rest however, he is summoned to the Control Interface Room where Eli Wallace and Dr. Nicholas Rush share some bad news. They have isolated the sub-space link the command ships use to communicate with the drones, which allowed them to plot the locations of drones and command ships along Destiny's path. The enemy ships have blockaded every Stargate. There is no way to refuel or resupply safely. 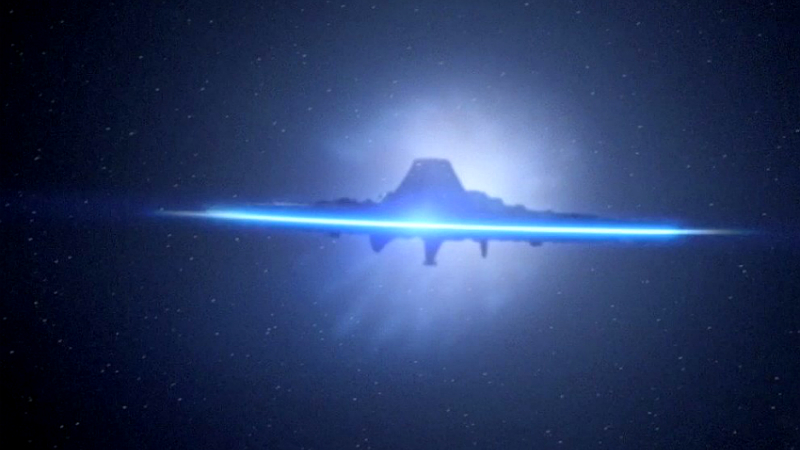 Via the communication stones Rush and Young meet with Colonel David Telford at the Pentagon back home on Earth. Destiny has a month's worth of supplies, and not much more power. Although Richard Woolsey has continued to negotiate with the Langarans ("Seizure") for the use of their Stargate, there is currently no way Earth can provide a supply line. Destiny is on its own.

After a brainstorming session, Rush, Eli, Adam Brody, and Dale Volker concoct a plan for the crew's survival. While in battle Destiny's shields cycle through numerous random frequencies to protect the ship from a variety of energy-based assaults. By tuning the shields to block only the energy signature used by the drones, they may be able to fend off the drones long enough to use Destiny's weapons to destroy the command ship.

The crew executes the aggressive plan, which is mostly successful. Although the command ship is destroyed, drones still inflict significant damage by simply crashing into Destiny. 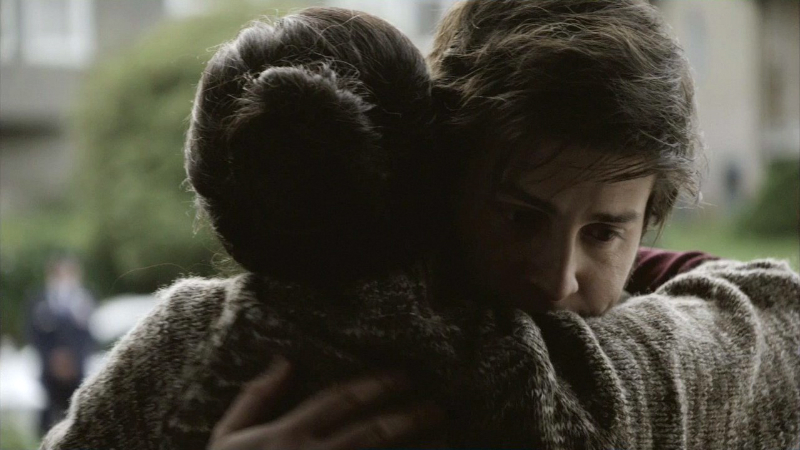 Once the shuttle returns with the few available supplies and Destiny is safely back in F.T.L. flight, Young heads to his cabin for sleep. On the way, though, Eli approaches him with an idea. Destiny is only a third of the way through this particular galaxy. Using continuous F.T.L. flight, it will take three years to traverse the remainder as well as the expanse of emptiness before reaching the next galaxy on their path. If the crew uses the stasis pods ("The Hunt"), Eli suggests, they wouldn't need to consume any resources. Power levels would be sufficient to see them into the next galaxy -- far out of reach of the automated enemy ships. Rush points out that if anything goes wrong, Destiny would eventually run out of power and simply drift. The three years could become a thousand.

Young approves the desperate plan, giving the skeptical Dr. Rush 24 hours to come up with a better solution. Meanwhile, Camille insists that everyone on the ship be allowed to use the communications stones to say goodbye to loved ones on Earth.

As the first group (which includes Varro) enters the stasis pods, Eli visits his mother back home. She is content with whatever happens. Despite the struggles, she knows Eli is happy being on Destiny. He realizes that he really has found his place.

This time when Young tries to sleep, Volker interrupts with the news that they are eight pods short. And without palladium hydride, the pods cannot be fixed. But the plan requires that life support on the ship be disabled; eight people will have to kill themselves so they don't consume the power that Destiny needs to reach the next galaxy. 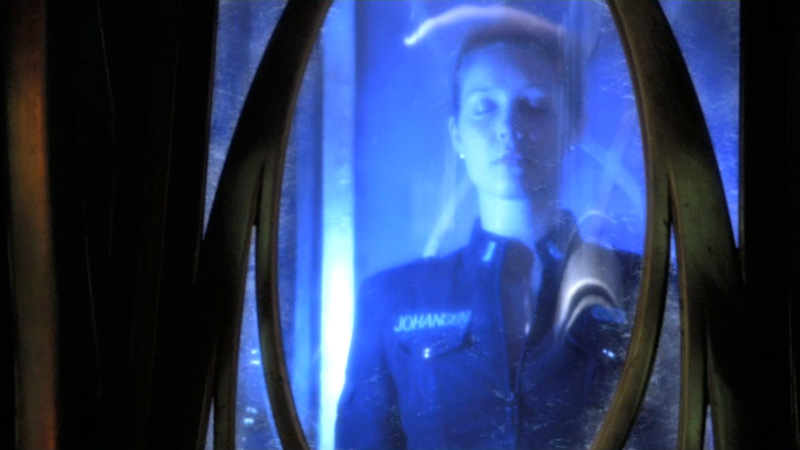 While Lisa is telling Greer that he must not volunteer to be one of the eight, she has an idea. Greer guides her to the Bridge. Using a shuttle whose shields tune out drone-based attacks, they could lure a command ship away from the planet that has the palladium hydride they need to fix the damaged stasis units. And if the shuttle engines are rigged to overload, they could destroy another command ship in the process.

Colonel Young approves the plan and the shuttle is soon launched. When the drones and command ship respond as predicted, an away team uses the Stargate. While they gather the palladium hydride, Rush and Eli remotely pilot the shuttle, successfully destroying the command ship.

Once back in the safety of F.T.L. flight, Lt. Matthew Scott debates whether to return to Earth to see the son who doesn't know him as a father ("Life"). Wray has just returned from her home visit -- but because of the suddenness, her partner Sharon was away at a conference in Brussels. They could only talk by phone.

With everyone else now in their pods, Young, Rush, Eli, Scott, Greer, Park, T.J., and Chloe Armstrong share a final meal of their store of perishables. Most enter the pods. Only Rush, Eli, and Young are left. Young makes his final visit to Earth, where his friend Telford reassures him that they will be there waiting when the crew awakens from stasis in three years' time. 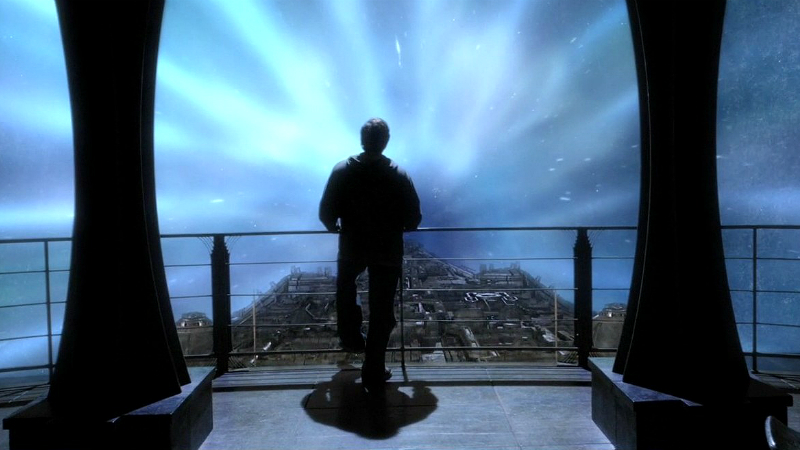 Returning to Destiny, Young is confronted with one final problem: one of the eight pods could not be repaired. Someone will have to remain conscious and try to fix the pod. If he is successful he can enter stasis with the others; if not, it is a death sentence. Rush volunteers, while Young himself is determined to remain behind. But Eli volunteers and is finally chosen: Young has no chance of fixing the pod, and as a scientist Eli feels it is time that he stepped out of Rush's shadow. He feels up to the challenge. Rush and Young enter the last pods and fall into a deep slumber.

Just as the power came on room by room when they first boarded Destiny two years ago, so now the power goes off, room by room. Eli stands alone on the Observation Deck watching the stars stream by. He is content with his personal journey ... but perhaps less than certain he will be able to repair the last pod.

Meanwhile the ship flies ever onward, pursuing her own Destiny.