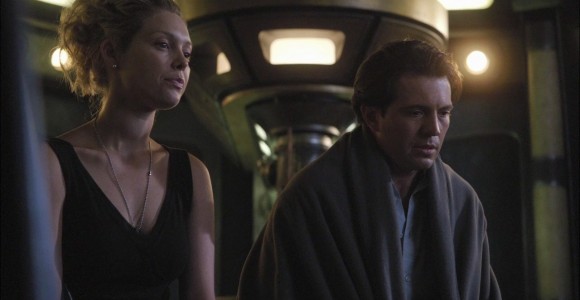 Members of the crew left behind in another galaxy make a shocking return to Destiny, while Chloe deals with the inevitable consequences of her transformation.

Destiny drops out of F.T.L. flight, and Dr. Dale Volker informs Col. Everett Young that several planets are within range of the ship. Suddenly, both notice a small ship that looks like one of Destiny's own shuttles. It matches Destiny's speed, and they hear a transmission from a man identifying himself as Robert Caine – one of their former crew who was left behind to start a colony on a distant alien world several months ago ("Faith"). He has no idea how the once-crippled shuttle is now space-worthy. Nor does he know how they found Destiny in another galaxy. Cautious, Young allows the shuttle to dock. 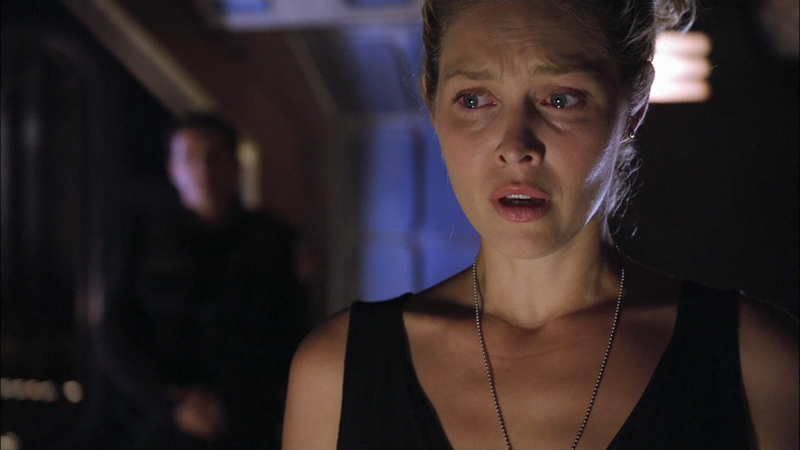 Lt. Tamara Johansen, convinced that her infant daughter was rescued by powerful aliens watching over Caine's planet ("Intervention"), meets the shuttle in hopeful expectation that the child will be on board. Young cautions her that no one mentioned a baby over the radio. And indeed, as the settlers disembark T.J. learns that none of them has any knowledge of her baby being brought to them.

Using a kino, Camille Wray, Eli Wallace, and Young question Caine. His last memories are of sheltering from the cold inside the shuttle and going to sleep. Everyone on the shuttle is surprised to have been returned to Destiny. Young orders medical exams; meanwhile he and Eli join Brody, Volker, Rush and Lt. Matthew Scott as they comb over the shuttle. It has been completely restored, as if it were brand new.

When T.J. finds nothing medically amiss with the returnees, Young permits the group to return to their old quarters. Nonetheless, he and T.J. feel there is something off about them. On the Observation Deck, Ronald Greer expresses the same misgiving to Lisa Park. Wray also shares that feeling after she conducts interviews with Peter and the others. None of them recalls anything about life on the planet.

Unwilling to accept that Destiny got into her head and made her imagine a positive fate for her baby, T.J. shows Caine around the ship, including their new hydroponics lab ("Trial and Error") and questions him further – but he has no recollection of her baby. 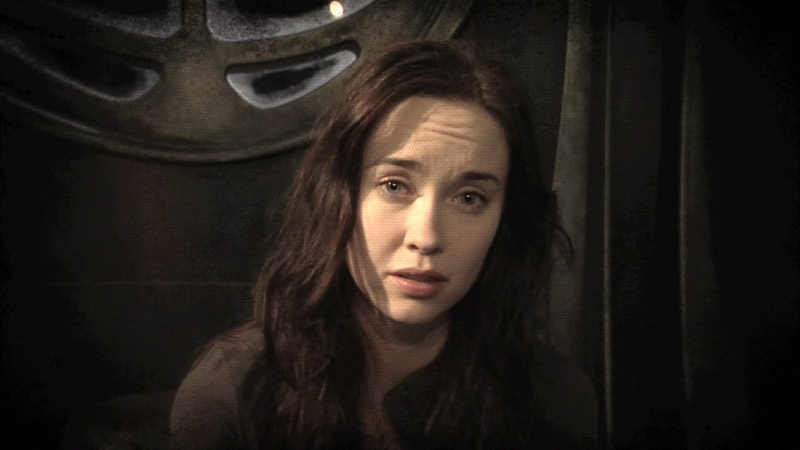 Pleased that there is news to share, Scott visits Chloe Armstrong, who is being kept in isolation in her quarters. She is touched that he tries to keep up the semblance of their relationship. As she reveals a new patch of her transfigured skin, she knows he is pretending not to be upset. Unsure how long she will be herself, Chloe enlists Eli's help to record goodbye messages. Trying to tell Eli what his friendship has meant to her, she lapses into a blackout.

When Scott next goes to see Chloe, Greer stops him. Understanding why Scott visits, Greer cautions him that she is becoming the enemy. No one knows when she will turn on them. Scott refuses to stop offering Chloe what comfort he can in the time they have left together.

Interested in learning about Destiny's newly-discovered mission, Caine seeks out Rush. Rush is searching the shuttle's navigation records, trying to discover how it found Destiny – but there is no information to be found. Caine attributes their return to a higher power – the advanced, but as yet unseen, alien race that created the impossible planet on which they settled. Rush is puzzled that the higher power could restore the shuttle, but yet would leave the people with amnesia.

On the Observation Deck, Eli finds Val, another of the returnees, sitting alone. He asks about the planet – which the settlers had named "Eden." As she recounts small flashes of memory, her nose begins to bleed. Clutching her head, she falls to the floor; T.J. soon pronounces her dead from what appears to be severe head trauma. 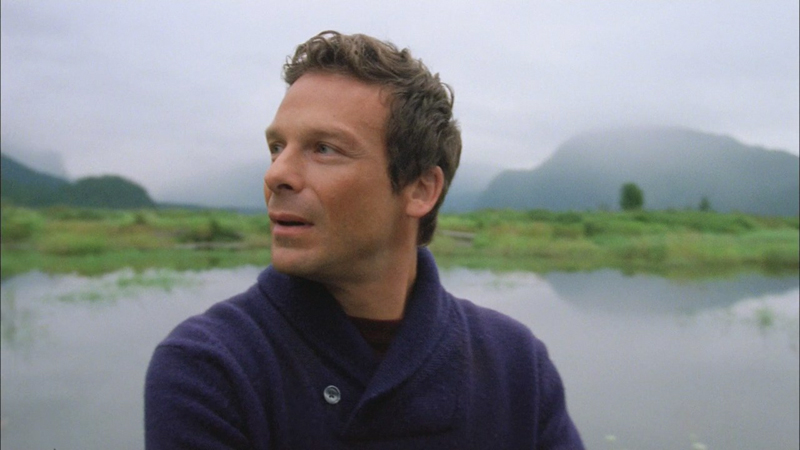 Wray proposes hypnosis to access the settlers' repressed memories. Starting with Peter, she takes him back to an autumn day on the planet. He and Val have become lovers. In another memory, he recalls chopping down a tree which falls on Val, accidentally killing her. The memory triggers a seizure, and by the time help arrives Peter is dead – of dehydration and hypothermia, of all things.

The returnees seem to be dying in the order they originally died on Eden. They are all ordered to report to the Infirmary. When Rachel doesn't appear, Scott and Greer find her huddled in a blanket, freezing. Scott carries her to the Infirmary, where she too dies. Young asks Wray to hypnotize Caine next.

Scott tries to update Chloe on what is happening, but this time she sends him away. Earlier, Greer suggested to Chloe that she distance herself from Matt, in order to protect him from what very likely lies ahead for her. Continuing her kino goodbyes, Chloe tells Scott how much she loves him, how she wanted a family with him. Now, motivated by that love, she pushes him away.

Greer visited her to seek forgiveness. He and Chloe both know that when she does become their enemy, it will be Greer who has to deal with her. She forgives him for whatever it is that he will have to do.

While T.J. tries unsuccessfully to save the returnees, Caine speaks to her of their final days. Huddled in the shuttle even after it lost power, they had candles and some food. But they were slowly freezing to death under the planet's harsh winter conditions. He was the last alive. And now he recalls that he is dead. 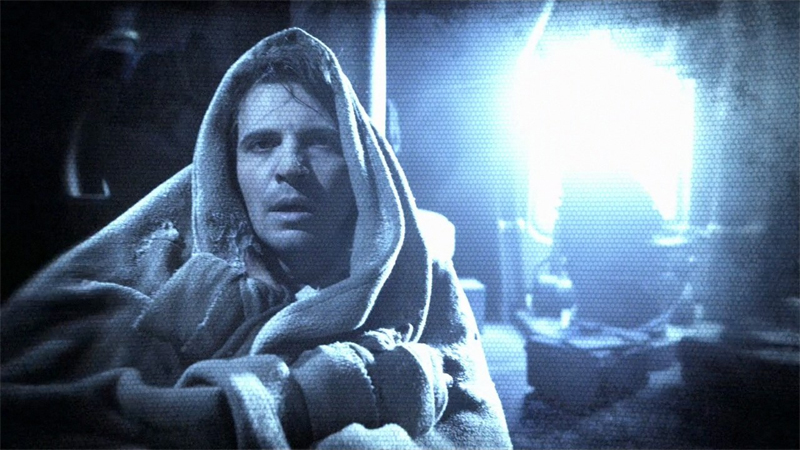 With little time left, Caine asks T.J. to join him on the Observation Deck. Staring out at the stars, he realizes his soul has already moved on. Apparently this powerful alien race can rebuild a man's body, just like they rebuilt the shuttle ... but not a man's soul. Thanking her for her kindness, he encourages her to live, to fulfill Destiny's mission, and to have faith in the others.

Wray, Rush, Young, and Eli watch footage from a kino Lt. James found inside the shuttle. On the recording they see a dying Caine asking for help. A bright light envelopes the shuttle – but too late for the people huddled inside, it seems. The kino goes blank, leaving them with no answers.