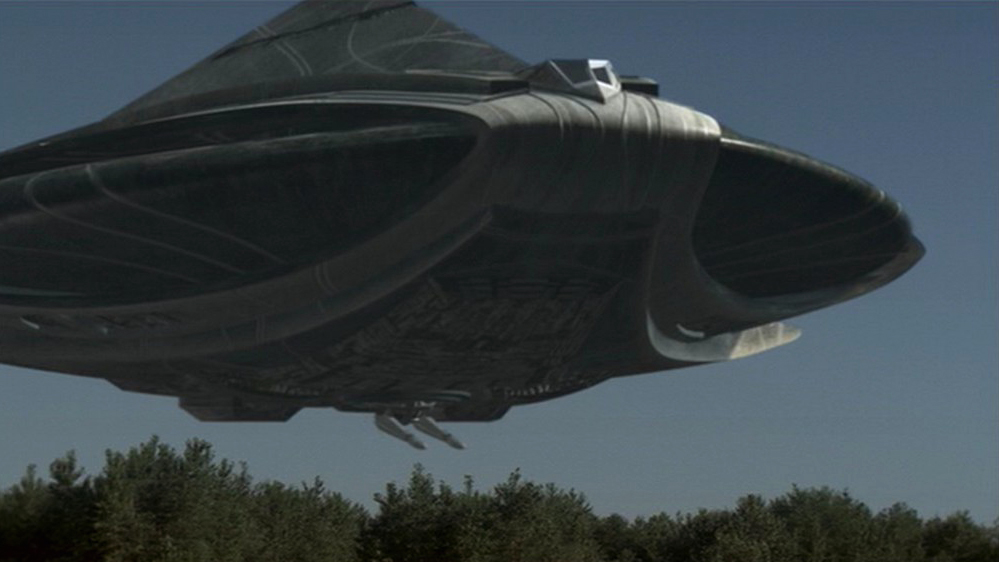 A Goa'uld mid-range bomber. The mid-sized Al'kesh is maneuverable, heavily-armed, and capable of firing enormous blasts of plasma energy. It may be used for combat in space, but is also capable of entering and maneuvering within a planet's atmosphere.

The Al'kesh's primary weapon is a double gun turret, located on the ventral side of the ship.

Exodus - SG-1's new Goa'uld mothership is attacked by an Al'kesh, which O'Neill and Teal'c then shoot down over Vorash with a death glider.
48 Hours - Teal'c fires a hand-held death glider cannon at the cockpit of an Al'kesh piloted by Tanith, presumably killing him.
The Other Guys - A trio of S.G.C. scientists witness an Al'kesh attack and capture SG-1.
Avenger 2.0 - O'Neill and Teal'c commandeer an Al'kesh on P3C-249 and use it to rescue Carter and Felger on P5S-117, then returning the trophy to Earth.
Grace - Carter reports that the hyperdrive used to power the Prometheus' trip home was taken from a Goa'uld Al'kesh.
Death Knell - Anubis's Al'kesh bombard Earth's new Alpha Site prior to its destruction, leaving the Stargate face down on the ground.
Lost City, Part 1 - Al'kesh bombard P3X-439 in hopes of eliminating the Tau'ri personnel and clearing the way for Anubis.
Lost City, Part 2 - Numerous Al'kesh from Anubis's invasion force enter the atmosphere of Earth and approach SG-1 hovering over Antarctica, only to face off against Prometheus and F-302 interceptors.
Endgame - Rogue agents working for the Trust locate Osiris's abandon ship cloaked in Earth's orbit -- an Al'kesh.
Stronghold - Bra'tac takes an Al'kesh to provide aerial defense for SG units who hope to extract Teal'c from Baal's clutches.