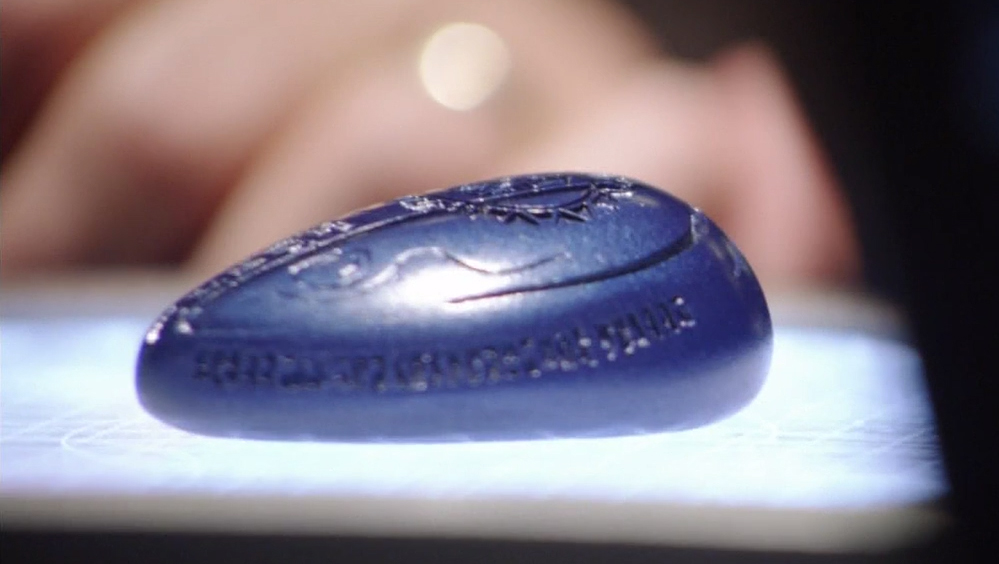 Device of Ancient design allowing two individuals communication and sight through the other's eyes -- effectively trading the conscious minds of the two linked people. When interfaced with a long-range communication device (such as an Ancient terminal or a human-built pad) the stones allow the user to take direct control over the body of another being, but without infringing on their privacy by directly accessing memories.

SG-1 first retrieved two of the stones from P3R-233, the same planet where the quantum mirror was discovered. It was several years, however, before they knew what the stones are or how they operate. The same technology was also found in the Pegasus Galaxy, and is in regular use on board the Destiny to communicate with Homeworld Command and loved ones back on Earth.

This trading of bodies is not limited to those with human (Ancient-like) physiology. On several occasions a connection has been made between Destiny personnel and a member of a hostile alien species. It appears that a stone usually requires a base terminal to operate, but can also be activated independently by those who possess the rare Ancient gene (such as Joe Spencer).

The technology has at least two limitations: the link is temporarily severed whenever the Destiny goes in and out of F.T.L. speeds, and some users experience dreams of their host's past experiences hours after the connection is broken. This may be limited only to those who have been previously subject to brainwashing techniques (such as David Telford).

Citizen Joe - An Indiana barber picks up an odd-shaped stone at a yard sale and begins to see visions of SG-1 saving the Earth from galactic threats.
Avalon, Part 2 - Upon discovery of the long-range communication device Dr. Jackson makes the connection that they can be used in conjunction with the Ancient communication stones.
Origin - Still connected through the stones, Daniel and Vala encounter an entirely new threat in a distant galaxy.
Identity - The team learns that Jennifer Keller touched a communication stone in Janus's secret lab, causing her to later trade bodies with Neeva Casol.
Air, Part 2 - Nicholas Rush uses a communication stone to return his mind home after arriving on the Destiny, and briefs General O'Neill on the situation.
Air, Part 3 - Colonels Young and Telford use the stones to trade places, Young meeting with General O'Neill on Earth and Telford examining the Destiny. Chloe Armstrong also returns home to speak with her mother.
Darkness - Colonel Young uses a stone to report back to Earth, and to visit his estranged wife in the hopes of reconciling.
Earth - Young, Wray, Eli and Chloe visit Earth with the stones, while Colonel Telford uses the body trade to take command of the Destiny and enact a dangerous rescue plan.
Life - Wray and Scott return home to visit their loved ones using the stones.
Space - Young inadvertently trades bodies with an alien while trying to report to Earth, and later takes advantage of the connection to find his abducted people.
Divided - The crew use the stones to bring a surgeon, Dr. Brightman, on board in Chloe's body in order to remove an alien tracking device from Rush's chest.
Sabotage - A brilliant scientist from Earth, Amanda Perry, spends several weeks on Destiny in the body of Camille Wray, who in turn visits home in Perry's quadriplegic body.
Pathogen - Eli uses the stones to visit his ailing mother on Earth, while Camille returns home to Sharon once again.
The Greater Good - Amanda Perry uses a stone to return to Destiny and is presumed dead when Simeon kills her host body, Ginn.
Alliances - Camille and Greer visit Earth with the stones and must disarm a Lucian Alliance bomb.
Seizure - Colonel Young's crew use a communication stone as a Trojan horse to take over the body of a Kelownan in order to make use of the naquadria-rich planet's Stargate.