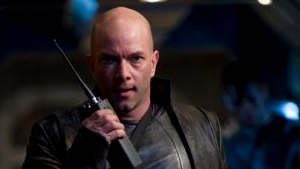 Member of the Lucian Alliance, a criminal organization based in the Milky Way Galaxy. Varro was on the team that infiltrated the Ancient ship Destiny under the command of Kiva.

Dannic was a brutal, violent man. When Kiva was gravely wounded by David Telford, he seized control of the Alliance forces and ordered the execution of all of the Earth crew's military personnel -- only to be briefly placated by Varro, who convinced him to put the crew off the ship instead.

When Nicholas Rush dialed down the strength of the ship's shield and threatened to expose the Alliance to deadly radiation, Dannic refused to surrender. Clearly insane, threatening his own people and preferring to die rather than surrender, Dannic was shot dead by an Alliance scientist, Ginn, ending the stand-off.

Subversion - Dannic observes Kiva's manipulation of Rush at their base, forcing him to dial the Stargate to Destiny.
Incursion, Part 1 - Dannic is among the soldiers who infiltrate Destiny under Kiva's command.
Incursion, Part 2 - When Kiva is wounded, Dannic takes control of the situation and orders Young and his soldiers executed.
Intervention - Dannic formally takes command after Kiva dies on the operating table, putting Young and the rest of the military off Destiny. When it becomes clear that his bloodlust and insanity will result in the death of himself and his people, Ginn shoots him dead.