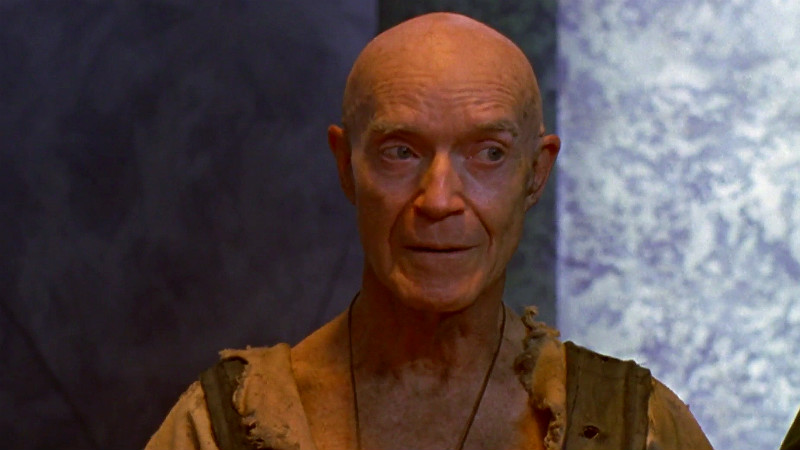 A scientist and engineer who worked with Professor Langford to try to unlock the secrets of the Stargate in 1945, Dr. Ernest Littlefield was the first man to travel through Earth's gate since the ancient Eyptians buried it. Littlefield realized that the glyphs on the Stargate made up destinations. He was also courting the professor's daughter, Catherine Langford, and was prepared to ask him for her hand in marriage.

Unfortunately, he was unable to do so. When the research team stumbled upon a valid gate address and activated a wormhole, Littlefield accepted a mission to step through. Believing the event horizon to be water, he dressed in a deep-sea diver's suit and given an air hose. When the gate deactivated, the hose was cut and Dr. Littlefield was believed to have perished. Dr. Langford informed his grief-stricken daughter that he perished in a lab accident.

Ernest was trapped on the deserted world for more than 50 years. There he had hallucinations of a life with Catherine as he discovered the mysteries of the world he gated to. Nicknaming the planet "Heliopolis," Ernest discovered that it had once been a meeting place for four advanced alien races and also contained a device that held a massive amount of information. He translated much of the inscriptions, documenting everything, while putting up with a vicious weather pattern year after year.

When records of the accident in 1945 were uncovered by Dr. Daniel Jackson, Catherine was summoned to go through the gate with SG-1 to the world where Ernest had gone. They found him there, a frail and naked old man -- bitter about Earth never having sent anyone after him. He taught Daniel what he knew about the alien meeting place, and returned to Earth in the nick of time before the Stargate fell into the ocean in a terrible storm.

Ernest has been reunited with Catherine, and the two are living out their life together in peace.

The Torment of Tantalus - Earnest Littlefield is found still alive on an alien world, possessing extraordinary knowledge regarding four ancient races of the galaxy. SG-1 and Catherine help him to return home, where he and Catherine live happily ever after.