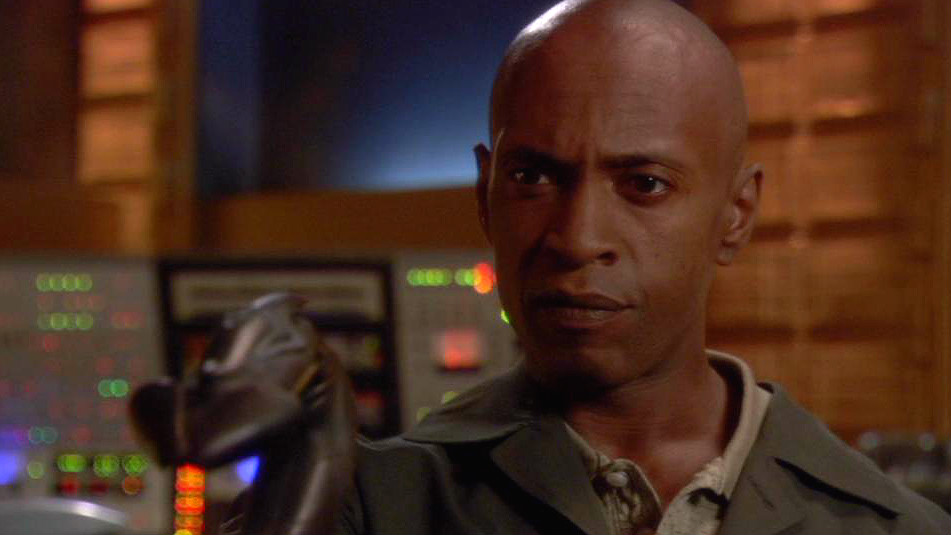 An agent of the Trust, leader of a cell formerly aligned with a rogue branch of the N.I.D. Hoskins phoned Dr. Daniel Jackson at Stargate Command and informed him that he had information which confirmed Teal'c's innocence in a killing. He eventually captured Daniel and held him at gunpoint in order to force him to translate a block of Ancient text into Goa'uld symbols.

The information enabled Hoskins and his people to (including Brooks and Jennings) to remotely access Osiris's ship -- an Al'kesh that had been left cloaked above Earth after she was captured. They beamed aboard using the vessel's enhanced Asgard transporter technology. Some weeks later the rogue team used an operative inside the S.G.C. to tag the Stargate with a locator beacon, and stole the gate with the transporter.

SG-1 caught up with Hoskins and the others after they took the gate and used it on board their ship to launch rockets with payloads of deadly symbiote poison at target worlds -- including many with Jaffa rebels and Tok'ra agents friendly to Earth. The operation was stopped, though not until many had died -- with Hoskins himself shot dead with a staff weapon blast from Teal'c.

Affinity - In order for his group to begin using Osiris's ship for their own purposes, Hoskins instructs Dr. Jackson to translate a block of Ancient text.
Endgame - Hoskins and his team steal the Stargate to attack Goa'uld worlds with symbiote poison, but he is killed when SG-1 disrupts the operation.