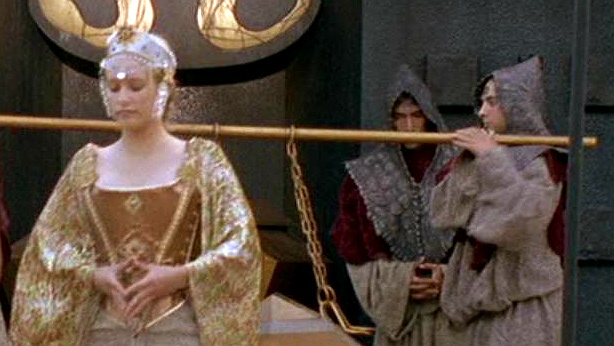 Caste of religious leaders that serve the Jaffa people on various worlds, including Chulak. The priests likely mediate worship of the Goa'uld. Among their duties is the prim'tah ceremony, when young Jaffa come of age and receive their first larval symbiote. They can also be found traveling with the warriors on board Goa'uld motherships.

A form of the Jaffa religion persisted among those who rejected the Goa'uld as false gods -- and it continued after the downfall of the System Lords and the establishment of the Free Jaffa Nation. The new Jaffa homeworld of Dakara was regarded as an ancient holy site. Thus it is likely that priests continued to play a role in Jaffa life.

Some priests bear a different symbol on their foreheads.

The priestly caste includes both males and females, though it is not clear if there is an equality in their appointment or function. Male priests are commonly recognizable by their distinct, hooded dress. Priestesses also wear distinctive dress. In some cases priests in the service of a Goa'uld will also bear a different mark branded upon their foreheads.

Children of the Gods - While traveling to the main city SG-1 encounters a group of priests on Chulak.
Bloodlines - Teal'c interrupts the priests' efforts to execute the prim'tah ceremon, giving his son Rya'c his symbiote.
Crossroads - Shau'nac, a priestess and friend of Teal'c, visits Earth with claims that she has learned to commune with her symbiote.