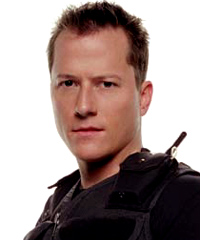 A human from Kelowna on the planet Langara, Jonas Quinn replaced Daniel Jackson on SG-1 for a year. Capable of quickly absorbing volumes of information, Jonas was a rather unlikely candidate for Jackson's replacement after his tragic death. He stood idly by as Jackson gave his life to save Kelowna from disaster, initially putting him on bad terms with Colonel Jack O'Neill and SG-1.

Convinced by O'Neill not to allow Jackson to be used as a scapegoat for the accident, Jonas stole as much naquadria as he could and defected to Earth. Wishing to make amends with O'Neill and the others for what had happened, he committed himself to reading every valuable text on the base -- especially Dr. Jackson's notes -- to prove himself worthy of joining the team.

Quinn watches in horror as Dr. Jackson saves his people. From "Meridian"

In his year of service as a member of SG-1, Jonas was always quick to make decisions in favor of the whole team, and prepared himself for every mission with a generous amount of input and an eagerness that surpassed, and often annoyed the others. He was thrilled to experience space travel for the first time, and fervently enjoyed his first trip in a death glider.

Jonas learned that he is rather unique among Kelownans when the Goa'uld Nirrti put him in a genetic manipulation device created by the Ancients. He is more evolved than the average human, and possesses keen sensory abilities including a photographic memory and acute attention to detail. Nirrti wished to turn him into a hok'taur ("advanced human") and blend with him as her new host -- but he refused, and helped overthrow her.

Nearing the end of his time with SG-1, Jonas was captured by Anubis and implanted with a device that gave the Goa'uld access to all of his memories. Anubis learned about the existence of the powerful mineral naquadria, and its location on Jonas' homeworld. Quinn's worst fears came to be: His entire mission with SG-1 had him bent on one day returning to his world to save it from the day the Goa'uld would come. Instead, he had led that very threat right to the capital city.

Jonas bids farewell to SG-1 and returns to Kelowna. From "Homecoming"

Given the chance to save a returned Daniel Jackson, much like Daniel saved him and his people before, Quinn pushed the archaeologist away to avoid a fatal staff blast, bringing their relationship full circle. After helping to save his people from Anubis, and with Daniel back with SG-1, Jonas returned to his people to help them forge a new future, beginning with a new Joint Ruling Council. The other major governments on his planet were finally willing to set aside their differences and work together, but they insisted that the experienced Quinn represent his nation. He returned not as a traitor, but a hero.

Meridian - SG-1 meets Jonas Quinn, who defects to Earth with a supply of naquadria rather than stand by while Dr. Jackson is blamed for a major laboratory accident by the Kelownan scientists and government.
Redemption, Part 1 - After three months on Earth, Jonas attempts to join SG-1 in Jackson's absence -- but is rebuffed by O'Neill and Carter.
Redemption, Part 2 - Jonas provides the S.G.C. with a solution to the impending destruction of Earth, and is granted a spot on SG-1 to prove that he has what it takes.
Descent - On his first mission, Jonas struggles with O'Neill's refusal to let him contribute -- but manages to save the rest of his team from a Goa'uld mothership on a countdown to self-destruction.
Shadow Play - Jonas returns to Kelowna with SG-1 to try and stop them from using their new naquadria bomb against their enemies, and is offered a full pardon and reinstatement. He also revisits his mentor, and learns that Dr. Kieran has a mentally degenerative condition similar to schizophrenia.
Metamorphosis - Nirrti attempts to seduce Jonas into becoming her new host after her genetic manipulation machine reveals that he has unique potential.
Prophecy - Jonas begins to have visions of the future, and resists life-saving brain surgery in the hope of saving the S.G.C.
Fallen - Jonas and Daniel sneak aboard Anubis's mothership as part of a plan to destroy its super-weapon before it can do any more harm. Jonas is captured and tortured for information by Anubis, who learns the location of Jonas' homeworld -- and about its supply of valuable naquadria.
Homecoming - Freed by Jackson, he and Jonas ring down to Kelowna to fight against a Jaffa occupation. Having helped save the planet from the Goa'uld, Jonas departs from SG-1 and returns to Kelowna as a hero.
Fallout - Jonas returns to Earth to seek aid from old colleagues after massive veins of unstable naquadria are discovered beneath his planet's crust, threatening to destroy the entire planet.