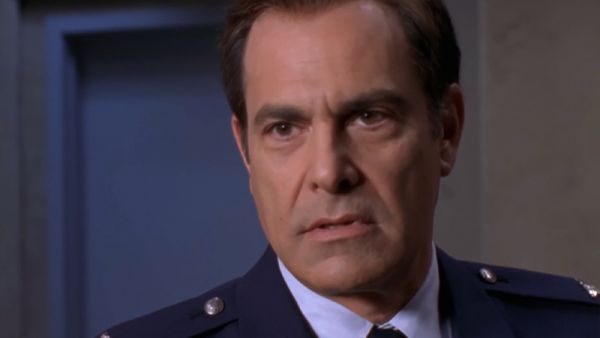 Colonel in the U.S. Air Force and an intelligence officer, who was stationed at the Pentagon during the S.G.C.'s first year of operation. Kennedy arrived to assess Teal'c and his potential to aid Earth in defeating the Goa'uld. He was dismayed to discover that Teal'c had no knowledge regarding Goa'uld ships or the technology behind the Stargate.

Kennedy tried to snatch Teal'c away from Stargate Command for scientific study, but was stopped from doing so when Teal'c was needed to prevent a Goa'ulded Major Kawalsky from escaping to Chulak. He also suggested at one point that Kawalsky might remain host to the symbiote, to allow for further study of the creature.

Colonel Kennedy was apparently a leader at the N.I.D., and following a promotion he was replaced in that role by Colonel Harold Maybourne.

PLAYED BY - Alan Rachins
FIRST APPEARED - The Enemy Within

The Enemy Within - Colonel Kennedy arrives to assess Teal'c and offer his two cents in what will be done with Kawalsky.
Enigma - Colonel Maybourne reports that Kennedy has been promoted, taking him out of the N.I.D.