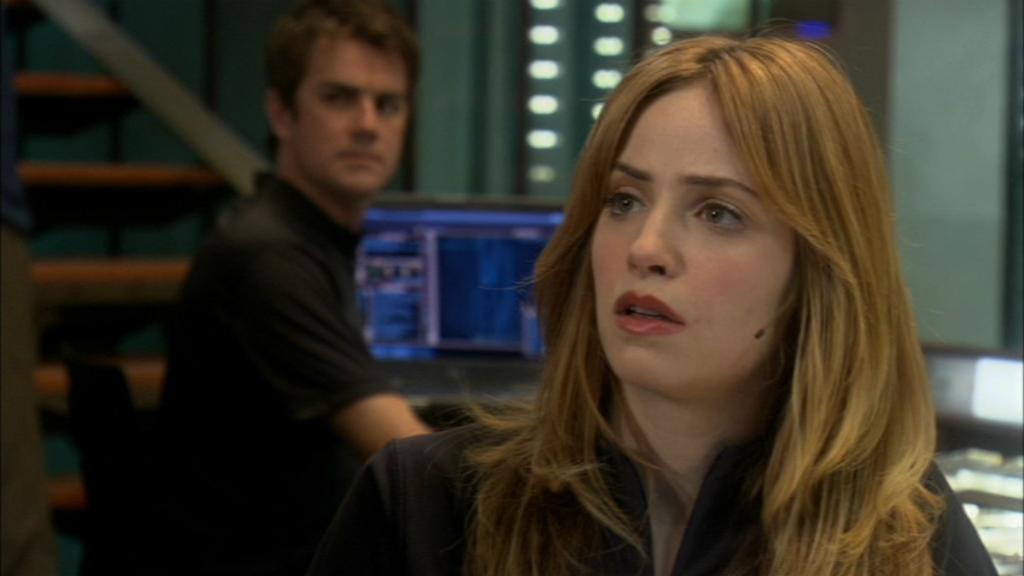 Lieutenant assigned to the Atlantis base's security detail, Laura Cadman was part of the first relief force that arrived aboard the Daedalus after the expedition reestablished contact with Earth. She is a no-nonsense, to-the-point woman, who knows what she wants and isn't afraid to seize the moment.

Cadman was helping to survey a recently culled alien world with Dr. Rodney McKay and Dr. Carson Beckett when a Wraith Dart made a low pass of the surface. She and McKay were scooped up in its culling beam. The Dart was shot down on the surface of the planet, and with Dr. Zelenka's expertise McKay was rematerialized -- with Cadman's mind sharing his body.

With Dr. Heightmeyer's help, Lieutenant Cadman discovered she could take control of his verbal and motor functions. While McKay slept she visited Dr. Beckett and invited him to Rodney's private dinner with Dr. Katie Brown, on the grounds that he needed a chaperone to prevent making a fool of himself. She also took a long jog in McKay's body before retiring to bed in her own quarters -- in the buff.

The longer that Cadman lingered inside McKay's body, the more she realized it was becoming harder to remain aware and "hang on." Eventually one of them would fade away, and since it was Rodney's body, she agreed to be the one to let go if tests with the Dart continued to fail. Fortunately Rodney discovered the solution, and Cadman was returned safely to her own body.

Duet - While on patrol with Drs. McKay and Beckett, Cadman and Rodney are taken by a Dart's culling beam and find themselves sharing his body.
Critical Mass - Cadman lends her expertise in helping to locate a bomb planted in Atlantis, and uncovers several deletions made to the command log by Colonel Caldwell.