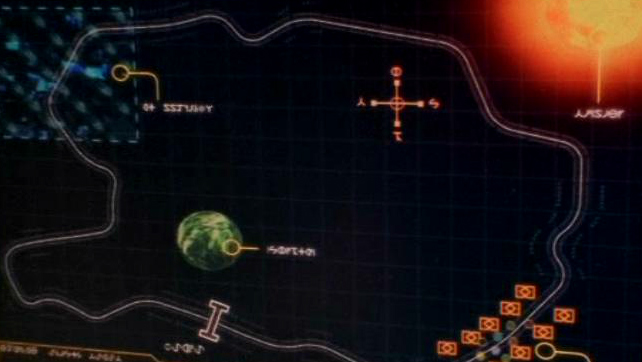 A historic and widely popular Hebridian race, taking ships through the Hebridan solar system. The race is open to anyone, and the rules are few. The winner's ship must arrive at the finish line first ... and intact. The winner is awarded a prestigious contract with Tech Con Group, a major corporate conglomerate on Hebridan.

In this stage, ships must navigate through a densely packed armada of propulsion-capable disabling drones, capable of firing bursts of plasma energy at ships. The objective is to avoid the fire of these weapons, as they severely drain the power systems of the shields. Once the shields are penetrated, a vessel can be disabled and is disqualified from the race. This first stage is very successful at weeding out many competitors from proceeding further.

This stage takes ships through the Hebridan sun's chromosphere, causing intermittent failure in communication and navigation. The sun emits deadly levels of radiation, which can be partially repelled by lowering the deflector doors of windows and other outer barriers. If a ship becomes disabled in this layer, it is not long before the gravity well of the sun causes serious navigational issues.

This stage of the race consists of billions of magnificent ice crystals, some the size of micro-fragments, and others the size of the Hebridian capital. The goal is simple -- prevent the destruction of your vessel. Easy maneuverability is a must in the stage of this course in order to avoid the gargantuan rocks that cause navigation difficulties and are quite lethal.

The last stage of the Loop is a dead sprint to the finish line. It comes down to the pilot with the most advanced and energized power source wired into his or her system to successfully reach the finish line before any other ship. As there are no rules, ships are allowed to buffet, and even fire upon, one another to achieve first place. (Advertisers suggest the use of Ion Pro especially for this stage of the race.)

La'el Montrose successfully completed the 59th Loop of Kon Garat with her vessel intact. She was awarded first place and given a contract with Tech Con Group.

Space Race - Major Carter participates in the Loop with Warrick, on board the Seberus.