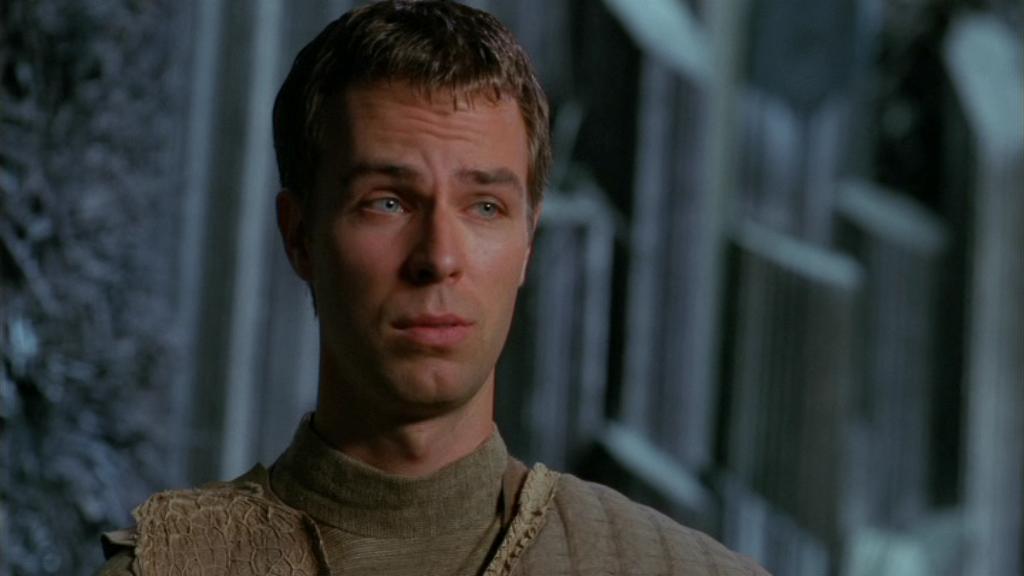 A leader in the ranks of the Tok'ra, Martouf (host to the symbiote Lantash) was the mate of Rosha (host to Jolinar). They spent over 100 years together. He was devastated when she was captured by Sokar and sent to his prison moon of Ne'tu. When she finally escaped and returned, she refused to tell him how she escaped.

Martouf is soft-spoken, level-headed and wise, and has come to the aid of the S.G.C. (or to request their help) on more than one occasion. He shares a special, personal bond with Samantha Carter, who was the last host of Jolinar before the Tok'ra was killed by a Goa'uld assassin. He saw in Samantha many of the same traits he had once seen in Rosha / Jolinar.

Martouf and Sam remained close, though Carter's inability to work through which feelings for Martouf were hers and which were remnants from Jolinar kept them at somewhat of an emotional distance.

It was Earth where he would, in fact, take his final breath. Without knowing, Martouf had been subject to Goa'uld mind control, turning him into a za'tarc. His attempt to assassinate the President of the United States ended in failure, and his friend Carter was forced to kill him. Martouf did not survive, but Lantash, in possession of all his memories, was placed in a stasis chamber by the Tok'ra.

The Tok'ra, Part 1 - SG-1 meets the Tok'ra Martouf -- a leader in the Goa'uld resistance movement. He takes an immediate liking to Carter after learning that she was the last host of his mate, Jolinar.
The Tok'ra, Part 2 - Martouf welcomes Jacob Carter as the newest member of the Tok'ra, and helps SG-1 establish an alliance with the Tok'ra.
Serpent's Song - Martouf visits the S.G.C., where Apophis lays dying, and recommends that they hand him over to Sokar to save themselves.
Jolinar's Memories - SG-1 and Martouf travel to Sokar's hellish prison moon on a dangerous mission to rescue Jacob/Selmak.
The Devil You Know - Apophis drugs Martouf to try and learn the location of the Tok'ra, giving him a vision of his former mate, Jolinar -- but Martouf overcomes it, and lies to him. Though Martouf is willing to sacrifice himself for the mission, Teal'c saves them from Ne'tu.
Divide and Conquer - Martouf joins SG-1 in preparing for the formal allying of Earth and the Tok'ra, but is killed when it is revealed that he has been brainwashed by the Goa'uld to assassinate the President of the United States.
Summit - More than a year after Martouf's death, his symbiote Lantash lives on in a Tok'ra stasis chamber -- which is destroyed in a Goa'uld attack. Lantash seeks refuge in the dying Lieutenant Elliot.
Last Stand - Unable to save himself or Elliot, Lantash dies saving SG-1 and Jacob Carter -- after telling Sam that he loved her.
Ripple Effect - When a bridge in the metaverse is formed an alternate reality Martouf arrives at Stargate Command, five years after his death.