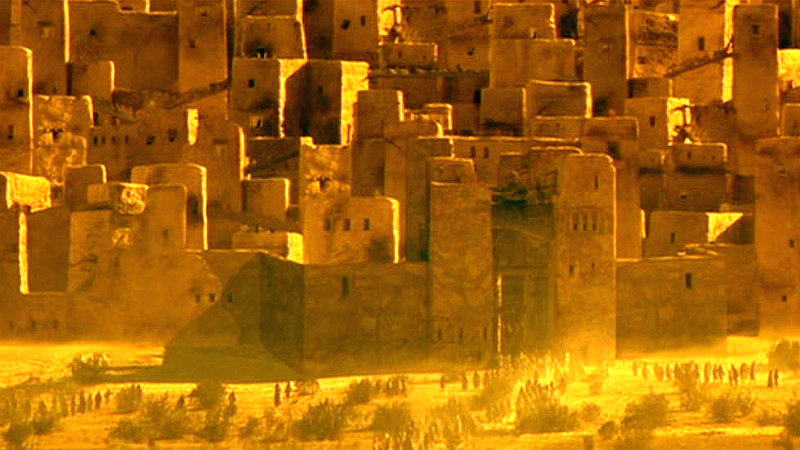 A great Abydonian city, several kilometers away from the pyramid that houses the Stargate on the planet Abydos. It shares its name with a great city in ancient Egypt on Earth. For years the Abydonians lived together in their world's city, but were free to branch out to the safety of the pyramid when Ra was destroyed, and longer used it as his landing base.

Nagada is central to a rich Abydonian culture of festive music and food. If in the event of a sand storm a guard tower will trumpet an alarm. The people then rush to bring enormous doors into place that effectively shield the population from the deadly storm. This same tower also allowed the people to see an incoming attack force of death gliders on approach when Ra ordered the people punished.

An enormous amulet of the Eye of Ra can be unconcealed for the people to worship their god. But it is likely this idol was destroyed after Ra was defeated.

The word "Nagada" is evidently tied closely to the name for the element naquadah, which is pronounced the same by the Abudonians. "Nagada" means "power," and is a fundamental concept for the culture dedicated to mining it for the Goa'uld for countless generations.

"Stargate" the Movie - The naquadah mining camp convenes for the day to bring "messengers of Ra" to Nagada for worship.
Stargate Origins - Kasuf warns Catherine Langford that they should not enter the city of Nagada, where they would face many questions.