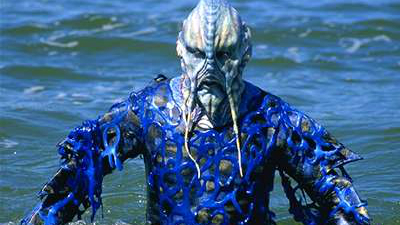 A race of amphibious beings that fought the Goa'uld during the era of the Babylonian Empire on Earth. It is unclear how many survived the fight as the Goa'uld grew in power, following their depletion in population. One known survivor of the Oannes, Nem, spent thousands of years searching for his beloved mate, Omaroca, who died at the hands of the Goa'uld Belos during the Babylonian era.

It was only after Nem captured Daniel Jackson and used his technology to search the textbooks from his early years of study that he learned her fate. As quoted by Daniel's lessons: "The god Belos came down onto Babylon, onto the place of Omaroca, and cut the woman asunder."

In physiology, Oannes are relatively similar to fish, with the ability to both breathe and process water through their gills. They are capable of emitting a potent alloy of varying intensities from their mouths, possibly as a defense mechanism.

Nem was not opposed to a formal relationship with the people of "Babylon" (Earth), but said it would not happen overnight.

Fire and Water - Daniel Jackson is taken by Nem of the Oannes in the hopes of uncovering the mystery behind the disappearance of his mate, Omaroca.