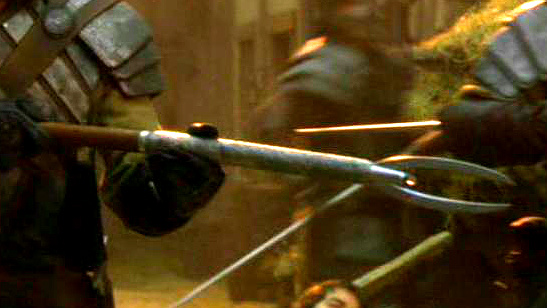 A long, fork-shaped device not dissimilar to a Jaffa staff weapon. The U-shaped particle emitter on the top fires beams of blue energy from its tip, killing with a single burst. It is powered by a single, blue crystal mounted near the head.

The staff is a standard weapon for Ori warriors.

Crusade - Tomin uses his Ori staff weapon against anti-Ori underground members Seevis and Denya, and very nearly on his wife Vala.
Line In the Sand - Ori ground forces use their weaponry to invade P9C-882, and Mitchell and Carter use the weapon's power crystal to temporarily extend a phase camouflage field from Merlin's computer.