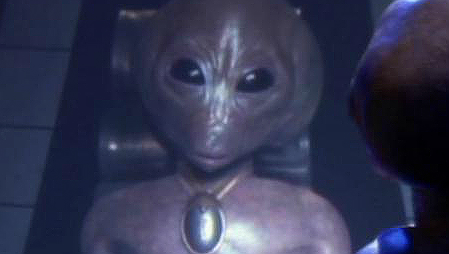 An Asgard leader and member of the High Council. Penegal reported to Thor regarding Replicator blocks that broke off from Replicator ships that had been destroyed over the new Asgard homeworld, Orilla. Though the enemy ship had been destroyed, these blocks rained down on Orilla below and threatened to gain a foothold on the last hope for the Asgard civilization.

Later, Thor reported to Penegal regarding the status of a means he was working on to counteract the Replicators. This technology eventually became the full-scale Replicator disruptors.

It is presumed that Penegal perished when the Asgard race collectively ended their civilization, unable to solve the genetic degradation problem in their reproductive cloning program.

New Order, Part 2 - Penegal fears that countless Asgard lives will be lost before they can return to the computers, informing Thor of the continuing Replicator threat.