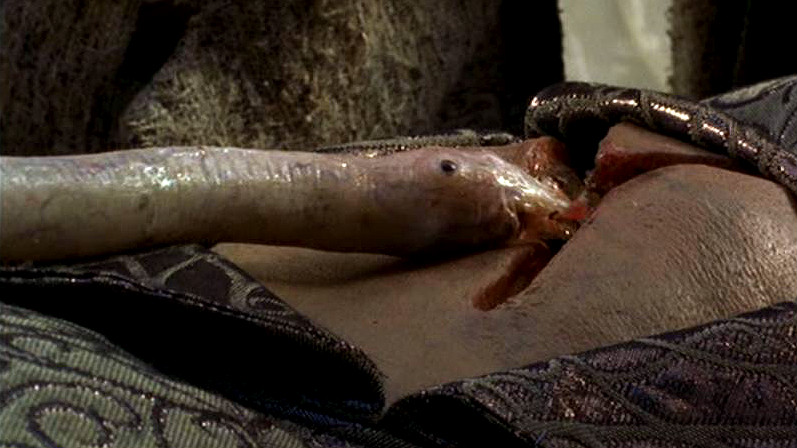 Goa'uld term for a Goa'uld symbiote in its immature, larval form.

The word "prim'tah" also refers to the ceremony in which a young Jaffa, upon reaching the Age of Prata, is implanted with his or her first larval symbiote. The ceremony us performed by a Jaffa priest, who uses a special tool to create a pouch for the symbiote in the young Jaffa's abdomen. Upon reaching this age, a Jaffa child's normal immune system begins to fail due to the Goa'uld's genetic manipulation of their race, and the child must take a symbiote in order to survive.

Bloodlines - Teal'c returns to Chulak to stop his son Rya'c's prim'tah ceremony, but arrives too late. Teal'c gives up his own symbiote to keep his son alive.
The Serpent's Lair - Apophis orders Teal'c prim'tah removed, telling his men that it is the worst death a Jaffa can know.
Crossroads - The Jaffa priestess Shau'nac's prim'tah comes to full maturity, and she tells SG-1 that she has learned to communicate with it -- something forbidden to Jaffa. Teal'c learns that his father was killed when Cronus crushed his prim'tah.
Double Jeopardy - Cronus attempts to slowly kill Teal'c by crushing his prim'tah, the same way that he killed Teal'c's father.
Birthright - The Hak'tyl resistance steals symbiotes from other Jaffa for their children, who require a symbiote upon reaching the Age of Prata.