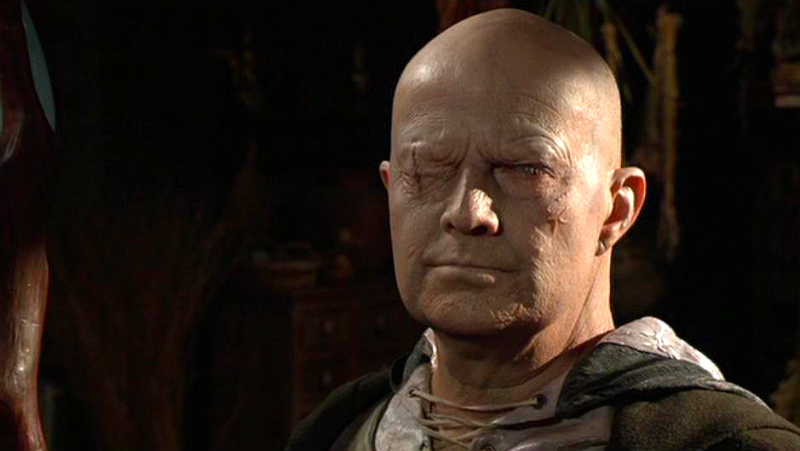 A Prior of the Ori, who served on the planet of Ver Isca before joining the first wave of Ori warships to invade the Milky Way Galaxy through the Supergate. His look is distinctive among other Priors in that he has one eye missing, the socket covered over by scar tissue.

Like the other Priors his duty is two-fold. On the one hand he performs religious duties, preaching the word of Origin and leading converted populations in Prostration. On the other he serves the Orici, Adria (whose birth he was present for), as a sort of military general.

As is the case with most Priors nothing is known about the man before he entered into the Ori's service. He is presumably a native of their home galaxy. After he was exposed to the energy of the Ark of Truth he learned the true nature of the Ori he had worshiped for so long.

Crusade - The Ver Iscan Prior prepares his people for the launch of the Ori fleet, healing Tomin while revealing that his wife Vala carries a child that is "the will of the Ori."
Flesh and Blood - The Prior arrives in the Milky Way on board an Ori warship, where Vala's child Adria is born.
The Quest, Part 1 - SG-1 avoids notice of the Prior on Osric's planet before embarking on the Quest for the Sangraal.
The Quest, Part 2 - The Prior from Ver Isca helps Adria's forces penetrate Morgan Le Fay's closed Stargate network.
Stargate: The Ark of Truth - The Prior visits Stargate Command on Earth and is confronted by Landry, who is unaware that the man heralds the arrival of a strike force of warships in orbit above.