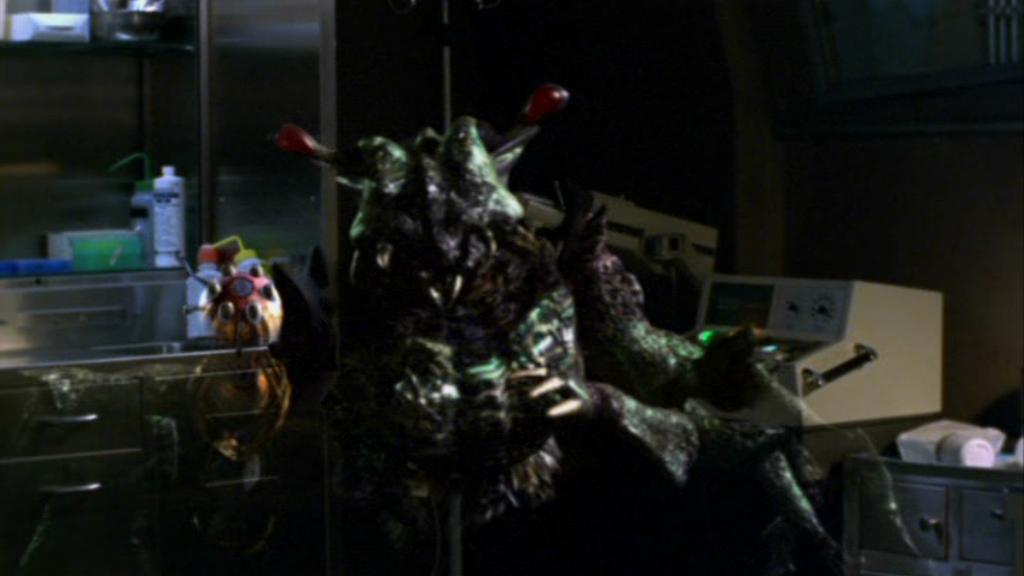 A non-humanoid race that exists 180 degrees out of phase from normal space-time, and are thus completely invisible. The species are insectoid in appearance, resembling spiders with large eyes on the sides of their head, and spiny green arms and legs, permitting them to move quickly. They have multiple legs, and adults are approximately two and a half meters tall.

When the Goa'uld discovered the peaceful Reetou, they nearly wiped them out because they saw them as a potential threat. The governing body of those that have survived sent an envoy to Earth in the form of a human boy, capable of communicating with both his Reetou "Mother" and humans. The boy, who named himself "Charlie," was sent to warn Earth about a threat from a Reetou rebel faction.

The rebels are a gathering of hundreds, perhaps thousands or more Reetou who believe the Goa'uld threat lies in their ability to take human hosts. Their goal is the extermination of all humans, in order to defeat the Goa'uld by attrition. They operate in 5-man suicide units, which infiltrate a target area (or planet) and do as much damage as they can before setting off an explosion equivalent to a small tactical nuke. Though they remain at war with the Goa'uld, the governing body of the Reetou do not condone this course of action.

The Reetou possess advanced, plasma-based energy weapons fitted onto one arm. The weapon is capable of firing a powerful blast of energy, which becomes visible once it is fired at a target. Since Reetou exist 180 degrees out of normal phase, conventional weapons can only "slow them down," if even that. Their only vulnerability lies in the T.E.R., or transphase eradication rod, several of which the Tok'ra have stolen from the Goa'uld and shared with Earth.

The Reetou rebels have only taken their plan to Earth once, but are still a force who could level entire cities if just a handful made it through the detection grid.

Show and Tell - A Reetou visits Earth to warn them that a group of Reetou rebels are planning to attack Earth in an effort to wipe out all possible Goa'uld hosts.