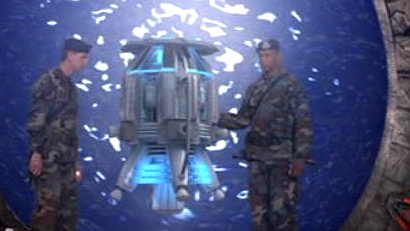 Planet-defending version of the smaller Replicator disruptor, designed to disintegrate Replicator vessels on a planetary scale. The Asgard device was compatible with human computers and could be remodulated to target Replicator ships who had made themselves immune to previous attacks by the technology. This remodulation could occur via wireless uplink while the satellite was in orbit over the base.

According to Thor, the most effective deployment would be geosynchronous orbit above the base at an altitude of 33,785 kilometers with a zero inclination.

Gemini - Thor sends a copy of the Replicator disruptor satellite to the Alpha Site to help defend the base from Fifth's assault.