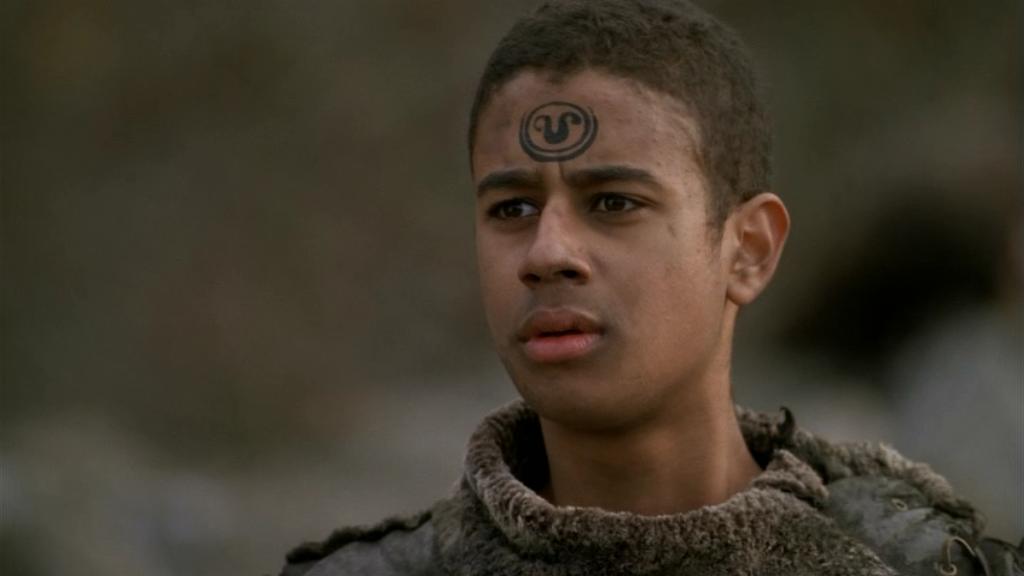 The son of Teal'c and Drey'auc, Rya'c is a young warrior who has followed his father in his quest to free all Jaffa from Goa'uld oppression. When he was a young boy, his mother Drey'auc told Rya'c that his father was killed, to discourage him from discovering that Teal'c had betrayed their god, Apophis.

Teal'c attempted to prevent Rya'c from going through the prim'tah ceremony, hoping he would not become a slave to the Goa'uld. However, as Rya'c grew sick, Teal'c gave up his own symbiote so that his son could survive.

Rya'c demands his freedom to return to Apophis. From "Family"

A year later, the boy was taken captive by Apophis and brainwashed to believe Teal'c to be a traitor. Deceiving Teal'c and the rest of the team, Rya'c went to Earth with plans to destroy it with a biological weapon concealed in two of his teeth. He was discovered and stopped, and eventually freed from Apophis's mind control.

Having nothing to go back to on their home planet of Chulak, Drey'auc and Rya'c went to live with Tuplo's people in the Land of Light. As the boy grew into a man, he continued to feel shame that his mind was taken over by Apophis -- a sign of weakness. The two eventually joined a settlement of rebel Jaffa, where Drey'auc died after her larval symbiote matured and she refused to take on another.

Rya'c did not see his father again until his mother's death. He had lost faith in the fight against the Goa'uld. Filled with rage against his father, their relationship was only mended when Teal'c professed his faith in his son's strength -- and told him that he, too, had once been brainwashed by Apophis. Rya'c regained his confidence in himself and in his father's cause, and joined Teal'c and Bra'tac on a mission to destroy Anubis's new weapon and save Earth.

Rya'c joined Bra'tac to continue his training as a warrior, and to spread the word of the Jaffa rebellion.

Rya'c at his wedding. From "Sacrifices"

He met and fell in love with Kar'yn, a member of the Hak'tyl resistance and a pupil of Ishta. They were pledged to be married, but a few days before the ceremony they had to be evacuated to Earth after Hak'tyl (I) became compromised. The marriage nearly failed to happen as Kar'yn objected to parts of the ceremony that made her subservient to Rya'c, but eventually it proceeded, presided over by Bra'tac. The newly married couple then headed off to the same planet that his parents had held their Shim'roa on.

Bloodlines - Teal'c and SG-1 return to Chulak to prevent his son from being implanted with his first larval symbiote -- and thus enslaved to the Goa'uld. But they are too late, and Teal'c must sacrifice his own symbiote to save Rya'c's life.
Family - Rya'c is captured by Apophis and brainwashed, calling Teal'c a traitor. When SG-1 frees him and brings him back to Earth, they find that Apophis has sent him with a hidden biological agent to wipe out all life on Earth. He is freed from Apophis's control, and sent to live with his mother.
Redemption, Part 1 - When Rya'c's mother dies in a Jaffa refugee camp, the young man blames his father. But he and Teal'c are reconciled when Teal'c expresses his confidence in his son.
Redemption, Part 2 - Rya'c joins Teal'c and Bra'tac on a mission to destroy a weapon Anubis is using to try and destroy Earth's Stargate, and must save his father after they are captured.
Orpheus - SG-1 must rescue Rya'c and Bra'tac, who have been captured and sent to work in a Jaffa death camp.
Sacrifices - When Rya'c is due to get married, but his forward-thinking bride objects to more traditional elements of the ceremony.