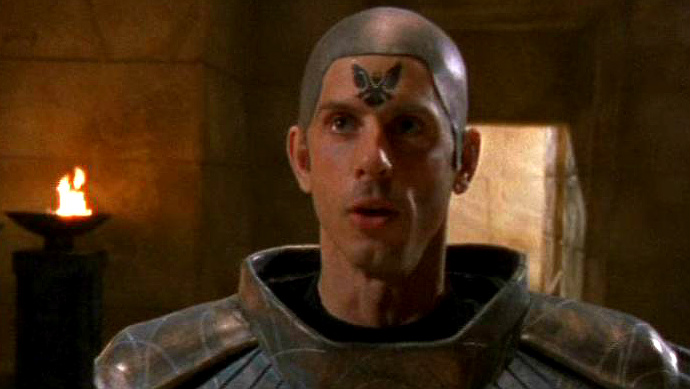 Jaffa in the service of Heru'ur. Ryn'tak was on the planet Cimmeria when Heru'ur arrived to claim it as his own. Ryn'tak likely left Cimmeria before the Asgard arrived, as every Jaffa present was absorbed by Asgard beams while Heru'ur made his escape through the Stargate.

Ryn'tak later traveled with Heru'ur to Abydos via a pyramid ship. Once on the surface Heru'ur instructed him to find the child of Apophis, Shifu. The child had not yet been born, as the pregnant queen Amonet was hiding among the people. Ryn'tak questioned many of the Abydonians in his search and learned that she was indeed hiding somewhere in the city. But he was unable to locate her in time to acquire the child.

Thor's Chariot - Ryn'tak helps his god occupy Cimmeria after word that the hammer device has been destroyed has proliferated through the Goa'uld domain.
Secrets - Ryn'tak moves through the Abydonian city, questioning many for any sign of Amonet and her child.