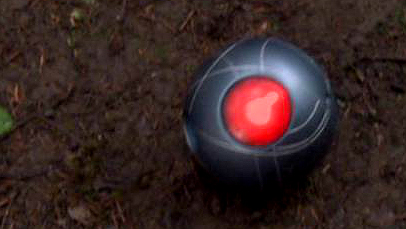 Hand-held device used by Jaffa, capable of blinding and rendering an entire room of individuals unconscious. Shock grenades work with optically-overloading bright light and piercing sound to render their targets immobile. A concealed button the side of the device can activate it for programming. It is then rolled down a corridor or into a room, where it initiates the violent pulse.

The shock grenade is equally effective when used outdoors.

The Serpent's Lair - SG-1 is disabled by a Goa'uld shock grenade, later using the technology to knock out all Jaffa within the glider bay of Apophis' mothership.
Enemies - O'Neill uses a shock grenade to immobilize Teal'c's team of Jaffa, but is unsuccessful in disabling the First Prime, who has anticipated the tactic.
Prophecy - Jonas as a premonition of a Jaffa attack on Stargate Command, in which they throw a shock grenade through an open Stargate to disable defense personnel.
Orpheus - Rak'nor arms a shock grenade to travel ahead of a team intending to retrieve Bra'tac and Ry'ac from Erebus.
Moebius, Part 2 - In an alternate timeline Jack O'Neill leads a team to Chulak, where Apophis's Jaffa use a shock grenade to capture them in the forest.