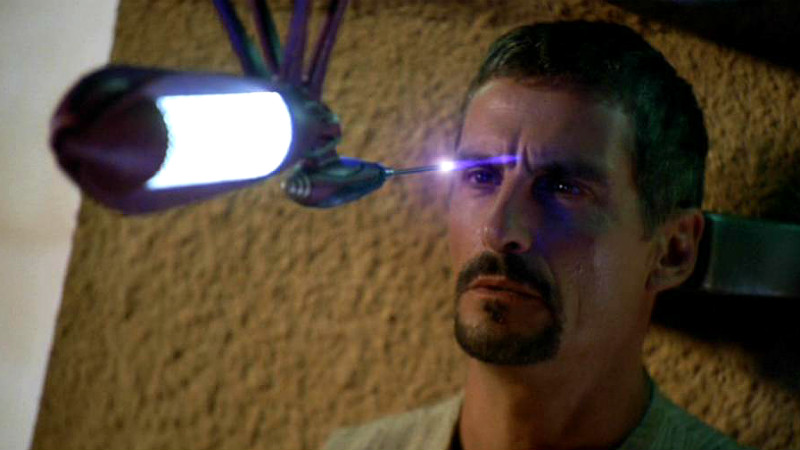 Process by which a Goa'uld symbiote is removed from a human host body, freeing the host from the parasite's control. The process has been developed by the Tok'ra, a Goa'uld underground movement opposed to the forced oppression of humans and other species. The process attempts to prevent the Goa'uld from releasing a toxin that, under other circumstances, will kill the host -- though it does not guarantee that the host will survive the dangerous extraction process itself. And sometimes the symbiote is extracted successfully but is able first to secrete its deadly toxin.

The symbiote, meanwhile, usually does not survive the process. And extraction is believed to be extremely painful to both host and symbiote.

Scans of the patient can aid in the extraction process by identifying the symbiote's precise position.

Extraction uses a number of techniques. In one case an advanced technology penetrates the host's forehead, pulling (or perhaps transporting) the snake-like symbiote into a glass tube attached to the device. At the head of the extraction device is what looks like a long, thick needle, led by a blue tracking beam.

The event often occurs as part of an hours-long extraction ceremony, pseudo-religious in nature, in which the Tok'ra chant in slow monotone a list of the Goa'uld's crimes over the eons of its life.

Pretense - Following his triad on Tollana Skaara is freed from the Goa'uld Klorel, with help from the Tok'ra.
Dominion - Ta'seem of the Tok'ra tries to extract the symbiote Baal has placed within Adria.
Stargate: Continuum - Baal's symbiote is removed and executed at the end of a long extraction ceremony, attended by SG-1 on the new Tok'ra homeworld.