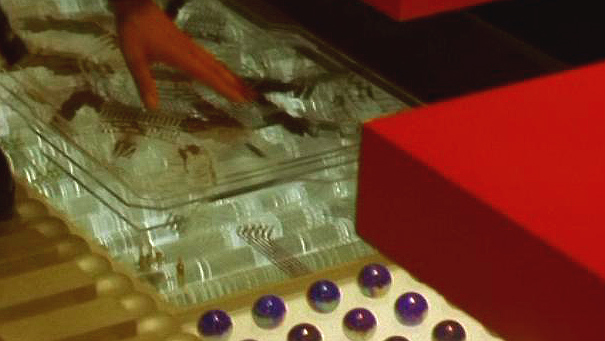 Device of Asgard design which creates a large-scale time dilation field, within which time passes exponentially more slowly. The technology was developed in the hopes that the Replicators could be trapped in a bubble in order to decrease their rate of evolution and expansion within Asgard territory -- at least long enough for Asgard scientists and strategists to find a way to defeat the enemy.

The time dilation device is capable of generating a field radius of point-one-six light years. Within the bubble time is slowed down by a factor of ten to the fourth power: one year to the Replicators would be 10,000 years for everyone else.

The time-dilation device was constructed within one of the oldest structures on the planet Halla, the first world settled by Asgard colonists. The device was encased in a solid neutronium shell and set with a time delay sufficient to evacuate their entire civilization. Eventually the Replicators would have eaten through the shell, but only long after the device had activated. This calculation was made with a considerable margin for error.

Unfortunately, the plan did not work. The Replicators penetrated the technology and successfully reversed it, speeding up their evolution and allowing them to multiply and consume the world in what would have been mere moments to an outside observer. Within hours, hundreds of billions of blocks had paved a probable multitude of layers of the surface of Halla.

The Asgard Thor requested the aid of SG-1, who landed the Prometheus on Halla and, after encountering a group of humanoid Replicators, successfully returned the device to normal. The trap lasted for approximately 18 months, after which the Replicators were able to break free.

Unnatural Selection - Thor explains the principle of the time-dilation device and how it did not work, pleading with SG-1 to aid his civilization in setting the technology right again.
Ripple Effect - As requested, Kvasir brings a time-dilation unit to Earth so it may be used in taking Prometheus close to a black hole.