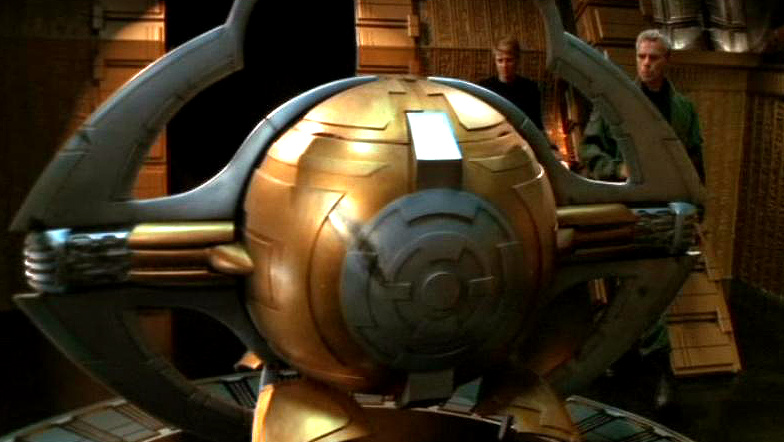 Large, spherical mine, one of countless thousands which patrol and defend the long-deceased population of the planet Tobin. The mine has advanced sensors which allow it to coordinate and alter its position among other mines and to prevent it from coming under attack. Any external contact with the mine results in immediate detonation, save for one cross-hair at the base of the device.

Rotating the hand control in the interior of the mine allows a combination to be entered. From "The Serpent's Venom"

Upon pushing this cross-hair, the bottom of the mine opens into four different pieces to reveal a disarming mechanism, composed of coded orange and blue lights and a rotating hand control for allowing input. Entering a three-coded combination allows one of two outcomes to occur: If the combination is correct, the mine allows itself to be reprogrammed to hone in on a specific target. If incorrect, the user has five minutes to input the correct combination before it explodes.

Tobin mines are sensitive to activity in the vicinity, and will move en masse, swarming on a target, if it determines the planet is threatened. A single mine is undetectable by the most advanced Goa'uld ships, allowing the device to penetrate and detonate against Goa'uld shields. However, the mine itself cannot detect ring transport, allowing it to be safely ringed aboard Goa'uld and Tok'ra vessels for disarmament.

The Serpent's Venom - SG-1 and Jacob/Selmak ring a Tobin mine aboard a Tok'ra cargo ship in hopes of reprogramming it to thwart the Apophis/Heru'ur alliance.