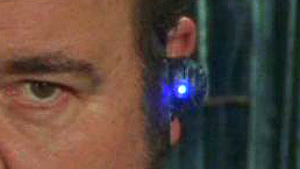 Device designed by Togar, capable of sensing and interpreting information transmitted from Urgo -- a piece of technology designed to collect data from alien species, who normally can only be seen and heard by someone with an Urgo implant in their brain. The unit is worn over the ear.

If Urgo speaks the dialogue can be transmitted to the user, avoiding the need for the operator to have a brain implant of his own in order to communicate with the Urgo interface. It is not known if the visual image is transmitted as well, though what looks like a blue detection device on the front of the unit would make this likely.