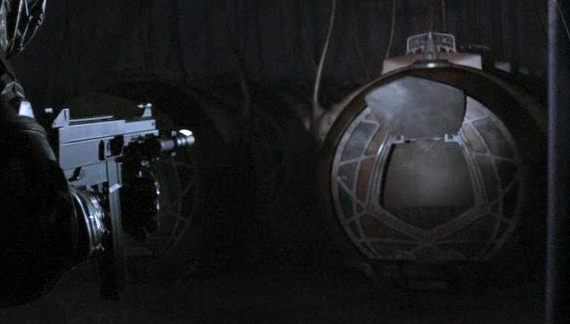 Long-term stasis technology developed by the Ursini, inhabitants of a distant galaxy through which the Ancient exploratory ship Destiny passed. The Ursini appear to use the pods for a variety of purposes, on board their own ships and places where they leave their people for long-term reconnaissance.

The pods are outfitted with neural stimulators designed to keep their occupants' brains active during extended hibernation. The technology is compatible with other species: when Colonel David Telford was stranded on an Ancient seed ship with a group of Ursini, they hooked him up to one of the pods. He later described the experience as "like watching an entire film library in less than a day." He was rapidly exposed to thousands of images, so that over a span of time he was able to form a basic understanding of the Ursini and their history -- and establish rudimentary communication with them.

For the Ursini, this aspect of the technology helps to keep their minds active and engaged during hibernation. The pods also provide their inhabitants with basic nutrients to sustain their bodies.

It seems standard that the spheroid pods are grouped together in a single, large compartment, and connected with some sort of tethers -- perhaps to the ship's systems, perhaps to one another.

Awakening - The crew of Destiny realize they are not alone when they find several empty alien stasis pods on board an Ancient seed ship.
The Greater Good - Young and Rush board an Ursini mothership, and find several empty stasis pods just like those seen on the seed ship.
Resurgence - Telford reports that he used one of the pods on the seed ship, which helped him learn about the Ursini and communicate with them.