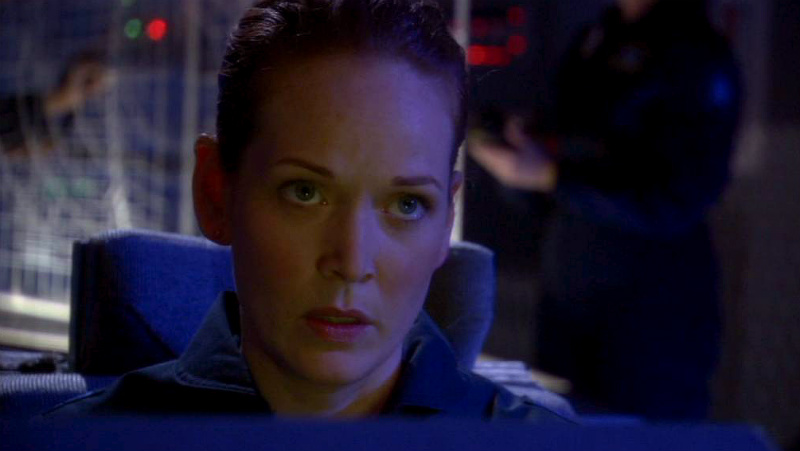 Lieutenant, comm officer aboard the United States Air Force vessel Prometheus. Lt. Ambrose has maintained her station, and composure, through numerous battles and countless searches conducted in the vicinity of Earth and its moon.

Ambrose was present when the Prometheus traveled to Tegalus to attack and destroy an Ori satellite weapon. Instead, Prometheus was destroyed by the device in just four shots, but Ambrose was among the crew who managed to evacuate. She was later assigned to piloting duty on board the Odyssey, now wearing a name tag reading "Jennings" (suggesting that, if she is indeed the same character, she has changed her surname).

Note: This character is identified as "Womack" in the end credits for "Ethon." We have opted for this name instead as it appears on-screen, on the character's name tag in multiple episodes.

New Order, Part 2 - Ambrose and Colonel Pendergast greet Teal'c and Thor as they enter Earth's solar system.
Endgame - Ambrose continues her search of Osiris's Al'kesh, cloaked somewhere in the vicinity of Earth.
Full Alert - Ambrose mans her station as the Goa'ulded Trust attack Prometheus with their Al'kesh, just before Prometheus destroys it.
Ethon - Ambrose is forced to evacuate Prometheus prior to its destruction in Tegalus orbit, and is one of 76 survivors.
The Pegasus Project - Now named "Jennings," Catherine is the Odyssey's pilot under Colonel Paul Emerson, joining the ship's special mission to the Pegasus Galaxy.